Although there are many issues Joe Biden will address now that he has defeated Donald Trump to win the 2020 presidential election, Biden's policies are likely to have an impact on the world of sports.

Decisions on many key sports issues — such as stadium financing and sports gambling — are often made at the state or local level, so a change in the White House probably won't prompt a dramatic shift. In other ways, though, the election of Biden and his running mate, Kamala Harris, could lead to change. 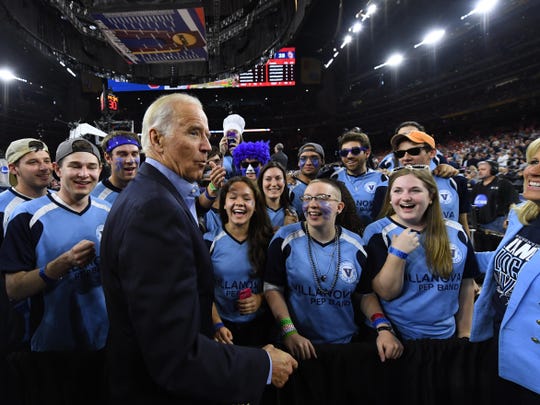 "It will be nice as a sports fan — and also as somebody that follows the business of sports — to have less acrimony between government and sports," said Patrick Rishe, a sports business professor at Washington University in St. Louis.

Here are four potential sports ramifications of the presidential election, from the extremely broad (the country's COVID-19 response) to the extremely narrow (sports teams celebrating championships at the White House).

Biden made the nation's COVID-19 response a key pillar of his campaign. And although it is not an issue specific to sports, that response — and how it changes under a Biden administration — has had and will continue to have a significant impact on sports at all levels. It could be particularly pivotal for pro sports leagues such as the NBA, NHL and MLB, all of which are hoping to welcome fans back to their games next year.

Biden has appeared more willing than Trump to aggressively address COVID-19 in the short term with hopes that it will curtail the spread of the disease in the long term. He has supported a national mask mandate and said in August that he would implement a national lockdown if scientists recommend taking that step.

"If you have a reproduction rate in a community that's above a certain level, everybody says, slow up," Biden said during a presidential debate. "More social distancing. Do not open bars and do not open gymnasiums. Do not open until you get this under control, under more control."

What exactly does that mean for sports? It's too early to tell, and difficult to unspool all of the potential effects. But what's clear is that Biden's approach to COVID-19 will be significantly different than Trump's, and the ripple effects of that shift will be felt across industries — sports included.

With Trump in the White House, the U.S. Department of Education — led by Betsy DeVos — has made or pushed for several changes under the umbrella of Title IX that have sports implications.

For example, the department implemented regulations that altered the handling of sexual assault allegations on college campuses, giving schools more leeway in deciding whether certain employees, such as coaches, must report allegations to the Title IX office. It also has argued that allowing transgender athletes to compete as girls violates the rights of cisgender athletes.

Biden has pledged to reverse course on both fronts and more closely align with the policies and processes of Barack Obama's administration — in which Biden was, of course, the vice president. His campaign platform, for instance, includes a promise to "restore transgender students' access to sports … in accordance with their gender identity" on his first day in office.

The rights of college athletes — including whether and how they should be able to profit off their name, image and likeness — have generated significant discussion in Congress. And, to be clear, the eventual makeup of both the House and Senate will have more of an impact here than who occupies the White House. While there's been bipartisan interest in addressing name, image and likeness, Democratic legislators have been more willing to consider a more comprehensive reform of the NCAA, while Republicans' interests are more narrow.

With all of that said, Biden's victory does mean that Democrats in favor of NCAA reform will have an ally in the White House in Harris. During her tenure in the Senate, she was among those who supported a college athletes "bill of rights," a proposal that goes beyond issues of name, image and likeness and calls for a host of other benefits for athletes.

It's the least consequential change on this list, but it will be a change nonetheless: With Biden as president, more championship sports teams will likely visit the White House — particularly in basketball and women's sports.

Championship visits have been put on pause due to the COVID-19 pandemic, but prior to that, Trump had yet to host a championship team from the NBA or WNBA at the White House — either because he declined to extend an invitation, members of the team said they wouldn't attend or, in some cases, both. (Trump did, however, host the Baylor women's basketball team in 2019.)

While some athletes might still choose to skip the ceremonial trip because of Biden's presence, as a few did when Obama was in office, it will likely go back to being more of a routine than a question mark.

END_OF_DOCUMENT_TOKEN_TO_BE_REPLACED

END_OF_DOCUMENT_TOKEN_TO_BE_REPLACED
Recent Posts
We and our partners use cookies on this site to improve our service, perform analytics, personalize advertising, measure advertising performance, and remember website preferences.Ok