Home » Sport » Have we seen the best Trbojevic yet? Kid brother joins Tom and Jake

Have we seen the best Trbojevic yet? Kid brother joins Tom and Jake

Manly are one step closer to fielding three Trbojevic brothers in the same NRL team with 18-year-old Ben re-signing for the next two seasons.

Less than a week after older brothers and representative stars Jake and Tom signed with the club until the end of 2026, their teen brother has pledged his commitment to the Sea Eagles. 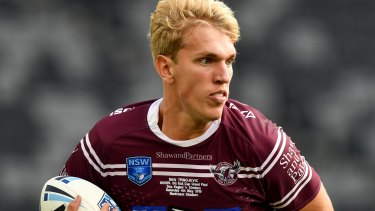 A well-built centre or back-rower, Ben is yet to make his NRL debut, but is a chance to play first grade alongside his brothers in 2020.

"Ben is a very talented young player who has done well coming through our junior ranks,'' coach Des Hasler said.

"There is no doubt he has plenty of ability and it's now a matter of further developing his game and bringing him through slowly as he steps up to the next level."

The teenager followed the footsteps of his older brothers through the junior grades at Mona Vale and has represented New South Wales under-16s and under-18s in the past few years.

He's considered a special talent and future representative star alongside his older brothers.

Trbojevic has been signed as part of the Sea Eagles development squad and would need to be upgraded to the NRL's top 30 list to be eligible to make his first-grade debut.

Related posts:
best, have, seen, The, Trbojevi, We
Celebrities

END_OF_DOCUMENT_TOKEN_TO_BE_REPLACED

END_OF_DOCUMENT_TOKEN_TO_BE_REPLACED
Recent Posts
We and our partners use cookies on this site to improve our service, perform analytics, personalize advertising, measure advertising performance, and remember website preferences.Ok