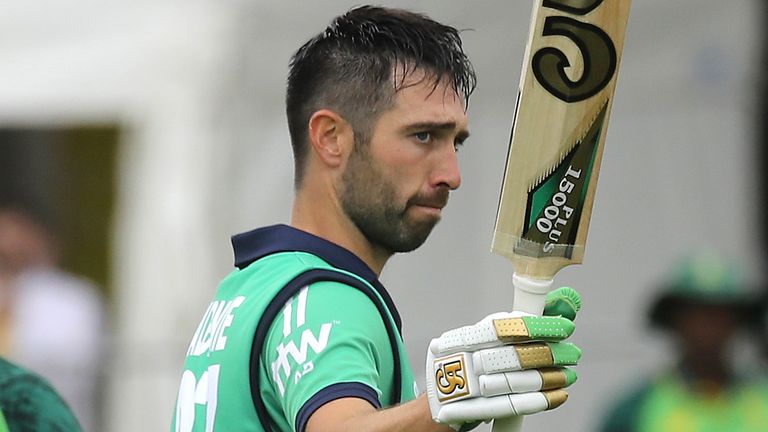 Captain Andy Balbirnie scored 102 from 117 balls as Ireland recorded their first-ever win over South Africa with a 43-run victory in the second ODI at Malahide.

Balbirnie struck 10 fours and two sixes in his seventh ODI century, while Harry Tector (79 off 68) hit six fours and four sixes as the hosts posted 290-5 from their 50 overs before dismissing the Proteas for 247 in 48.3 overs in reply.

Mark Adair, Josh Little and Andy McBrine each picked up two wickets for Ireland, with South Africa fading from 159-2 once top-scorer Janneman Malan (84 off 96) was out to George Dockrell.

Ireland lead the three-match series 1-0 after Sunday’s opening ODI at the same venue was abandoned due to rain, with Balbirnie’s men now hoping to wrap up a famous series victory by winning the final game on Friday.

Balbirnie shared half-century stands with Paul Stirling (27), McBrine (30) and Tector, while Tector and Dockrell (45 off 23) then plundered a 90-run partnership from just 46 deliveries at the death before falling to Andile Phehlukwayo in the final over.

South Africa were sloppy in the field, dropping Stirling on six and 10, Tector on nought and Balbirnie on 74.

The visitors, who rested Quinton de Kock, then lost Aiden Markram (5) and skipper Temba Bavuma (10) early in the chase, only for Malan and Rassie van der Dussen (49) to put on 108 for the third wicket.

However, Malan and Van der Dussen then fell to spin in the space of eight deliveries and the Proteas’ innings fell apart, with Adair dismissing Keshav Maharaj and Anrich Nortje from successive balls in the 49th over to clinch a famous Ireland win.