The St Louis Post-Dispatch didn't do their ice hockey team any favours before game six of the Stanley Cup finals on Monday (AEST), after publishing a premature celebration.

Hours before the Blues were to host the Boston Bruins with a chance to win the Stanley Cup, the newspaper published multiple congratulatory advertisements and a letter from Blues owner Tom Stillman thanking the fans for helping the franchise win its first Stanley Cup in its digital editions.

Those who are superstitious were validated as the Blues lost game six by a 5-1 score and they will need to win game seven on the road on Thursday (AEST).

"Winning the Stanley Cup was a dream come true for so many of you," Stillman wrote. "All of us will remember where we were, what we did and how we felt when the Blues brought the Cup home. Each of us will have a library of memories to pass down for generations."

Stillman said that the Blues' season "will go down as one of the most memorable championship campaigns in NHL history" … and even mentioned a celebratory parade.

"We are so very proud of our players, our organization and our fans. And now, together, we can finally say 'We won the Cup for St Louis,'" Stillman wrote. "We look forward to celebrating with you as we parade the Cup down Market Street." 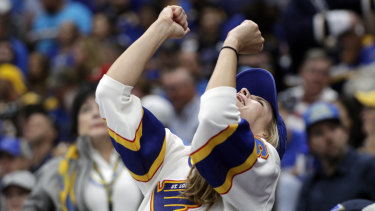 A St Louis fan reacts as the Bruins pulled ahead in game six of the Stanley Cup.Credit:AP

Among the advertisements was one from Enterprise – title sponsor of the team's arena – congratulating the Blues on "winning the Stanley Cup".

The snafu certainly proved embarrassing in the wake of the game six loss, and would be compounded if the Bruins win the final game, in Boston, to take the Stanley Cup.

The Bruins are looking to become the ninth team in NHL history to overcome a 3-2 series deficit in the Stanley Cup final – a feat last achieved by them in 2011.

Boston opened the scoring on a five-on-three powerplay nine minutes into the game when Marchand fired a one-timer from a tough angle that went over the glove of Blues rookie goalie Jordan Binnington and into the top corner.

The Bruins padded their lead just over two minutes into the third period when Carlo's one-hopper from the blueline dribbled through Binnington's legs while Kuhlman scored the dagger at the midway mark of the period.

Blues forward O'Reilly got one back with eight minutes to play when his shot barely crossed the goal line before Bruins goalie Tuukka Rask got a pad on it.

A video review confirmed the puck had crossed the line.

For St Louis, game seven will be their second chance to end the longest wait in NHL history – 51 seasons – for a team to win their first championship.