In N.F.L. parlance, Keith McCants was a “can’t miss.” A relentless and powerful athlete, he was a first-team all-American linebacker at Alabama and was drafted fourth overall in 1990 by the Tampa Bay Buccaneers. His success seemingly guaranteed, the team made him the highest-paid defensive player in the league.

But McCants soon became known by a less flattering N.F.L. moniker: “draft bust.” Days after being chosen by the Buccaneers, he had knee surgery. A year later, he had to learn a new position when he was moved from linebacker to defensive end. The injuries and frustrations mounted as he tried to meet people’s outsized expectations.

His promise unfulfilled, the Buccaneers released McCants after three years. He spent three more seasons with the Houston Oilers and Arizona Cardinals before he left the league, his money and celebrity diminished. What remained was an overpowering addiction to painkillers, and eventually to other drugs, that consumed the rest of McCants’s life and turned him into a cautionary tale.

After decades of drug abuse, numerous arrests, dozens of surgeries and years living on the street — all punctuated by brief stretches of sobriety — McCants was found dead early Thursday morning at his home in St. Petersburg, Fla. He was 53.

The cause appeared to be a drug overdose, but Amanda Sinni, a spokeswoman for the Pinellas County Sheriff’s Office, said the department was awaiting a report from the medical examiner’s office.

In and out of rehabilitation and eager to share his story to warn others away from drugs, McCants all but predicted his demise in 2015, when he was interviewed by The New York Times.

Keith McCants on His Career, Addiction and Redemption

During six seasons in the N.F.L., Keith McCants became addicted to painkillers, and later went to jail, lived on the street and battled depression. He was interviewed by The New York Times in this 2015 video.

KEITH: I went in with a bad leg, and I came out worse than ever, and if I knew what I knew today, I wouldn’t have done it.

KEITH: the NFL th-, they know what they gonna do before they do it. They’re very well organized, it just it’s like uh, organized crime

KEITH: and because I had a big salary, I was forced to play. I was forced to be on the field, and that, and any-, by any means necessary get McCants on the field. People come see him play. We don’t pay him to sit on the bench, not that kind of money.

KEITH: My expectations, at twenty-one years old, was to get on the field and prove that I should have been the number one pick.

KEITH: If I was physically able to do it, it would have been no problem, but I did it with the help of medication

KEITH: . I didn’t do as great-,, as good as I shoulda’ done in the NFL, but I did pretty good-, I did pretty damn good

KEITH: some people say I was a bust. Well, I play that, I play out of the position, and I did it well, and on top of that I did it on one leg.

KEITH: but that’s when I had a breaking point, and when I jumped off the boat, shattered my knee and couldn’t um-, physically, I couldn’t no longer work or, hold a job. My body had deteriorated. I did not, that I know it was degenerative bone disease,

KEITH: and fifteen surgeries on this knee, four over here, and (Sigh), and you know (Unclear) the, the bad days and good days. That’s when the depression set in and depression is the third largest killer in the world. I came home (hard to understand) suicide and couldn’t be trusted.

KEITH: , I’m not a good criminal. (Laughs) I’m not a real criminal. I just (Unclear) to suppress my pain, and probably get me-, get-, get me through the day, so I’m gonna go on and do all this. I would have bought drugs from the police, it didn’t matter I was in so much pain.

KEITH: because I knew it was gonna hurt my family. I did not want to be able to live with the pain. You know when I say-, when I say you cover the pain up, I’d rather be dead that to go through this. I took my bed off, I tied it up on the-, on the rack, I put it around my neck and I hung myself. (Audio gets muffled as he demonstrates) I fell down unconsciously. Three weeks later I went to a (Unclear) recovery. Two, three weeks later, and this guy, was up there. He said, Mr. McCants you owe me a hug. I thought he was just a regular old Alabama fan. I said OK I got ya. I say OK I think I know you. He said you don’t know me. I was like, OK, uh, uh I think I know-, when I got to him, I hugged him, he hugged real tight, and he said um, now I’ll tell you where I know you-, you know me from. I’m the one who took you down when you hung yourself, and I prayed to god that you lived, and you rose up. (Choked up), 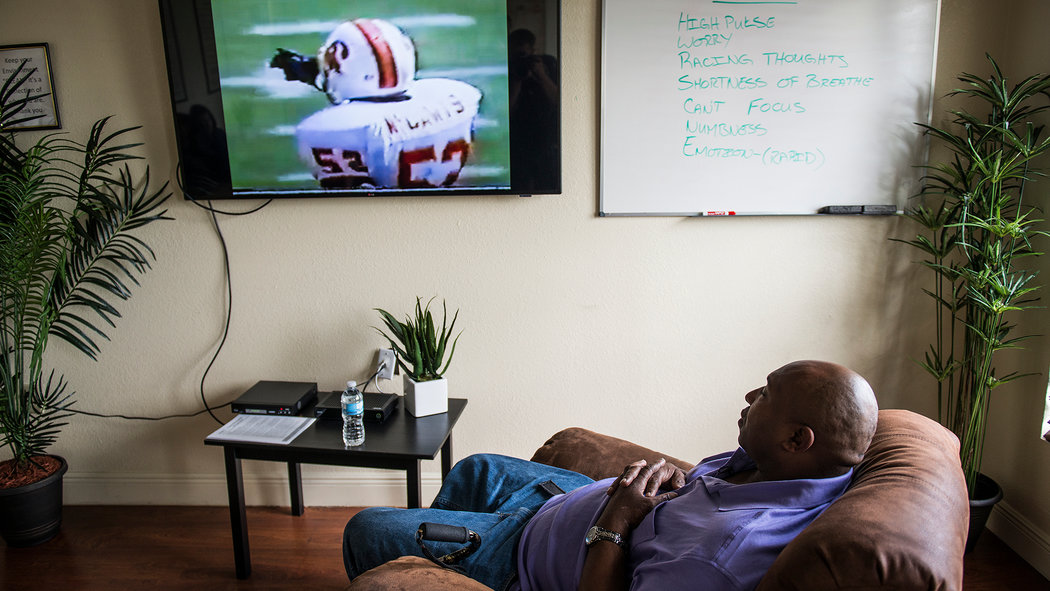 “I live one day at a time; I’m a recovering addict,” he said. “Tomorrow’s not promising. If I die today or tomorrow, I’m all right with that because I’m comfortable with me. My goal is to help people who can’t help themselves, to turn their negatives to positives, to give them hope. That’s what I sell.”

McCants did not just talk about his struggles with substance abuse. He pointed the finger squarely at the N.F.L. Coaches, he said, pushed players to perform without regard to their long-term health. Team doctors handed out painkillers like candy to mask injuries and get players on the field. And when players were unable to perform, he said, the league turned its back and focused on younger replacements.

“I will continue to tell the truth, how they got me hooked on drugs,” he said. “I feel it’s my duty as a retired player to explain the difference between being hurt and being injured.”

Alvin Keith McCants was born on April 19, 1968, in Mobile, Ala. His father abandoned him when he was young; he was raised by his stepfather, James Turner, who worked for the city, and his mother, Cinderella Turner, a cook. He is survived by two sons, Keith Jr. and David; two daughters, Aysha and Kera; two brothers, Robert and Anthony; and two sisters, Angie and Denise. He was married and divorced twice.

Widely scouted while at Murphy High School in Mobile, McCants enrolled at Alabama, home to one of the country’s premier football programs. He left for the pros after his junior year, a bold but contentious step at the time. He said he opted out of his senior year because he did not want to risk further injuries that might shorten his career, and because he needed to provide for his family while he could.

Some experts predicted that McCants could have been chosen first overall in the draft; he was ultimately picked fourth, one slot ahead of Junior Seau, a linebacker from the University of Southern California who played for 20 years and was elected posthumously to the Pro Football Hall of Fame in 2015. Seau killed himself in 2012 and was later found to have chronic traumatic encephalopathy, the degenerative brain disease linked to repeated hits to the head.

The Buccaneers had losing records each of McCants’ three years in Tampa, which heightened the scrutiny of his performance and his paychecks. (He received a record $2.5 million signing bonus as part of a five-year $7.4 million deal.) McCants lived the life of a celebrity player, spending freely. He said that he was preyed upon by financial advisers and others and lost $17 million.

He played in 88 games in his career and recorded 13.5 quarterback sacks and one interception.

After he left the N.F.L., McCants, who studied criminal law in college, became the first Black marine police officer in Alabama when he joined the state’s Department of Conservation and Natural Resources. He joked that he found it hard to arrest people because they often recognized him from his playing days and said they were fans of his.

Yet the power of his addiction proved strong. He lived on the street in Tampa for two years in the early 2000s, worked as a pimp and drug dealer, and spent time in jail, where he once tried to hang himself. He spent stretches in numerous rehabilitation facilities, only to succumb to drugs again once he got out, as he recounted in his 2018 memoir, “My Dark Side of the N.F.L.”

In recent years, seemingly at peace with his fate, he tried to warn others by talking about his financial troubles, his run-ins with the law and the pain — emotional as well as physical — that he buried with drugs.