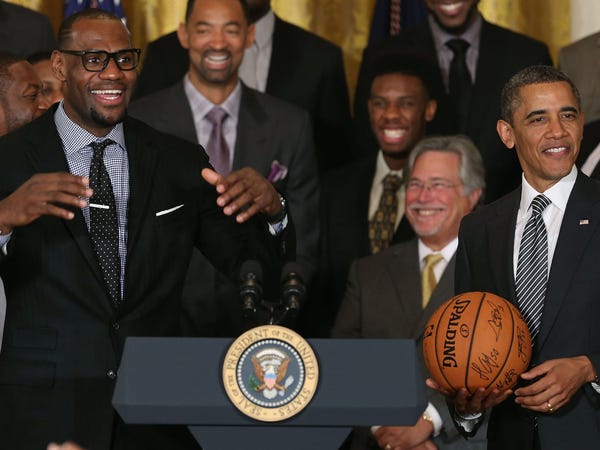 Former President Barack Obama took over the internet this weekend with a basketball highlight from the campaign trail.

And even the NBA's biggest star was impressed with Obama's smooth stroke.

While campaigning on behalf of former Vice President and current Democratic presidential nominee Joe Biden, Obama found himself in a gym and was caught on camera splashing a corner three. The former President shouted, "that's what I do!" as he turned to make his way out of the gym, while Biden and others who watched the shot drop through the net responded with a chorus of whoas.

The video of the shot went viral on social media and even prompted a response from LeBron James.

It wasn't the only time Obama and James interacted in recent days. The retired politician appeared on an episode of "The Shop: Uninterrupted" — the barbershop-themed talk show produced by and featuring James — that aired Friday on HBO.

"The King" visited the White House three times throughout Obama's two-term presidency: in 2012 and 2013 after winning back-to-back finals with the Miami Heat, and again in 2016 after leading the Cleveland Cavaliers to its first championship as a franchise.

Obama is an avid basketball fan and, in addition to keeping up with professional games and releasing annual brackets during March Madness, he would regularly play basketball throughout his presidency. He even once got stitches in his lip after taking an elbow to the face during a game at the White House.

While James and Obama share a love of basketball, both men are currently focused on efforts involving Tuesday's election. James has put his efforts into More Than a Vote, a nonprofit devoted to encouraging young Americans to register and vote in this election and beyond. Meanwhile, Obama has spent recent days campaigning for Biden in several states expected to decide the presidential election, including Michigan and Georgia.

END_OF_DOCUMENT_TOKEN_TO_BE_REPLACED

END_OF_DOCUMENT_TOKEN_TO_BE_REPLACED
Recent Posts
We and our partners use cookies on this site to improve our service, perform analytics, personalize advertising, measure advertising performance, and remember website preferences.Ok