LUIS ORTIZ edged closer to a shot at Tyson Fury's WBC belt with an incredible win over Alexander Flores.

The Cuban heavyweight, 41, demolished his opponent in just 45 seconds as he made his return to the ring. 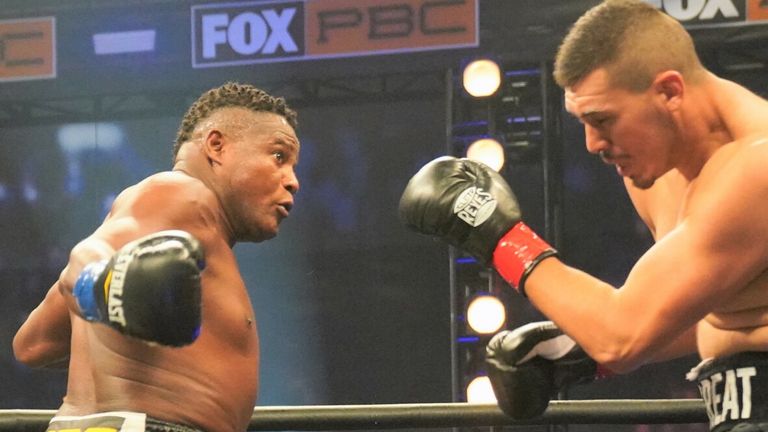 It was Ortiz's first fight since his defeat to Deontay Wilder in November 2019.

But he made no mistakes as he wiped out Flores within the first round in Los Angeles.

Ortiz landed a huge left hand before a solid right hook left the 30-year-old on the canvas.

American star Flores, who suffered the third defeat of his career, was unable to continue.

Ortiz now boasts an impressive record of 32-2 including 27 knockouts.

The victory has strengthened Ortiz's position as the No3 in the WBC heavyweight ranks.

Fury – who looks braced to scrap European champ Agit Kabayel next month – is the title holder.

Alexander Povetkin is the mandatory challenger following his win over Dillian Whyte.

But the pair are set to have a rematch on January 30.

Oleksandr Usyk has also warned Fury and Anthony Joshua that he will become the 'undisputed world champion' following his win over Dereck Chisora.

Reigning WBO, WBA and IBF heavyweight champ AJ returns to the ring on December 12 in an IBF mandated defence against Kubrat Pulev, 39.

END_OF_DOCUMENT_TOKEN_TO_BE_REPLACED

We will use your email address only for sending you newsletters. Please see our Privacy Notice for details of your data protection rights. The US is looking at unleashing a devastating military strike against Iran before President Trump leaves office, according to senior Israeli officials. The Israel Defense Forces (IDF)

END_OF_DOCUMENT_TOKEN_TO_BE_REPLACED
Recent Posts
We and our partners use cookies on this site to improve our service, perform analytics, personalize advertising, measure advertising performance, and remember website preferences.Ok