TORONTO — Drake is the Toronto Raptors’ most famous fan.

But in another courtside seat wearing a Raptors jersey, a turban and beard is the Raptors' most loyal fan.

Meet Nav Bhatia, a 67-year-old Indian-Canadian, who has been to every Raptors home game in the franchise’s 24-year history.

"Never been late, never left a game early — every minute of the game in the arena," Bhatia told USA TODAY in a phone interview.

That's 960 regular-season games and 50 playoff games. His streak will continue with Game 1 of the NBA Finals on Thursday, when the Raptors play host to the Golden State Warriors.

If you’ve attended games at Scotiabank Arena or watched Raptors games on TV, you’ve seen Bhatia. But you might not know who he is. 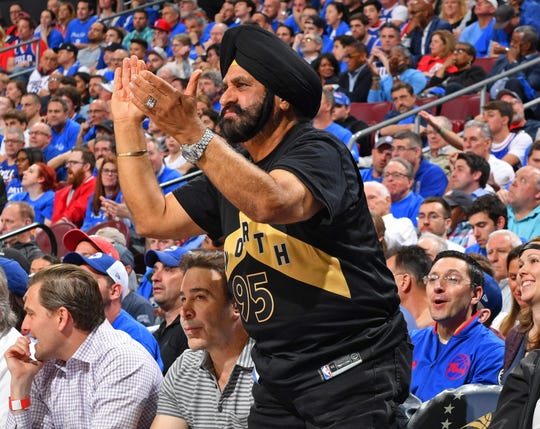 Nav Bhatia hasn't missed a Raptors home game in the franchise’s 24-year history. He also follows them on the road when he can. (Photo: Jesse D. Garrabrant, NBAE/Getty Images)

His story turned viral earlier this week when a journalist told Bhatia’s story in a Twitter thread. Bhatia arrived in Canada 34 years ago with an engineering degree but couldn’t find a job. He began selling cars and proved to be an outstanding salesman. He became the general manager of a dealership, eventually bought it and now owns multiple car dealerships.

About the same time his car sales career took off, he sought a hobby. So he attended the first game in Raptors history, Nov. 3, 1995, and saw a 94-79 victory against New Jersey.

"I don’t drink. I don’t smoke. I don’t womanize. I just Raptorize," Bhatia said. "I went to the Raptors, and then I got addicted. It is the best game, the most exciting game on this planet."

Even during the lean seasons — 16 wins in 1997-98 and 24 wins in 2002-2003 — and all the disappointments (the Vince Carter trade, Chris Bosh and Tracy McGrady leaving, losing to Cleveland and LeBron James three consecutive seasons), Bhatia's faith in the Raptors didn't waver.

MORE FROM THE NBA FINALS

Why did he stick with the Raptors?

"The big hope," he said. "People would ask, 'Why are you going to Raptors games? They suck. You’re wasting your money.' But you know what, I’m a loyal."

In 1999, then-Raptors general manager Isiah Thomas bestowed upon Bhatia the title of superfan. Around the same time, Bhatia was getting his phone fixed at a store when another customer, according to Bhatia, told the caller on the other end, "Hey, I’ve got to go, my cab driver is here."

Bhatia looked around, saw no one else and realized the man assumed Bhatia drove cabs. He decided to try and turn that into a positive.

“I went to the Raptors and bought 3,000 tickets and brought kids from a cross-section of the community,” he said.

“I wanted all kinds of kids to sit together and integrate with each other so they don’t have to go through what I was going through at that time,” Bhatia said. “It was 'How do I change that perception?' "

Bhatia is a unifier. During the Eastern Conference finals, a Milwaukee Bucks fan sent an offensive Tweet regarding Bhatia’s turban. The tweet and account were deleted, but Bhatia reached out to the man and they have tentative plans to meet.

“He apologized, and I’ve forgiven him,” Bhatia said. “I’m going to take this gentleman and his son to dinner and I’m going to give him some basketball presents. We’ve taken a negative situation and turned it into a positive.”

“We’ve never been in this position. We’ve only dreamt of it,” Bhatia said. “All of a sudden now, we are in the NBA Finals and we are playing against the best team in the league, who are champions. This is exciting for us here. Everybody’s talking about it. Even the people who are hockey people, they’re talking about the Raptors.”

"I believe we are (on) a mission and are going to get this one game at a time,” Bhatia said. “It might be a long one. I know Golden State is the favorite, but I’m going to tell you we’re going to win in seven."