Miami wide receiver Romello Brinson may have made the catch of the year in the Hurricanes’ romping of Central Connecticut State on Saturday.

With the Hurricanes already up 49-0, quarterback Jake Garcia went going for more. Brinson appeared to be completely covered in the end zone by a Central Connecticut State defensive back when he went vertical and somehow managed to come down with the football for a touchdown. 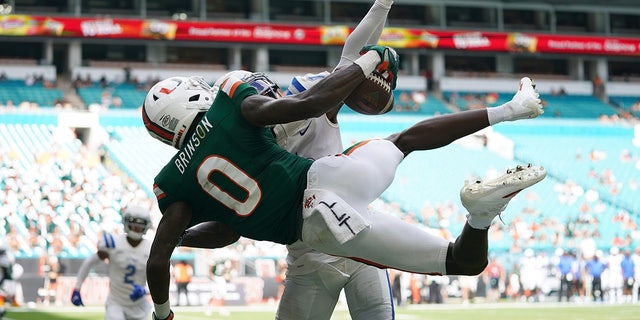 It was Brinson’s first touchdown of his collegiate career, and has to be under consideration for best catch of the season with Oklahoma cornerback D.J. Graham’s interception last week.

The college football world was in shock over the catch.

Miami secured a 69-0 victory over the Blue Devils after getting embarrassed at home by Michigan State last week. The Hurricanes were also without starting QB D’Eriq King, who was sidelined with a shoulder injury.

Miami is now 2-2 with a Thursday night matchup against Virginia.