The head of the United States Golf Association is among the most powerful figures in golf. Mike Davis’s retirement as the organization’s chief executive a week after this year’s United States Open — his 32nd — provides a moment to look back for the game of golf.

Davis, who played college golf, has worked for golf’s governing body in America for nearly his entire career. He is proud of the organization’s accomplishments that go beyond golf championships, which include the U.S. Open and six other events.

Davis, who became executive director in 2011 and chief executive in 2016, has thrown the organization’s influence behind programs that have expanded the game to children, including First Tee, and increased the participation of women in the sport, with Girls Golf.

But Davis, 56, is also proud of what the U.S.G.A. has done for the maintenance of golf courses, like water conservation and grass research, all with an eye on the environmental impact and cost savings. As recognition, the organization’s Turfgrass Environmental Research Program is being renamed the Mike Davis Program for Advancing Golf Course Management.

None of this would be possible if the U.S. Open were not a success. It brings in 75 percent of all the organization’s $200 million in annual revenue. And Davis has kept a keen eye on ensuring the financial stability of that major, starting when he was part of the U.S.G.A.’s decision in 1993 to bring all matters surrounding the U.S. Open in house.

Davis, who plans to form the golf architecture firm Fazio & Davis Golf Design with the course designer Tom Fazio II, will be replaced by Mike Whan, commissioner of the L.P.G.A. Tour.

The following interview has been edited and condensed. 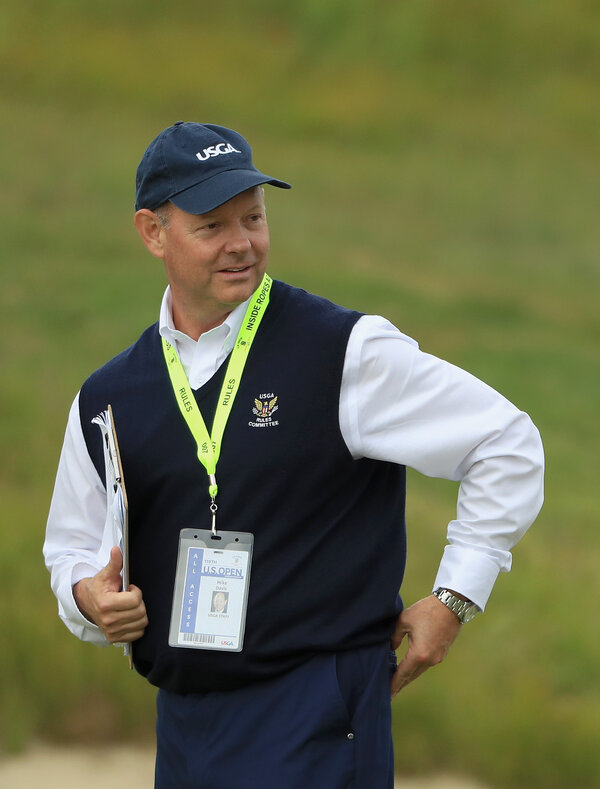 I worked in Atlanta with a firm that did commercial real estate. Out of the blue one day I got a call from Mike Butz, who was then the No. 2 at the U.S.G.A., under David Fay. Mike and I had grown up in the same hometown in [Chambersburg] Pennsylvania, but I didn’t know him well. He said we have an opening at the U.S.G.A. I wasn’t sure I even wanted to do it. I remember driving up and seeing Golf House [U.S.G.A. headquarters]. It was an image ingrained in my mind since the 1970s. I took the job.

What was your first job at the association?

I got hired with a focus on championships. I was a kid in a candy store. It wasn’t just meeting people like Arnold Palmer, Jack Nicklaus and Seve Ballesteros. It was getting to see the country’s great courses. That was truly as meaningful to me as meeting some of the greats in the game. At the same time, I got involved in the Rules of Golf. When I got good with the governance, when I got good putting on events like the U.S. Open, when I got comfortable inside the ropes, that was a turning point. Still, if it’s the U.S. Open and a rules situation comes up, there’s pressure. In 1993, at Baltusrol, I got called in for a second opinion. The player in question was Ballesteros, one of my heroes. We were denying him relief. I upheld the ruling. You have those memories that involved great players and lots of pressure.

You’re known for how you set up championship courses differently. What influenced you?

I remember going to the 1980 U.S. Open at Baltusrol with my dad. On that Friday, Keith Fergus hit his ball on the fifth hole just barely into the rough on the right side. I watched Fergus swing, and he moved his ball five feet. His fellow competitor had hit a horrible shot that was so far off line, out by the rope line where the grass was trampled down, that he had a better lie. He then knocked it 15 feet from the hole. I turned to my dad and said, I know golf is random, but that’s unfair. In my tenure we moved the rope lines out more. It wasn’t spectator friendly, but it kept the championship pure. Then we introduced graduated [lengths of] rough. It allowed the players to showcase their shotmaking skills. There had been this template for U.S. Open courses — narrow fairways, high rough and fast greens. We wanted to move teeing grounds around more and showcase the architecture. We wanted to penalize bad shots and reward good ones, but we also wanted to see players think more about the clubs they were using. It introduced a lot of course management.

The U.S.G.A. has always attracted criticism. What criticism during your time was justified?

No doubt, we made our fair share of mistakes. One of the biggest examples was what happened with Dustin Johnson at the U.S. Open at Oakmont in 2016 [when he was assessed a one-shot penalty for his ball moving — seven holes after the infraction]. Then there’s criticism around governance. When we said we’re not going to allow anchoring of putters [steadying the handle against the stomach], people got angry. It’s the same thing with distance. If we think it’s in the best interest of the game, we’ll act. Governance isn’t easy. You have to think long term, and then you just take the punches.

What did you like the most about your time leading the association?

I liked setting up championships and governance. We were willing to take on some tough issues, and we weren’t always right.

How did course design become your next career?

Going back to my junior days, I’ve had this fascination with golf courses. One of the things I got to do with the U.S.G.A. is see most of the world’s great golf courses. This had been in the back of my mind. I don’t know if I’m going to be good at it, but I’m going to be passionate about it.

I don’t think so. I was probably at my best as a junior golfer. College golf, I wasn’t quite as good. I won a few things nationally, but I didn’t qualify for any U.S.G.A. competitions. I’m still a 5 handicap. But there’s a huge difference between being a 5 handicap and a scratch golfer. I will start playing in club championships again, which I haven’t done in 25 years.