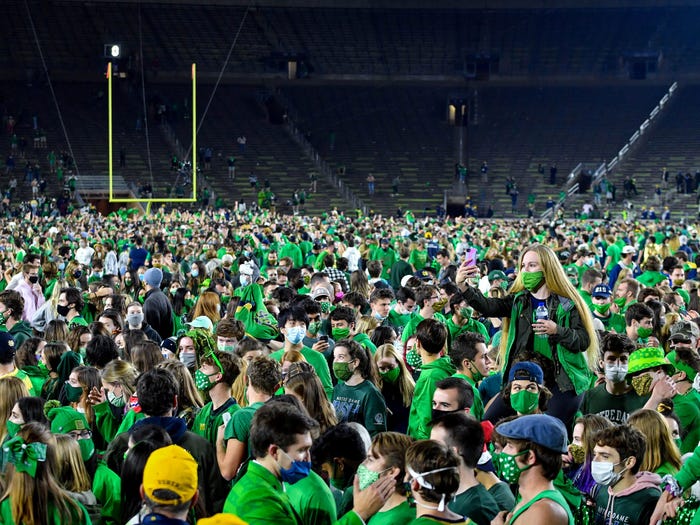 As is customary after a big win, students stormed the field at Notre Dame Stadium after the Fighting Irish upset the then-No. 1 Clemson Tigers in overtime on Saturday night.

But nothing about 2020, or this college football season, has been customary.

With the risk of contracting and spreading COVID-19 more prevalent than ever — especially in Indiana, where the University of Notre Dame is located — young Fighting Irish fans ignored pandemic safety protocols to celebrate the historic victory, potentially putting themselves and the greater St. Joseph county community at risk.

With all eyes on the school after the students' blatant disregard for social distancing and mask-wearing measures, university President Rev. John I. Jenkins chastised students for their extremely public display of negligence.

"As exciting as last night's victory against Clemson was, it was very disappointing to see evidence of widespread disregard of our health protocols at many gatherings over the weekend," Jenkins wrote in a letter to students sent out on Sunday.

But Jenkins' condemnation of the students' celebrations comes mere weeks after his own behavior may have resulted in him contracting the coronavirus on one of the world's biggest stages. On September 26, Jenkins was one of more than 150 people who attended a ceremony at the White House in honor of Amy Coney Barrett's Supreme Court nomination.

Jenkins announced that he had tested positive for the virus on October 2. Hours later, President Trump announced that he, too, had tested positive. Jenkins' failure to social distance or wear a mask at the event prompted both the Notre Dame student senate and the Notre Dame faculty senate to formally express their disapproval of his behavior, even after he issued an apology for his actions.

"I failed to lead by example at a time when I've asked everyone else in the Notre Dame community to do so," Jenkins wrote. "I especially regret my mistake in light of the sacrifices made on a daily basis by many, particularly our students, in adjusting their lives to observe our health protocols."

One of the ways those adjustments have manifested is in the stands at football games. The university has restricted in-person fan participation at Fighting Irish games to 20% capacity and, according to USA Today, only students, faculty, staff, and players' families are allowed in. Still, with more than 11,000 fans in attendance, Saturday night, and cases surging both locally and across the country, storming the field was undoubtedly a public health risk.

"Approve of the win, but this is concerning," St. Joseph County's deputy health officer, Dr. Mark Fox, tweeted. "At least there are masks and all undergrads were tested this week!"

Notre Dame will finish classes for the fall semester on Thursday, and final exams will take place from November 16 to November 20. Should cases spike on campus after the weekend's celebrations, students' plans to travel home for the holidays could be put on hold.