Pat Bowlen, Influential Owner of the Denver Broncos, Dies at 75

Pat Bowlen, the influential hands-on owner of the Denver Broncos, which won all three of its Super Bowl titles under his long stewardship, died on Thursday night at his home in Englewood, Colo. He was 75.

Mr. Bowlen’s family announced his death in a statement. He received a diagnosis of Alzheimer’s disease in 2006 and had had no role in running the team since 2014.

But in the decades after he bought the Broncos, in 1984, for $70 million, a record at the time, Mr. Bowlen had one of the most successful runs of any team owner in American professional sports. In the first 15 of his 35 years at the helm, the Broncos, who had done far more losing than winning in their first 24 seasons, won seven division titles and five conference titles, and consecutive Super Bowls in 1998 and 1999. The team won its third N.F.L. title in 2016.

Under his ownership, the Broncos continued to sell out every home game — a streak that began in 1970 — even as the team increased the seating capacity in Mile High Stadium by 50 percent. Mr. Bowlen lobbied the local government to pay about 70 percent of the cost of a new stadium, which opened in 2001, and the sellouts have continued.

From the start, Mr. Bowlen was an active owner with a flair that reflected his youth and bravado in a league dominated by multigenerational families and businessmen who bought teams decades after they had made their fortunes.

Just 40 when he purchased the Broncos, Mr. Bowlen walked the sideline before games in a cowboy hat and fur coats, signatures that made him a quasi-celebrity. His lifestyle was considered lavish. He once owned a $170,000 chandelier that had belonged to Mussolini.

His avid athleticism brought him just as much attention. Mr. Bowlen ran the New York City Marathon in just over three hours and competed in the Ironman triathlon in Hawaii.

He claimed to be publicity-shy, but that did not stop him from being active in nearly every aspect of the club, including the riskiest and most visible one — the signing of players. Although he did not have the title of general manager, like the Dallas Cowboys owner Jerry Jones, Mr. Bowlen kept close tabs on team personnel decisions, which opened him up to criticism when players did not do well. 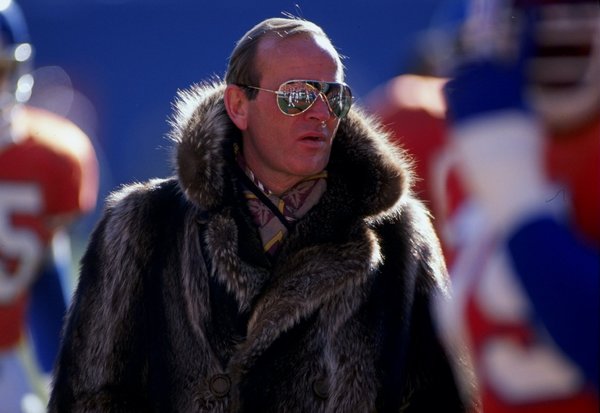 “I didn’t enjoy it,” Mr. Bowlen said of his public profile. “I think I had to put it into perspective, that if you’re going to own a football team, you’ve got to accept this public-image stuff as part of the job.”

He was often seen in the company of players, most notably quarterback John Elway, who played all but one of his 16 seasons under Mr. Bowlen.

But Mr. Bowlen was just as visible among the league’s owners. Considered part of the “new guard” of younger owners, he was dismissive of league executives in New York, whom he once said were “living in the Middle Ages.” He played an outsize role in shaping the league’s financial future, and he understood that the success of the N.F.L. was most closely linked to its television rights contracts.

During his long tenure as chairman of the owners’ broadcast committee, the league expanded its television footprint to include the wildly successful “Sunday Night Football” in 2006. He also encouraged Fox, then a newcomer in broadcast television, to enter the bidding for a package of games on Sundays. The price paid for the league’s television rights rose rapidly, starting in 1994, the year Fox outbid CBS.

Mr. Bowlen also led N.F.L. Enterprises, which includes N.F.L. Films, and sat on the powerful financial, international and compensation committees. The compensation paneldetermines the pay for the commissioner and other top league executives.

Even when he decided to step back from his involvement in making player personnel decisions, Mr. Bowlen appreciated the league’s primary mission.

Patrick Dennis Bowlen was born on Feb. 18, 1944, in Prairie du Chien, Wis. His family had deep roots in Alberta, Canada, where his uncle was a provincial official. Pat was sent to boarding school in Wisconsin, where he was a hockey star in high school and played some football.

He went to the University of Oklahoma. After he failed to make the cut on the freshman football team, he focused on obtaining an undergraduate degree in business and then a law degree.

After graduation, he moved to Calgary to practice law. With the oil industry booming, Mr. Bowlen became president of Regent Drilling, a company his father had founded. He then expanded into real estate and construction, including helping to build Northlands Coliseum, home of the National Hockey League’s Edmonton Oilers, as well as offices and residential projects.

He married Sally Edwards Parker in 1968, and they had two daughters, Aime Bowlen Klemmer and Beth Bowlen Wallace. The marriage ended in divorce in 1973. With his second wife, Annabel Bowlen, whom he married in 1980, he had five more children: Patrick III, Johnny, Brittany, Annabel and Christiana. His wife and children survive him, as do his siblings Mary, John and Bill Bolen.

“Even during his battle with Alzheimer’s, you could still see that same strength and dignity in Pat that he brought to the office every single day for more than 30 years,” the Broncos’ president, Joe Ellis, said in a statement.

In 1981, Mr. Bowlen made an unsuccessful bid for the Montreal Alouettes of the Canadian Football League, and reportedly made offers to buy the San Diego Chargers and the Cowboys.

He landed the Broncos with the help of his three siblings three years later, when he bought 60 percent of the team from Edgar F. Kaiser Jr., who had paid less than half that amount for the team in 1981.

Over time, Mr. Bowlen bought out the minority shareholders who owned the remaining 40 percent, as well as two of his three siblings: Mary and Bill. John Bowlen still holds 25 percent of the team.

For all the stability Mr. Bowlen provided to the Broncos, their future is cloudy. He put the team in a trust with the goal of having one of his children take over. To be considered to succeed him, the three trustees he had appointed established a set of requirements that would first have to be met, including having experience in club operations and an advanced academic degree.

Beth Bowlen Wallace appeared to be the farthest ahead. She went to law school and worked for the team, but in 2015 her position with the Broncos was eliminated. Then, in 2018, Ms. Wallace and Brittany Bowlen, who is nearly 20 years Ms. Wallace’s junior, both declared their interest in running the team.

The dispute deepened when Pat Bowlen’s brother Bill filed a civil claim in state court in Colorado that accused the trustees of self-dealing. Bill and his brother John have publicly supported Beth Bowlen Wallace’s candidacy.

While the ownership tussle is worked out, the team continues to be run by Joe Ellis, the president, and Mr. Elway, the vice president of player personnel. They had been brought in to carry on Mr. Bowlen’s vision.

“I feel like I’ve been anointed,” Mr. Bowlen said in 1999, “and my mission is to save the Broncos and make them the best team in football.”