Perth Glory players are breathing a huge sigh of relief after their Asian Champions League clash in South Korea was postponed.

Glory players, officials and staff were left fearful following an outbreak of the coronavirus ahead of next Wednesday's planned ACL clash at Ulsan Hyundai FC in the country's southeast. 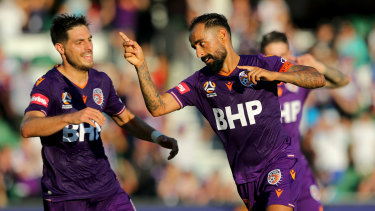 Perth's initial attempts to get the game rescheduled were unsuccessful, with Ulsan demanding the match go ahead behind closed doors.

Glory were considering pulling out of the game, which would have attracted a three-year ban from the ACL and a $50,000 fine.

But sense has finally prevailed, with Ulsan agreeing to reschedule the game for April 7.

That was originally the date that Glory were meant to host their Korean opponents in Perth, with the HBF Park fixture now to be played on March 18.

"The health and safety of our players, staff and supporters was always the club's priority and this decision safeguards that, so we are pleased with the outcome," Glory chief executive Tony Pignata said.

It's been a big few weeks for Glory, who hit the headlines after owner Tony Sage announced he was considering selling the club to a cryptocurrency company.

That deal collapsed in spectacular fashion after it was reported the company was facing lawsuits in London and New York.

Glory will be aiming to extend their A-League unbeaten run to 11 games when they take on the Jets in Newcastle on Saturday.

END_OF_DOCUMENT_TOKEN_TO_BE_REPLACED

LISBON (Reuters) – Portugal’s parliament temporarily suspended electricity, water and gas shutoffs and granted partial pardon to some of its prisoners on Wednesday as the country moved to contain the economic and social damage of the coronavirus outbreak. Until a month after the end of the state of emergency, called

END_OF_DOCUMENT_TOKEN_TO_BE_REPLACED
Recent Posts
We and our partners use cookies on this site to improve our service, perform analytics, personalize advertising, measure advertising performance, and remember website preferences.Ok