Home » Phil Mickelson Moves to the Top of the P.G.A. Championship Leaderboard

Phil Mickelson Moves to the Top of the P.G.A. Championship Leaderboard

KIAWAH ISLAND, S.C. — As Phil Mickelson climbed a hillock to step onto the final green of his second round at the P.G.A. Championship on Friday, a shout from the crowd rose above the growing applause: “You’re not old, Phil.”

Mickelson, who will turn 51 next month, smiled and flashed a thumbs up, his favorite nonverbal acknowledgment across a career dating to the early 1990s. Minutes later, when Mickelson sank a 22-foot birdie putt that put him near the top of the leaderboard just past noon on Friday, he boyishly bounded off the green, offering a thumbs up in every direction.

Eight years after his last major championship victory, Mickelson shot a 69 to finish Friday at five under par, which put him in a tie for first with Louis Oosthuizen at the midpoint of the event. Two windswept days remain on the grueling Ocean Course, but Padraig Harrington, who played in Mickelson’s group in the first two rounds, saw something distinctive in his longtime rival’s deportment.

“He has the bit between his teeth,” Harrington, 49, said, using an expression for a horse that cannot be stopped. “I expect him to contend, to be there at the end of the week, for sure.” 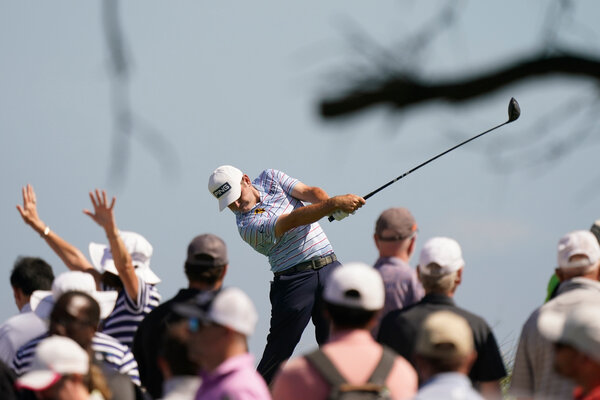 Mickelson has won five major championships, a total that only 13 male golfers have bettered — and just six of them did so after 1964. A victory this weekend would not only improve his standing in the sport’s pantheon, but would also make him the oldest major champion, taking the record from Julius Boros, who was 48 when he won the P.G.A. Championship 53 years ago.

Harrington, who was at even par for the tournament after the second round and still in the title hunt, was asked if he had an appreciation for what Mickelson was trying to do at an age when many golfers have opted for the game’s senior tour.

Harrington, who has always had a way of channeling his inner Irish poet, smiled as he replied, “Unfortunately, as you gain experience, you lose innocence.”

He explained: “There is a sweet spot on the way up when you’re gaining a bit of experience and yet you have that innocence. As you get older, yeah, we have experience, but we have some scar tissue in there.”

The consequence? “We can overthink things,” Harrington said.

For all of Mickelson’s many talents — he got his 44th PGA Tour victory two years ago — he has rarely been able to avoid the ruinous trap of overanalyzing his own game.

Consider the past few weeks, when Mickelson missed the cut at the tour’s Valspar Championship, one of nine tournaments this season in which he has failed to contend for the title.

“As I’ve gotten older, I have a hard time focusing,” Mickelson said afterward. “And that’s my challenge right now. I’m trying all different things to be able to elongate my ability to stay focused, or to refocus.”

After Friday’s round, Mickelson revealed his new plan for sharper concentration.

Mickelson, who is always tinkering, mentioned other tactics.

“I might try to elongate the time that I end up meditating, but I’m trying to use my mind like a muscle and just expand it,” he said.

Mickelson has also done something more customary for a struggling golfer, which is to put a new club in his bag. Off the tee, Mickelson has increasingly relied on an uncommon 2-wood. His brother and caddie, Tim, said the club was similar to one Mickelson had used in his last major championship victory, at the 2013 British Open.

“It basically goes 20 yards short of his driver,” Tim Mickelson said. “It’s like a 12½-, 13-degree, something like that. It basically goes plenty far, but having that smaller head, you just have a touch more confidence that it’s going to go straighter.”

Mickelson started Friday’s round on the back nine, where he fought 20-mile-an-hour winds, as did the rest of the field, and made the turn at two over par. But Mickelson had five birdies for a 31 on his closing nine — and he nearly eagled the par-5 seventh hole.

Twenty minutes after his round was over, the excitement of the moment had not diminished.

“To know I’m playing well heading into the weekend, to be in contention, to have a good opportunity,” Mickelson said. “I’m having a blast.”

Brooks Koepka continued his consistent play Friday with a second-round 71 that left him in third place, one stroke behind Mickelson and Oosthuizen. Three other golfers were tied for fourth and two strokes off the lead: this year’s Masters champion, Hideki Matsuyama; Branden Grace; and Christiaan Bezuidenhout.

Throughout Friday’s round, there was considerable movement on the leaderboard. The first-round leader, Corey Conners, bogeyed five of his first six holes and stumbled to a three-over-par 75. Will Zalatoris, the tour rookie who has ascended to 30th in the world rankings, slumped with a 74 Friday after shooting a one-under 71 in the first round. Jon Rahm, ranked third worldwide, shot a frustrating 75 to fall to three over for the tournament. Justin Rose, another pre-event favorite, matched Rahm’s 75 and was also at three over.

Jordan Spieth shot 75 as well and was at four over at the tournament midpoint. Dustin Johnson, the game’s top-ranked player, continued the uneven play he has consistently exhibited since late February with a 74 that followed a first-round 76.

Rallying from an opening-round 75, Rory McIlory shot 72 and was at three over par. The 2020 champion of the event, Collin Morikawa, fell to one over for the tournament with a 75 on Friday. A trio of players held their positions just below the leaders: Gary Woodland, the 2019 United States Open champion, Kevin Streelman and Sungjae Im each shot rounds of 72, which left them two under for the championship.