From his table at a restaurant on the Promenade des Anglais, Phil Neville stares out at the shimmering waters of the Mediterranean.

It is 10am and he has already been for a five-mile run along the sea front, past the famous pink dome of the Hotel Negresco and the sun-worshippers arranging their towels on the pebble beaches to the sign on the promontory that says ‘I Love Nice’.

In many ways, the man who was appointed England manager 18 months ago is a picture of serenity but his team’s tilt at the Women’s World Cup starts on Sunday evening against Scotland in the Allianz Riviera stadium where the men’s team coached by his brother, Gary, lost to Iceland at Euro 2016. Neville knows the stakes in this tournament are so high the serenity will not last. 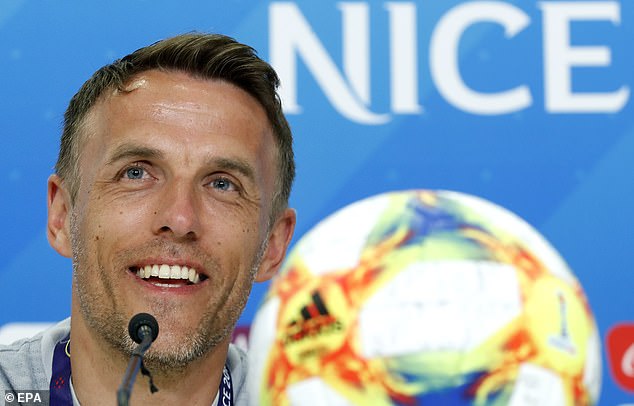 Neville has always been candid about the fact that his side are in France not just to improve on the bronze medal finish they achieved in Canada four years ago but to win the tournament for the first time, and even though England have stuttered in their warm-up games, he has not altered his stance now that the opening match is upon him.

‘For us to win it,’ he says, ‘we’ve got to be at our best and more. That, I’m certain of. We’ll have to do a superhuman effort. The players know that. We’re in it to win it. We’ve had defeats to Canada and New Zealand in the last few months and I think what those defeats told us was that we cannot drop below our best or we will pay the price.’

England need a good performance and result against the Scots to restore confidence and momentum and banish the notions that they peaked too early when they won the SheBelieves Cup ahead of the USA, Japan and Brazil in March, and that they are beginning to wilt under the weight of expectation that has been thrust upon them and which they have encouraged. 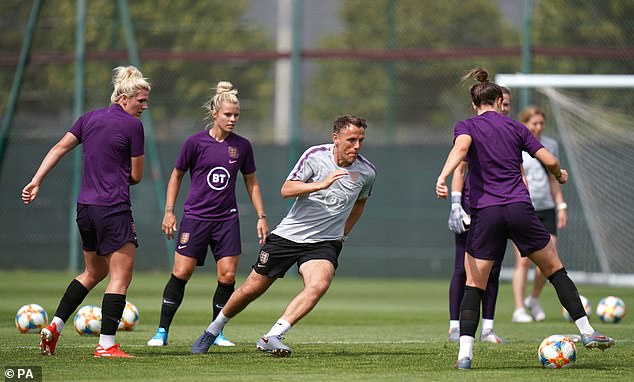 It does not help that the Scots are an infinitely improved side from the team thrashed 6-0 by England in the group stages of the 2017 European Championships and which is hungry for vengeance in the form of an upset.

Those are the habitual challenges of any tournament for any fancied team. At this stage of the evolution of women’s football, though, the pressure is about more than that.

It is not just that the competition for the sport’s biggest prize is fiercer than ever and that other countries as well as England have begun to catch up with the USA, the major powerhouse in the women’s game for the last 20 years and reigning world champions.

Former USA player Julie Foudy said recently she believed any one of France, who opened the tournament on Friday night with a crushing victory over South Korea, Germany, Australia, USA, Japan and England could lift the trophy. 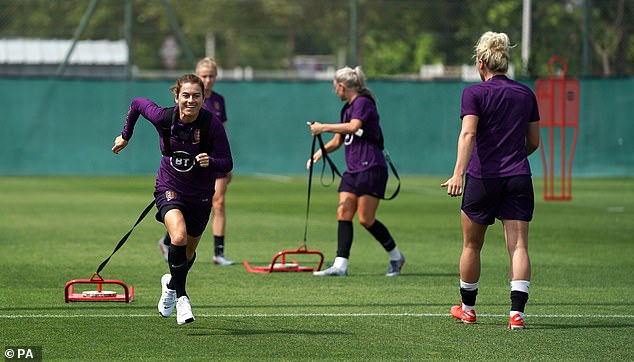 ‘A lot of teams have caught the USA up,’ Neville says. ‘They were the outstanding team but what happens to outstanding teams is people study them. The fact that Lucy Bronze plays in France for Lyon means she has no fear about playing against the best players, My England players who play in America have no fear about playing against American girls. They know they’re only human.’

In a sport suppressed for so long by the footballing authorities and warped attitudes, it is inevitable that every World Cup is couched in terms of an opportunity to quicken the advance of women’s football and inspire a new generation of girls to be emboldened and empowered by the example set by the players.

In the States, where the women’s team that goes into this World Cup as favourites is considerably more successful than its male equivalent — and which draws bigger TV audiences for matches than the men —they are pressing forward with the drive for equality. In March, the US women’s team filed a federal gender-discrimination lawsuit against the US Soccer Federation, which accused the governing body there of merely paying lip service to the idea of gender equality.

Soon afterwards, at an exhibition game in Los Angeles, some celebrity fans sat in the crowd wearing shirts emblazoned with the slogan: ‘Time’s Up, Pay Up.’ 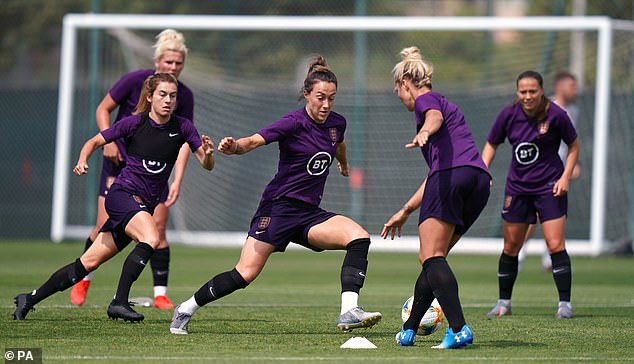 England are strong contenders along with France, Germany, Australia, USA and Japan

Neville nods when he listens to a question about the pressures those wider issues bring to bear on his players and the responsibility they feel when they are told that winning this World Cup would accelerate the change in the way women’s sport is viewed in this country.

‘That’s the biggest pressure that my girls have got,’ Neville says. ‘They’re not just playing a game of football. They are fighting for those that fought for them before: the legends, Kelly Smith, Fara Williams, Casey Stoney. They are also fighting because they have to take this train forward again and keep building on legacies. They want better for the next generation. People keep saying: “You’ve got so much pressure on you to win the World Cup” but the bigger thing for my players is providing a better platform for the next generation.

‘That’s why there’s a real authenticity about the way they speak to the media. They want the next girl, that girl in Newport Pagnell or Milton Keynes, to be inspired by their words, their confidence and their beliefs and that inspires me.

‘If they see a girl at the training ground, they go out of their way to bring that girl into our community. “How are you, how are you doing, are you playing football?” 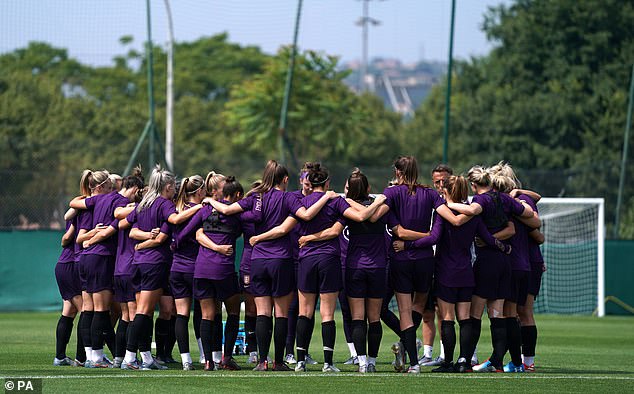 ‘All my players want is respect. Toni Duggan said the other day: “If we play bad, hammer us, if we play good, praise us, just give us the respect, don’t just think it’s all nicey-nicey”. My players kick lumps out of each other in training because they want to win every game and if they don’t play well, they want to be told. That’s the level they want to get to.’

England are winning that respect all the time. They have a team packed with fine players. Bronze, who has just won the Champions League again with Lyon, is the best right back in the world, Steph Houghton, the captain, is a formidable central defender, Nikita Parris, the all-time leading scorer in the Women’s Super League, has been poached by Lyon, Fran Kirby is a clever, creative No 10, Ellen White has just been signed by Manchester City and Duggan’s move to Barcelona saw her reach the Champions League final last season, too.

Neville is introducing a more expansive style and has urged his players to be brave. He does not criticise if they attempt an ambitious pass and it does not come off. What he hates is caution. They showed in the SheBelieves Cup, when they drew with USA and beat Japan comfortably, that they can mix it with the best. They have to rediscover that form on Sunday night.

‘Bravery is one of our five values,’ he says. ‘I only criticise my players if they don’t try to make that pass, if they take the safe option. For the last 16 months we’ve told them about risk-taking, gambling in the final third, being brave. We had the Marines in, and the training they put themselves through when fighting on the front line is so that they can deliver. And I hope my players can deliver.’ 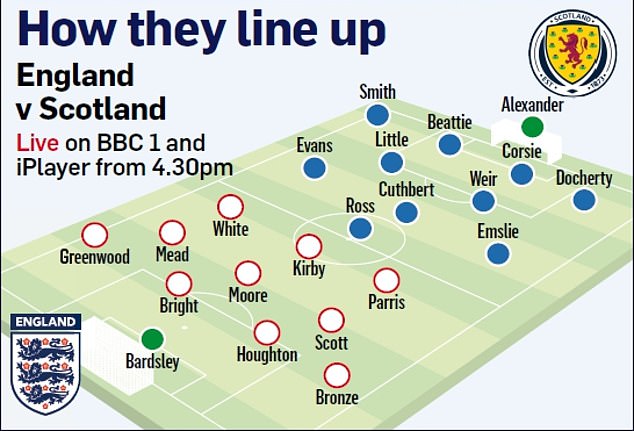 Half a mile down the coast from where Neville is talking, at the hotel where Iceland stayed the night before they knocked England out of the Euros, Scotland midfielder Caroline Weir is smiling about the giant mural depicting her that has appeared in her home town of Dunfermline. ‘It’s on the side of an Indian takeaway,’ Weir says. ‘It is a good takeaway to be fair.’

The Scots are a step behind England in growing used to the trappings of being professionals as it is only six months ago when funding was introduced that meant their squad could go full-time. Maybe that will make them even keener to inflict an upset on an England team touted as one of the tournament favourites. That idea, though, the idea that England might have been softened up by their professionalism and the facilities and salaries they enjoy is roundly rejected by players like White.

‘We know Scotland are determined, aggressive and hungry for it,’ she says, ‘but we are even hungrier. We want it just as much. We want it just as bad. I have my bronze medal literally on my doorframe at home and that makes me want to throw it because I want two better. I want a gold medal.

‘It was an amazing achievement but I’ve moved on and I want something better. I will always have the memories of 2015 but we are making new memories now.’