Home » Roberto Alomar Is Removed From Baseball’s Present, if Not Its Past

Roberto Alomar Is Removed From Baseball’s Present, if Not Its Past

When Roberto Alomar was first eligible for the Hall of Fame, for the 2010 class, he missed by eight votes. He made it the next year with 87 more votes than he needed. It was fairly clear that some voters had decided to make Alomar wait a year as punishment for the worst transgression of his career: spitting on an umpire in 1996.

On Friday, Commissioner Rob Manfred made a decision on Alomar that had no time parameters. After reviewing an investigation into sexual misconduct allegations against the Hall of Fame infielder, Manfred placed him on the ineligible list — not for a year, not for a decade, just “ineligible,” a sentence that amounts to a lifetime lockout of an all-time great.

“At my office’s request, an independent investigation was conducted by an external legal firm to review an allegation of sexual misconduct reported by a baseball industry employee earlier this year involving Mr. Alomar in 2014,” Manfred said in a statement. “Having reviewed all of the available evidence from the now completed investigation, I have concluded that Mr. Alomar violated M.L.B.’s policies, and that termination of his consultant contract and placement on M.L.B.’s Ineligible List are warranted.

“We are grateful for the courage of the individual who came forward. M.L.B. will continue to strive to create environments in which people feel comfortable speaking up without fear of recrimination, retaliation, or exclusion.”

With that, M.L.B. assigned Alomar — who made 12 All-Star teams in a row, from 1990 through 2001 — to its official list of the damned. Alomar enters the “Prison Without Bars,” as Pete Rose called it in the title of his book in 2004, when he finally admitted to the sin that put him there.

Rose was found to have bet on his own team, the Cincinnati Reds, as their manager in the 1980s. Others on the ineligible list include Chris Correa, a former St. Louis Cardinals scouting director who illegally hacked the Houston Astros’ database, and John Coppolella, a former Atlanta Braves general manager who violated international signing rules. 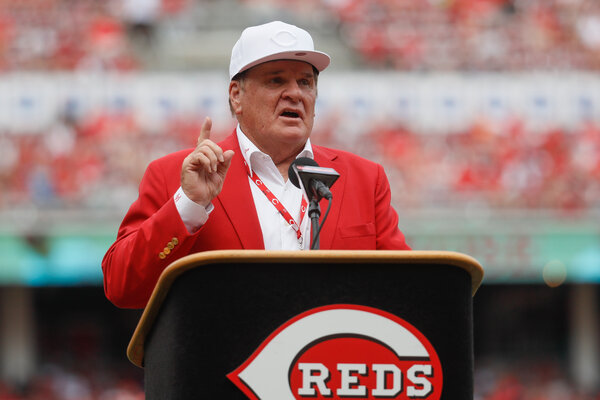 Manfred sentenced them both in 2017, and last year he issued five one-year bans: Alex Cora, A.J. Hinch, Jeff Luhnow and J.T. Watkins were punished after investigations into sign stealing by the Houston Astros and the Boston Red Sox, and Brandon Taubman, a former Houston executive, was cited for hostile behavior toward female reporters in the Astros’ clubhouse.

The league had jurisdiction over Alomar, 53, because it employed him as a consultant. The Toronto Blue Jays, who won their only two championships with Alomar at second base, said in a statement that they were “severing all ties” with him. They added that they would remove Alomar from the team’s Level of Excellence and take down his banner at Rogers Centre.

For his part, Alomar wrote on Twitter that he was “disappointed, surprised, and upset,” but added, “With the current social climate, I understand why Major League Baseball has taken the position they have.”

He offered no admission or denial about the episode that compelled the league to act, but said he hoped that “this allegation can be heard in a venue that will allow me to address the accusation directly.”

Alomar also serves as one of four former players on the Hall of Fame’s 15-person board of directors, with Cal Ripken Jr., Brooks Robinson and Ozzie Smith. A Hall of Fame spokesman said Friday that the board would meet soon to discuss Alomar’s status. But the board also includes Manfred, so it would seem highly unlikely that Alomar would remain.

Jane Forbes Clark, the chairman of the Hall of Fame’s board, said in a statement that she was “shocked and saddened” to learn the news about Alomar, but that his plaque would remain in the gallery.

This is a quirk of timing. Had Alomar been placed on the ineligible list before he was up for election, he could never have appeared on a ballot. In 1991, the year Rose would have made his ballot debut, the Hall’s board passed a rule barring anyone on the ineligible list from being elected to the Hall of Fame.

The Hall’s museum displays items from Rose’s career, and also tells the story of Shoeless Joe Jackson, who was put on the ineligible list with seven other Chicago White Sox in connection with the infamous scheme to throw the 1919 World Series. Artifacts from the so-called steroid era — when chemically enhanced players broke records but lost credibility with voters — are also displayed.

The ongoing display of Alomar’s plaque is consistent with a subtle, sensible addition to the gallery late last year. In December, the Hall added a sign at the entrance reminding guests that “enshrinement reflects the perspective of voters at the time of election.” While the exhibits and library offer more thorough accounts of each member’s life and career, the mission of the institution, the sign added, is to preserve history.

As such, there has been no removal of plaques for executives who upheld the color barrier, like Commissioner Kenesaw Mountain Landis, or players who refused to participate in exhibitions with Black players, like Cap Anson. Landis, Anson and others were deemed worthy of enshrinement in their time, just like Alomar, Kirby Puckett and others whose reputations have been shattered in retirement.

In that context, the Blue Jays’ decision to expunge Alomar’s name from their ballpark seems rash, or at least historically inaccurate; the Buffalo Bills, after all, still display O.J. Simpson’s name beneath their scoreboard, acknowledging his long-ago impact. As awkward as it is now, Alomar will always be a part of the Blue Jays’ past.

And that is where Alomar will remain for the sport: in its history, not its present or, very likely, its future. He cannot set foot on a field without Manfred’s approval. He cannot attend a game unless he buys a ticket. His excommunication is a signal that baseball is finally trying to change a culture too often hostile to women.

“My client commends other baseball industry survivors who have come forward, and who helped her feel safer in sharing her own terrible and life-altering experience,” Lisa Banks of Katz, Marshall & Banks in Washington, who represents Alomar’s accuser, said in a statement.

“My client has no plans to file a lawsuit or take further action. She has not exposed Mr. Alomar’s behavior for notoriety or for money and looks forward to moving on with her life. She simply wants to ensure that Mr. Alomar is held accountable for his wrongdoing and hopes her actions can help Major League Baseball create a safer workplace for its employees.”