Ron Hill, Marathoner Who Set Record in Boston, Dies at 82

Three miles into the 1970 Boston Marathon, Ron Hill felt that he was on pace to break the course record. On that cold, rainy, windswept April day, Hill’s main competitor, Jerome Dayton of Canada, challenged him for a while but faded after 10 miles.

Hill appeared to be in for an easy victory. “On and on he ran,” The New York Times wrote, “as effortlessly as a silvery minnow slicing through the water.”

With 200 yards to go, a race official shouted to Hill that a fast-approaching American runner, Eamon O’Reilly, was trailing him by 26 seconds.

“I never heard of him,” Hill said in an interview with a running website in 2008. “I wasn’t going to let this one go. Fear took over, the adrenaline flowed, and I went on to win, but by only 42 seconds.”

Hill’s time of 2 hours 10 minutes 30 seconds shaved more than three minutes off the course record, set a year earlier by Yoshiaki Unetani of Japan. It was also the first time a runner from England won the Boston Marathon.

As the victor’s laurel wreath was placed on his head, Hill said: “Hot showers? Where are the hot showers?”

Three months later in Edinburgh, Hill confirmed his status as an elite long-distance runner when he posted a winning time of 2:09:28 at the Commonwealth Games marathon. He was only the second runner ever to break the 2:10 mark.

He broke those records all while building a remarkable streak of running at least a mile a day for 52 years and 39 days, the longest of any runner in the world, according to Streak Runners International.

Hill died on May 23 in a hospital in Tameside, England, near Manchester. He was 82. His son Steven said the cause was urosepsis, an infection.

Anyone watching Hill race on the marathon circuit would have noticed that he wore a breathable mesh top and shorts split up the sides to cool him off. In its account of his Boston Marathon victory, The Boston Globe appeared to have misunderstood the rationale behind Hill’s garb, calling the shorts “white satin panties, cut high to the hips.”

A textile chemist, Hill was working for the chemical company Courtaulds when he formed his own company, Ron Hill Sports, in 1970 to design and manufacture synthetic vests, shorts and waterproof jackets for runners. He began to focus full-time on the company (later renamed Ronhill) in 1975 and sold it in 1991 during a recession, though he stayed on for 25 more years or so as an ambassador.

“He was so forward thinking,” Amby Burfoot, the winner of the 1968 Boston Marathon and a former executive editor of Runner’s World, said in a phone interview. “He was playing around with nutrition — carbo-loading — punching holes in his shirts, wearing the lightest pair of shoes you could possibly imagine and even running barefoot when he could.” 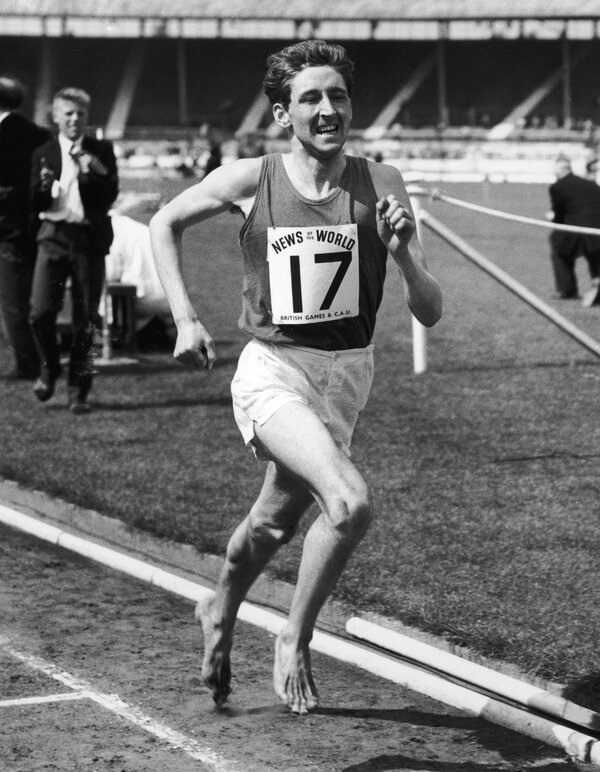 Ronald Hill was born on Sept. 25, 1938, in Accrington, in northwestern England. His father, Allan, was a train driver; his mother, Eva (White) Hill, worked in a bakery and was a homemaker.

As a boy, Ron’s inspiration to run came from the comic strip character Alf Tupper, a welder and runner who trained at night and overcame various obstacles to become a champion. Ron came to love cross-country racing, became captain of his town’s grammar school team and set the record on the school’s course.

He ran at what is now the University of Manchester, where he earned a bachelor’s degree in 1960 and Ph.D. in textile chemistry in 1964. He started working at Courtaulds that year.

His success did not come quickly. His first major international competition was the marathon at the 1962 European Athletics Championships in Belgrade, then the capital of Yugoslavia. He failed to finish. At the 1964 Summer Olympics in Tokyo, he finished 19th in the marathon and 18th in the 10,000-meter race. But the next year, he broke the world records for 25,000 meters and 15 miles that had been held by Emil Zatopek of Czechoslovakia.

Hill was not chosen for the British marathon team for the 1968 Summer Games in Mexico City, but he competed in the 10,000-meter event, finishing seventh. That year he also set two world records at 10 miles.

At the 1969 European Championships in Athens, Hill was tiring in the final miles of the marathon, thinking he might earn a silver medal at best, when he spotted the leader, Gaston Roelants of Belgium. With less than a kilometer left, Hill caught up with him.

“I was not sure what to do,” he said later. “I thought, ‘Should I sit in behind and try to outsprint him or go straight past?’ I chose the latter and never looked back, as I was in fear of him responding.”

Hill won by about 34 seconds.

Seven months later he arrived in Boston as one of the favorites to win.

“Boston was regarded as the classic marathon then, and I had dreamed of it,” Hill told The Globe in 1988. “I could hardly afford to leave work, and Boston didn’t pay expenses. But I wanted to go, and friends chipped into a fund to send me.”

He finished sixth in the 1972 Olympic marathon, which the American Frank Shorter won.

By then he was eight years into his streak — usually at least two-and-a-half miles a day but sometimes less — regardless of bad weather or ill health.

He ran after undergoing bunion surgery, wearing a cast and using crutches. He ran the day after fracturing his sternum in a car accident.

His son recalled that on the day after the accident, his father “swiveled out of bed, removed the sensors monitoring his heart and said, ‘Come on, you’re taking me home.’ One of the doctors informed him that he had to get back into bed, but he point blank refused.”

The streak, the longest ever recorded, ended after 19,032 days in 2017, when he had chest pains while running. He subsequently had a stent placed in a coronary artery.

A year later he was diagnosed with Alzheimer’s disease.

In addition to his son Steven, Mr. Hill is survived by his wife, May (Robinson) Hill, whom he married in 1960; another son, Graham; a granddaughter; and two brothers, Norman and Jeffrey.

Hill competed as an amateur at a time when athletes weren’t paid, though many received payments under the table. Later, the sport would offer big paydays for marathon winners through appearance fees and prize money.

“I did everything I could to be the best in the world,” he told Inside the Games, an international sports website, in 2019. “I couldn’t train full time, couldn’t train at altitude, couldn’t afford backup support. I only ever had two massages in my life — and when I was injured, I just had to run through it.

“I never made any money at it,” he added, “but you can’t take away the gold medals.”