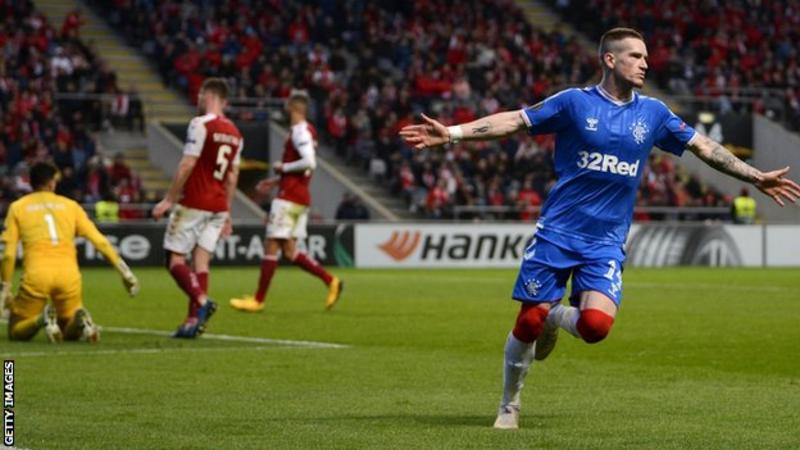 Rangers backed up last week’s stunning comeback by producing a poised performance to dump Braga out of the Europa League and reach the last 16.

Ryan Kent’s calm, breakaway finish coupled with a strong defensive display means the Ibrox side are in the last 16 in European competition for the first time since 2011.

It might have been more comfortable had Ianis Hagi not had a first-half penalty saved and Scott Arfield’s late attempt from close range not been correctly ruled out for offside.

But few would have given Steven Gerrard’s side a hope of progressing against the Europa League’s top scorers, having been 2-0 down after an hour of the home leg.

Kent’s strike, though, ensured a 4-2 aggregate victory and means Rangers can look forward with excitement to Friday’s draw at 12:00 GMT in Nyon.

Rangers should have been out of sight by the interval but had to wait until an hour in before grabbing the goal that ultimately assured their progress.

They had been defending progressively deeper as Braga began to exert pressure, but Hagi’s ball over the top released Kent to race through and fire low past Matheus, in off the far post. It was a counter-attacking masterclass and no more than Rangers deserved, having spurned three glorious first-half chances.

Braga’s high defensive line was ripe to be exploited and Rangers picked a hole in it early on. Kent threaded through for Arfield, who bore down on goal before slipping a pass to Florian Kamberi. The striker looked tentative as he struck it and Matheus was able to beat the shot away.

Kent then had an equally gilt-edged opportunity to put Rangers ahead but he dragged his shot wide of the far post from Hagi’s pull-back.

Braga were enjoying plenty of possession, particularly in the wide areas, and that looked their most likely route to goal. Twice Nuno Sequeira delivered from the left and twice Paulinho went close – the first header tipped over the bar by Allan McGregor.

But then came Rangers’ biggest chance as Raul Silva was penalised for handling Kent’s corner – a decision verified by VAR. Hagi, the hero of the first leg, struck the penalty firmly but Matheus threw up his left arm as he dived to his right and kept his team level on the night.

The huge travelling support may have feared those misses would come back to haunt them but Kent’s strike settled them.

Rangers’ defensive frailties have been exposed domestically this year but they showed a determination and organisation here that have deserted them of late.

Paulinho had one more header, this time off the outside of McGregor’s left-hand post, but Rangers held firm to take their place in the last 16.

Put into the centre of the Rangers defence in place of the beleaguered Nikola Katic, Edmundson was a colossus as he repaid his manager’s faith in him.

The entire back four was solid and the midfield trio of Ryan Jack, Steven Davis and Arfield did a power of closing-down to suffocate Braga’s creative forces.

But Edmundson’s commanding presence alongside Connor Goldson was the bedrock upon which the victory was built.

Attempt saved. Sheyi Ojo (Rangers) left footed shot from outside the box is saved in the centre of the goal. Assisted by Scott Arfield.

Attempt missed. João Novais (Sporting Braga) header from very close range is high and wide to the left. Assisted by Wenderson Galeno with a cross following a corner.

Ricardo Esgaio (Sporting Braga) is shown the yellow card for a bad foul.

Attempt missed. João Novais (Sporting Braga) right footed shot from outside the box misses to the left following a corner.

Attempt missed. Paulinho (Sporting Braga) header from the centre of the box is too high. Assisted by João Novais with a cross following a set piece situation.

Attempt saved. Connor Goldson (Rangers) header from the centre of the box is saved in the bottom left corner. Assisted by James Tavernier with a cross.

James Tavernier (Rangers) wins a free kick in the defensive half.

Florian Kamberi (Rangers) is shown the yellow card for a bad foul.

Fransergio (Sporting Braga) wins a free kick in the defensive half.

Paulinho (Sporting Braga) hits the right post with a header from the centre of the box. Assisted by João Novais with a cross following a corner.

Attempt missed. Trincão (Sporting Braga) left footed shot from outside the box is close, but misses to the right. Assisted by Fransergio with a headed pass.

END_OF_DOCUMENT_TOKEN_TO_BE_REPLACED

TAIPEI (Reuters) – Taiwan on Thursday angrily condemned accusations from the World Health Organization’s (WHO) boss that racist slurs against him had come from the island, saying racism did not exist in Taiwan in an escalation of its bitter quarrel with the body. Taiwan’s exclusion from the WHO, due to

END_OF_DOCUMENT_TOKEN_TO_BE_REPLACED

END_OF_DOCUMENT_TOKEN_TO_BE_REPLACED
Recent Posts
We and our partners use cookies on this site to improve our service, perform analytics, personalize advertising, measure advertising performance, and remember website preferences.Ok