The Thanksgiving game between the Pittsburgh Steelers and the Baltimore Ravens has been rescheduled to Sunday afternoon due to multiple positive COVID-19 tests from the Ravens, the NFL announced Wednesday.

The game, originally set for Thursday night at 8:20 p.m., has yet to get an official time slot or television network.

Many fans will be disappointed that they won't be able to enjoy Thanksgiving dinner while watching one of the fiercest rivalries in sports.

The Steelers are the lone undefeated team in the NFL at 10-0 and defeated the Ravens 28-24 on Nov. 1. After Wednesday's announcement, some of Pittsburgh's players didn't hold back with their disappointment. 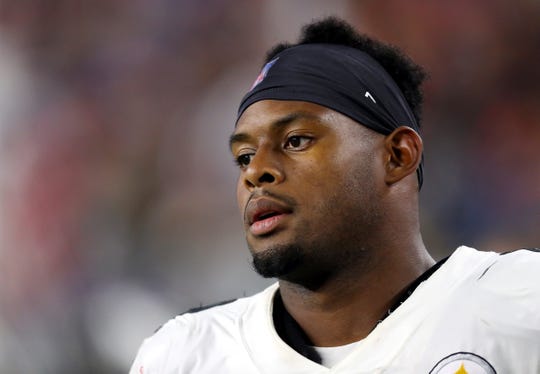 JuJu Smith-Schuster of the Pittsburgh Steelers looks on during the second half against the New England Patriots at Gillette Stadium on September 08, 2019 in Foxborough, Massachusetts. (Photo: Maddie Meyer, Getty Images)

Wide receiver JuJu Smith-Schuster  noted the Steelers had their Week 4 matchup against the Tennessee Titans postponed due COVID-19 positive tests and as a result had their bye moved up, though the team still worked out earlier in the week.

"First the NFL takes away our bye week because another team can't get their Covid situation together, now they take away our Thanksgiving primetime game for the same reason," Smith-Schuster said in a tweet.

First the NFL takes away our bye week because another team can’t get their Covid situation together, now they take away our Thanksgiving primetime game for the same reason. Smh.

Tight end Eric Ebron responded to a Tweet from ESPN reporter Brooke Pryor when she wrote she was about to speak on "SportsCenter" about the game's postponement and the Steelers' reactions.

"To talk about what exactly? How they keep (expletive) us," Ebron said in a Tweet. "We had a Week 4 bye (be)cause of this, now the only time we look forward to some rest was after one of the biggest PRIMETIME games we no longer have. We keep getting screwed this year."

Practice-squad quarterback Devlin Hodges said he was upset about no longer having a long weekend, writing on Twitter that he "was about to shoot a deer and ducks and drink a bunch of @BuschBeer."

Wide receiver Chase Claypool also weighed in, but in not so many words.

The NFL will release a time and TV network for the rescheduled game later Wednesday, the Steelers said in a release.

END_OF_DOCUMENT_TOKEN_TO_BE_REPLACED

END_OF_DOCUMENT_TOKEN_TO_BE_REPLACED
Recent Posts
We and our partners use cookies on this site to improve our service, perform analytics, personalize advertising, measure advertising performance, and remember website preferences.Ok