Home » Sport » The Astros Are Moving On, Even if the Rest of You Aren’t

The Astros Are Moving On, Even if the Rest of You Aren’t

The Houston Astros hear you. Even with no crowds to heckle them from the stands, they know what you think of them. You want them to go away.

Oh, they’ll probably keep talking. That happens to a team that cheats on its way to a World Series title. Baseball fans have long memories, and the Astros may never redeem themselves for stealing signs electronically to help their hitters at home in 2017.

But while their drive to push boundaries disgraced them, it has not led to their demise. After squeezing into the expanded playoffs with a 29-31 record, the Astros reasserted themselves by knocking out the Twins at Target Field, two games to none.

“Guys aren’t afraid of the big stage, and they welcome the big stage,” said Manager Dusty Baker, who took over after A.J. Hinch was suspended and then fired in January. “They told me, ‘Hey, man, we get to the playoffs, you’ll see what we’re really made of.’”

The Astros have been a postseason force since 2015, when the roster constructed by General Manager Jeff Luhnow — who was also suspended and fired in the wake of the cheating scandal — broke through as contenders. All of their recent playoff teams have advanced in the playoffs, and they nearly won a second title last fall before losing to the Washington Nationals in Game 7 of the World Series.

Now they have a spot in a best-of-five division series, starting Monday against the Oakland Athletics or the Chicago White Sox. The setting: Dodger Stadium in Los Angeles, where the Astros finished off the Dodgers in that infamous 2017 World Series. The neutral site will not be so neutral, as the Astros learned in September.

“A few weeks ago, when the team showed up for ‘Sunday Night Baseball,’ I think it was probably a ‘gulp’ type of moment when you see people standing outside the entrance with all the signs as their bus drove by,” said Steve Sparks, the Astros’ radio analyst. “I imagine they’ll experience that again, and that’s tough, especially when you see kids out there doing that, to see that over and over. I don’t think anybody’s feeling sorry for them, but they just get beat down all the time.”

Sparks, who pitched nine years in the majors, called Wednesday’s game remotely, from the broadcast booth at Minute Maid Park. Through the television monitor, he said, he recognized the kind of spirit that disappeared with the scandal.

“As joyous as they’ve played the last few years, we just didn’t see the smiles, and we didn’t see the happiness and the camaraderie that we’ve seen in years past — literally, today was the first time that I saw a lot of smiles,” he said. “They looked a little bit more like themselves. I think they’ve just been carrying a lot of guilt and shame for so long.” 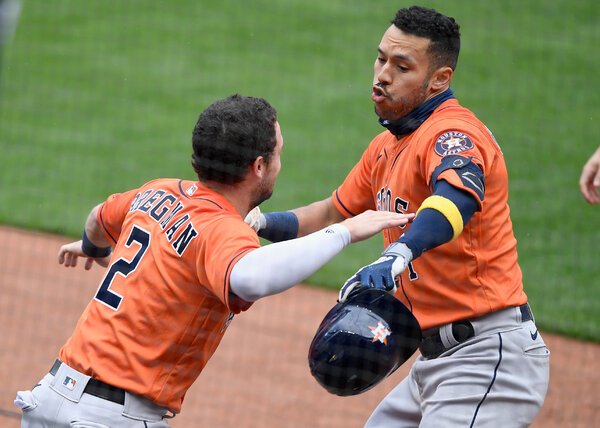 The Astros’ players escaped punishment for the scandal, a condition of their cooperation with Commissioner Rob Manfred’s investigation. The league docked the organization draft picks and levied a $5 million fine on the franchise, but did not vacate the team’s championship.

That would have been a hollow gesture for a sport that almost never scrubs its records. Fans attach their own asterisks to 2017, anyway — and even if the Astros win another title, people could dismiss it as a product of a generous playoff system hastily designed in a pandemic.

Yet it feels familiar to the Astros, who expect to get even stronger.

“There’s a lot of confidence on this team right now — it’s a really good atmosphere, a really good attitude in the clubhouse, and winning just helps reinforce that,” the starter José Urquidy said through an interpreter. “The more we win, the closer it brings us together.”

Urquidy won Game 4 of the World Series as a rookie last October, and pitched well again Wednesday. But he has made only 12 career regular-season starts, and without headliners like Justin Verlander, who needs Tommy John surgery, and Gerrit Cole, who signed with the Yankees, the Astros are leaning heavily on lesser-known pitchers this year.

The left-hander Framber Valdez made his postseason debut on Tuesday, relieving the veteran Zack Greinke after four innings and shutting out the Twins the rest of the way. On Wednesday, the rookie Cristian Javier fired three hitless, scoreless relief innings to earn the win.

After that game, catcher Martin Maldonado said, the pitching coach Brent Strom complimented him for guiding Valdez and Javier through tight spots. Maldonado said he deflected the credit to the pitchers.

“I told him, from the bottom of my heart, the reason why we’re here is because of them,” Maldonado said. “Valdez and Javier, they pitched like they’ve been here 20 years.”

The Astros did not hit well against the Twins, going 13 for 67 (.194), and while several 2017 stalwarts remain — Correa, José Altuve, Alex Bregman, George Springer, Josh Reddick and Yuli Gurriel — the offense is generally mediocre. The Astros averaged 4.65 runs a game this season, matching the major-league average.

But there was also this: Houston’s hitters had the fewest strikeouts in the majors, just as they did in the tainted season of 2017. That year may always haunt the Astros, but in Minnesota, at least, they moved on — in more ways than one.

“It means a lot, honestly,” Correa said. “We’ve had a tough year since the start of spring training, but now it’s all about playing great baseball.”

END_OF_DOCUMENT_TOKEN_TO_BE_REPLACED

END_OF_DOCUMENT_TOKEN_TO_BE_REPLACED
Recent Posts
We and our partners use cookies on this site to improve our service, perform analytics, personalize advertising, measure advertising performance, and remember website preferences.Ok