Home » The Shooting Bishop’s Next Target: His Eighth Olympics

The Shooting Bishop’s Next Target: His Eighth Olympics

VERCELLI, Italy — Sit with Giovanni Pellielo for a while and the stories start to pile up. Stories about his trapshooting triumphs and the asthma that once threatened his life and a faith so deep that he once built a church in his home. Tales of his visit to the Vatican, where the pope reassured him that his devotion to shooting and to his religious beliefs could coexist, and of the time he went to a prison in Sicily and a convicted killer praised his shooting accuracy.

Pellielo tells the stories in an interview in the office of his shooting range, surrounded by photos of him taken around the world, medals around his neck. This summer, Pellielo, who is known as Johnny, hopes he will have a new one, about competing in his eighth Olympic Games at age 51.

Many athletes are inspired by coaches, by parents and even by God. Then there is Pellielo. He says he was inspired, personally, by Pope John Paul II.

They met in Rome 21 years ago. Pellielo had won his first Olympic medal around this time, and he was wrestling with doubts about whether he could balance his faith and his passion. The pope reassured Pellielo, he said, and in the years since he has committed himself to both. 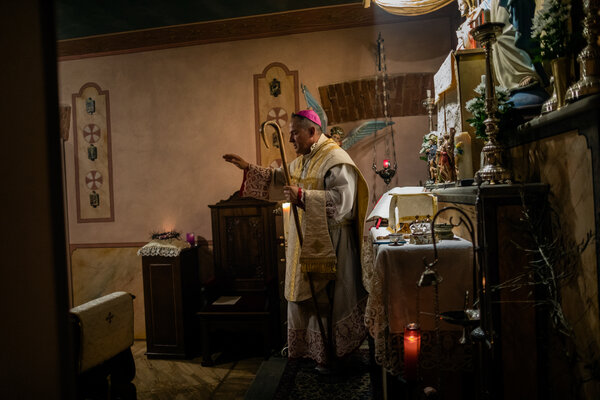 He became an ordained bishop. He celebrates Mass and prays five times a day in the church he built in his home, which sits a short drive from the shooting range that bears his name. It is there that his monastic lifestyle has turned him into one of the most decorated shooters in the world, the winner of four Olympic medals and dozens more in world and European championships.

Over the next few weeks, he will bear down on making yet another Olympic team.

“There are two types of sports persons,” Pellielo said in an interview in Italian in April. “The first type must satisfy their needs: ‘I want the medal. I need the medal.’ I’m not among them.

“The second type is people who love it. I love sport.”

He added, “The fire that burns inside you is love. And love never goes out. And that’s why I’m still here at 51, because I’m continually stimulated by this love, by this fire that never stops.”

Pellielo is among the best competitive shooters in history, and owes some of his longevity to the sport he chose as a boy, which unlike many Olympic disciplines allows longer-than-average careers. Only four other shooters have appeared in eight Olympics, and none has won more than three medals. Considering Italy’s 30 Olympic trap and skeet shooting medals are the most of any country, and the country has 24,000 registered shooters, Pellielo is arguably the top gun of a shooting nation.

Trap shooters are deadly snipers who can shatter a clay disk four inches in diameter as it is flying 75 miles an hour. Accuracy, and consistency, are their trademarks: Pellielo has twice hit a world-record 125 targets in 125 shots in World Cup events.

His Olympic medal collection includes a bronze medal from the Sydney Games and silvers from Athens, Beijing and Rio. In Brazil five years ago, he lost the gold medal in a sudden-death playoff.

“He’s like Maradona,” said CarloAlberto Tolettini, a former competitive shooter and now an executive with Beretta, a leading supplier of shooting rifles. “I’m a little biased because I grew up looking at him like a hero.”

Pellielo’s biggest obstacles came long before he started collecting medals. Asthma threatened his life when he was 3 months old, he said, and dogged him until he was 17. At times, his condition was so severe that his doctor said he couldn’t exercise outside, and to this day, he said, he suffers from double vision.

Barred from most sports as a boy — he wore an oxygen mask until he was 10 — he soon found one that didn’t require cardio: shooting. Pellielo’s parents were rice farmers in Vercelli, a tree-lined town of 46,000 about 50 miles west of Milan that is Europe’s leading rice producer. But his mother and her 11 brothers were also hunters, shooting pheasant and rabbit in Vercelli’s Piedmont region. As a boy, Pellielo often tagged along on their trips.

“I liked it immediately,” he said. “This seemed to me a sports activity that was static. I didn’t have to run. I could stay in one place.”

His parents had divorced when he was 7, and he frequently found himself alone while his mother worked the fields. That comfort with isolation, he said, later became an advantage in competition.

“This solitude helped me grow up in the loneliness on the shooting range,” he said. “You are alone with your headphones. Standing there was natural for me. It was normal. I wasn’t afraid to be alone.”

That year changed his life in other ways. Pellielo had become an active participant in his church when he was 7, serving the local priest during Mass. His interest later grew into a career quest, and he began studying theology at 25. But those religious pursuits clashed with the dedication required to remain an elite international shooter. When Pellielo came to Rome for an audience with Pope John Paul II in 2000, he asked for guidance.

“I told him I had this religious vocation,” said Pellielo, who never married. “But I also showed him I had some difficulties with the institution of the church. For example, someone who does sport has to leave sport to follow his religious vocation. The rules were very strict. So I had to leave the sport and I didn’t feel I wanted to do it. I was talking to the pope about this and the pope told me, ‘Go ahead.’”

Inspired after making a pilgrimage to Lourdes, France, where he said a small Italian boy — or was it a vision of one? — told him to go home and “build your church,” Pellielo transformed a room in the home he shares with his mother into a tiny chapel. It has an altar, a kneeling board for prayers, a large Bible and a collection of statues. In a drawer, he keeps the bishop’s vestments he wears when he or a visiting priest says Mass.

He also spent four years commuting five times a year to Switzerland’s Avers region, where in 2016 he was ordained as a bishop with the independent Holy Celtic Church International. By then he had become a star in shooting, where even his double vision had become an advantage. “My eyes are a bit independent,” he said. “I can take the rifle barrel a little bit higher and with the other eye I can look at the trap in advance.”

His celebrity stretches from the Dolomites to Sicily. During a visit to a prison in Palermo once, he said, a convicted murderer recognized him and told him, “You are a better shooter than me.”

Pellielo will find out next month, after the European championship in Croatia, whether he has been named to Italy’s Olympic team for the eighth time. Since winning his silver medal in Rio, he has added two European mixed team championships and a 10th Italian title to his collection. His top competition for Italy’s lone Olympic spot in men’s trap shooting this year is his Italian teammate Mauro De Filippis, who is ranked No. 1 in the world.

If Pellielo doesn’t make it, he says, he already has another goal.