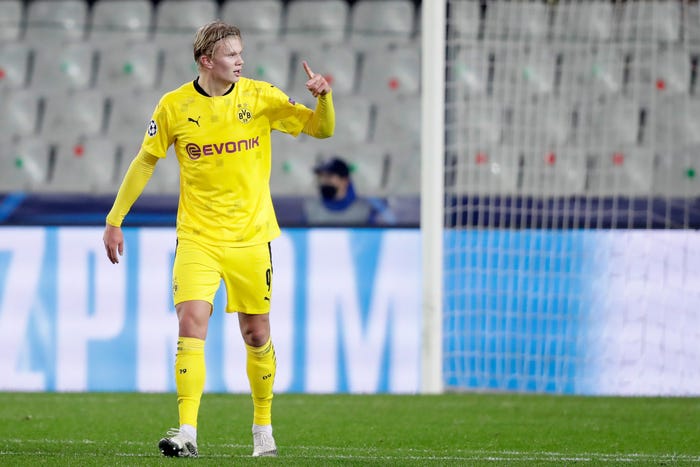 In what was just his 11th Champions League game, the 20-year-old scored twice as Borussia Dortmund swept aside Club Brugge at the Jan Breydel Stadium.

The Norwegian then gave an incredibly awkward interview after the match

Notorious for his short but sweet answers in post-game interviews, Haaland was taken aback by a particularly odd question from a CBS reporter.

"Are you going to sleep lonely tonight?" the reporter asked the striker, referencing comments Haaland made in November 2019, when he said he sleeps alongside his hat-trick match balls which he called his "girlfriends."

The reporter then said: "You're not taking a girlfriend home right now, you didn't score a hat-trick."

"Didn't score, no," Haaland replied, visibly confused, before the the reporter concluded: "That was it, thank you."

The awkward interview also confused pundits Jamie Carragher and Micah Richards, both of whom were captured laughing throughout.

"Oh Jesus Christ," Carragher said. "I thought we were all getting sacked!"

Richards added: "I didn't know where that was going to be honest."

Dortmund next takes on rivals Bayern Munich in the Bundesliga on Saturday November 7.

END_OF_DOCUMENT_TOKEN_TO_BE_REPLACED

END_OF_DOCUMENT_TOKEN_TO_BE_REPLACED
Recent Posts
We and our partners use cookies on this site to improve our service, perform analytics, personalize advertising, measure advertising performance, and remember website preferences.Ok