Home » Sport » Titans kicker Stephen Gostkowski took off his sock in the middle of a nightmare game, then nailed a game-winning field goal

Titans kicker Stephen Gostkowski took off his sock in the middle of a nightmare game, then nailed a game-winning field goal 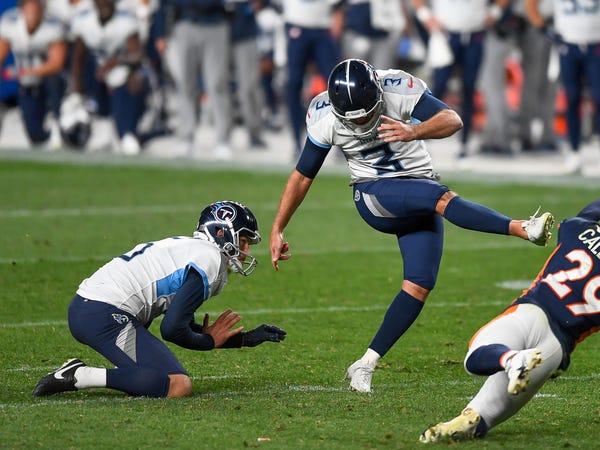 Stephen Gostkowski had the worst game of his life on Monday night, but found redemption in the final seconds of the fourth quarter thanks to making a change to his clothing.

Gostkowski's first regular season game with the Titans was off to a dreadful start.

He missed his first field goal attempt from 47 yards out wide right. Just before halftime, he had a 44-yard attempt blocked by the Broncos, and then followed that up with another miss from 41 yards on the Titans first drive of the second half.

It was the first time in Gostkowski's career that he had missed three field goals in one game.

Through all of Gostkowski's misses, the game remained tied 7-7, but his night truly fell apart when the Titans scored a touchdown to take the lead and he missed the extra point, leaving the Titans up 13-7 and vulnerable to a comeback from the Broncos.

It was as nightmarish a new beginning as Gostkowski could have imagined.

After 14 years in New England, during which he put together a Hall of Fame-worth resume as one of the most reliable kickers in the league, Gostkowski joined the Titans on a one-year deal in the offseason. Tennessee was coming off of a historically bad year from their kickers, making just eight field goals through the entirety of the season.

Gostkowski was supposed to be the answer to those woes, but through his first four kicks with the Titans, had only worsened the problem.

After his missed extra point, Gostkowski was clearly distraught on the sidelines, and was caught by ESPN cameras going barefoot with his kicking foot in an apparent attempt to reset.

But in a storybook ending, Gostkowski got his shot at redemption. After the Broncos took a 14-13 lead with a touchdown of their own, the Titans drove the length of the field in the final minutes of the game and faced a fourth-and-1 from just inside the 10-yard line with 12 seconds remaining.

Gostkowski came out for the most daunting 25-yard chip shot of his career. He sent it home.

Gostkowski kept his sock off for his game-winning kick, a move he said after the game went back to his training in the offseason.

"When I'd been practicing in the summer, I practiced without socks all summer," he told reporters after the game.

"Then I started putting them on. I mean, I would have taken my pants off to make that last kick to try something different. I wasn't doing very well. I had to switch something up, maybe just for mental sake. It's just kind of a weird quirk, I guess."

Gostkowski was disappointed in his disastrous debut for his new team, but also grateful for his teammates for their support through the toughest game of his career.

"I just got here, and I come out here and play like that," Gostkowski said, per ESPN. "For the guys to still support me and still have my back was pretty cool. And that's the cool thing about team sports: You win and lose as a team. Obviously, a position like mine, everybody sees it when you screw up. That's why I was grateful for the opportunity at the end — 'cause the guys deserve to win."

In the end, it all worked out for the Titans — Gostkowski made his kick, and the team got to head back to Tennessee with their first win of the season.

And if Gostkowski runs into trouble in another game later this year, he can always take his sock off.

END_OF_DOCUMENT_TOKEN_TO_BE_REPLACED

END_OF_DOCUMENT_TOKEN_TO_BE_REPLACED
Recent Posts
We and our partners use cookies on this site to improve our service, perform analytics, personalize advertising, measure advertising performance, and remember website preferences.Ok