HORSES appeared to be 'spooked' during the equestrian event at the Tokyo Olympics by a giant SUMO WRESTLER.

No horse in the Olympic jumping qualifier had ever seen anything like obstacle No10. 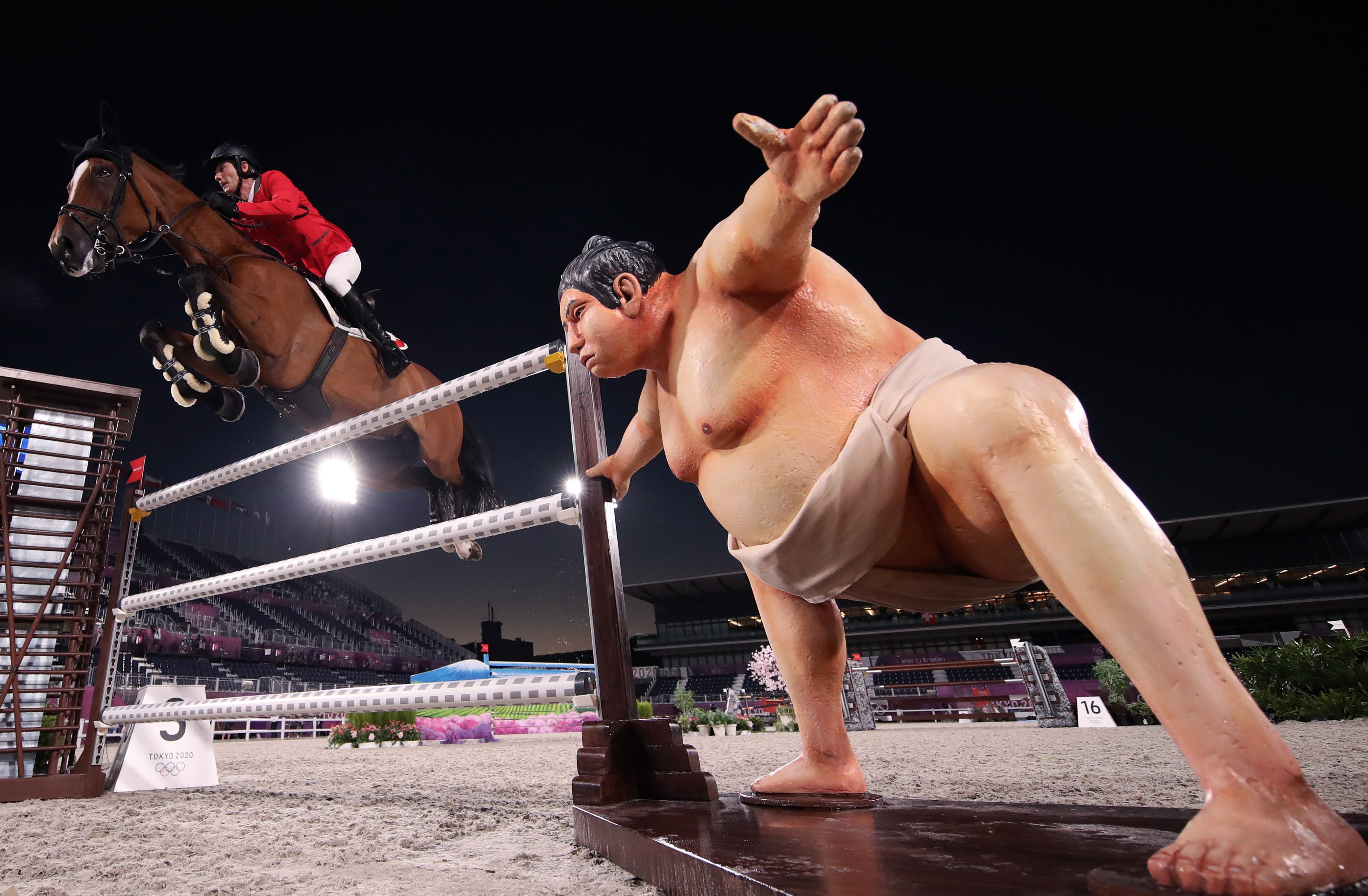 Just to the side of the fence was a ready-to-engage figure of a man in the traditional loincloth-style pants.

British rider Harry Charles said: "As you come around, you see a big guys [bum].

Ireland's Cian O'Connor added: "There's a lot to look at", while Israel's Teddy Vlock described it as 'very realistic'.

But several competitors said the sumo may have distracted a number of horses.

A few pairings pulled up short of the barrier, accumulating enough penalty points to prevent entry into the finals.

Charles said: "I did notice four or five horses really taking a spook to that."

Among the horses alarmed by the setup was France's Penelope Leprevost a team jumping gold medalist in 2016.

She wasn't sure if the wrestler specifically threw off her 12-year-old stallion, Vancouver de Lanlore.

When asked, she replied: "Maybe. We tried to relax our horses in the turn, and maybe they're surprised to see a vertical so close. I don't know."

You know, horses don't want to see a guy, like, looking intense next to a jump, looking like he's ready to fight you.

After seeing others have issues, he and trainer Darragh Kenny of Ireland also a competitor in Tuesday's field made a point of trotting their horses to the 10th jump before beginning their runs so the animals could look it over.

The hope was that familiarity would breed bravery.

Vlock said: "It does look like a person, and that's a little spooky.

"You know, horses don't want to see a guy, like, looking intense next to a jump, looking like he's ready to fight you."

Vlock and Kenny both cleared the obstacle without issue. Kenny finished second with no penalty points and a time of 82.01, while Vlock fell short due to other issues.

Some riders chalked up the troubles to how close the jump was positioned to the turn.

Others blamed the stadium's bright lights that also led to concern at jump No. 1.

Medal hopefuls Scott Brash of Britain and Martin Fuchs of Switzerland believed cherry blossoms positioned on the other side of the jump were the more likely culprit.

🥇 TOKYO OLYMPICS LIVE: All the latest from the Games with our live blog

🥇 WHAT'S ON TODAY? Best bits to watch at the Olympics and UK times for your favourite stars