Home » Sport » U.S. Open: Time Is Becoming Even Less on Phil Mickelson’s Side

U.S. Open: Time Is Becoming Even Less on Phil Mickelson’s Side

PEBBLE BEACH, Calif. — Phil Mickelson has spoken candidly about how he is in a race against time to win the only major title that has eluded him, but the sense of urgency he felt after the second round of his 28th United States Open was palpable. Daylight was receding, and Mickelson, who had bogeyed two of his last four holes, wanted to straighten out the long irons that had gone crooked down the stretch.

At half-past 7 on Friday night, Mickelson was on the range at Pebble Beach, thwacking up a cloud of dirt as he searched for answers in a small bucket of balls.

Mickelson had the rushed mien of a player who is on the clock, and not just because less than 17 hours later he would be back on the course, resuming his dogged pursuit of the title that would represent the crowning achievement of his Hall of Fame career.

On Saturday, Mickelson carded a four-over-par 75 in his last competitive round as a 48-year-old. He played the first 10 holes in one under but the last two in four over to take himself out of contention. The crowd in the grandstand behind the 18th green did not care that he finished with a triple-bogey 8 after finding the water with his driver, a high-risk, high-reward club choice. They gave him an ovation as he walked off at three over, which left him closer to the bottom of the leader board than the top.

“Yeah, people here have been terrific,” Mickelson said, adding: “I’ll come out tomorrow and play as well as I can. But today was the day I needed to go low.”

If he were a captain of industry Mickelson would be at the peak of his powers. But because golf is his vocation, Sunday is a red-letter day. It is his 49th birthday and the final round of what, realistically, seems one of his last, best chances to win this tournament. Pebble Beach is where Mickelson collected five of his regular-tour titles, most recently in February.

But the stakes are elevated this weekend. With a victory, Mickelson would join golf’s haut monde, becoming the sixth man to win the career Grand Slam and the first since Tiger Woods in 2000.

So much of keeping score in golf revolves around riches: tournament purses, first-place checks, endorsement contracts, Nassau bets between friends. By that measure, Mickelson has had an incredibly rich career, with 45 PGA Tour titles, including five majors; more than $90 million in career earnings; and a hearty endorsement portfolio worth tens of millions of dollars more.

No one has won a major at Mickelson’s age. The oldest champion, Nicklaus, was 46 when he won the 1986 Masters. A 59-year-old Tom Watson lost a playoff to Stewart Cink at the British Open in 2009, which gives Mickelson hope that his meter has not run out. If he falls short this weekend, Mickelson will turn his sights to next year’s tournament at Winged Foot, another course he loves, and where he has some unfinished business after making a double bogey on the 72nd hole in 2006 to hand the tournament to Ogilvy.

But for all his thumbs-up optimism, Mickelson is a realist. He knows his opportunities to win this tournament are dwindling. 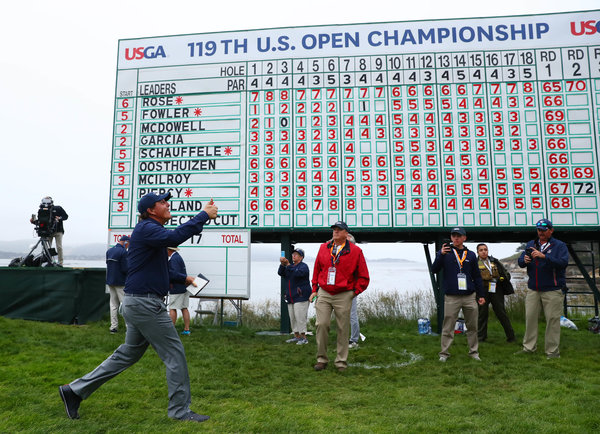 With that in mind, Mickelson added: “I put more pressure on it. That’s the difficult thing.”

Mickelson is an avid student of history and a proud man who yearns to belong to the fraternity whose only members are Bobby Jones, Gene Sarazen, Ben Hogan, Jack Nicklaus and Woods. But in any Sisyphean pursuit, there comes a tipping point where ambition turns into desperation. For Mickelson, that moment arrived during the third round of last year’s tournament at Shinnecock when he took a swipe at his putt while it was still moving on the 13th green, incurring a two-stroke penalty and considerable ill will among his golf purists that have long seen him as their crown prince.

Mickelson has lashed out at the United States Golf Association setups in recent years, but he had nothing but praise for the way it has prepared the course this week. “It’s the best I’ve ever seen,” Mickelson said. “And it’s identifying the best players. It’s making the players the story.”

The 26 players who stood between Mickelson and the lead at Saturday’s start included 12 major champions. One of them was Graeme McDowell, the 2010 champion, who played the first two rounds with Mickelson.

“I kind of feel like it was really inspiring to watch Phil out there at 49 years old on Sunday being as gritty and determined and competitive as I’ve maybe ever seen him,” McDowell said. “That’s really cool to see.”

Mickelson may not have been the leading man at the weekend’s start, but he remains Pebble Beach’s favored son. Whichever way the area’s wicked winds are blowing, Mickelson can count on having the fans’ support as an emotional tailwind.

His gallery on Thursday included Susan Ridder, who, accompanied by her husband, was attending her first golf tournament. She wore a pink T-shirt with “Go Phil” written in glitter across her chest, sandwiched between the words, “Grand Slam.” On the back was a list that included the years that Mickelson won each major. At the bottom was: US Open, 2019.

Ridder said she was rooting for Mickelson because she likes his go-for-broke style. “He makes you think that if he can hit that crazy shot on the course, you can too,” Ridder said.

Those following Mickelson during his first round also included a fan whose cellphone ringtone went off as Mickelson took his putter back for a 2-foot par attempt on his 12th hole, the par-4 third, within range of an AT&T suite. Mickelson flinched at the noise and missed the putt.

He also was distracted on the 15th tee on Friday when someone in his gallery, attempting to get the attention of a friend, whistled during Mickelson’s backswing, leading to an errant shot that set up another bogey.

Mickelson’s gallery during the second round also included a sea gull that tried to take off with his ball on the 10th fairway, after Mickelson had crushed a drive. The sea gull could not quite wrap his beak around the ball. He dropped it farther from the green before losing interest and flying off.

After his Saturday round, Mickelson did not sound like someone ready to abandon his avocation anytime soon. He described Pebble Beach as “a spiritual place” and said, “I can’t help but walk this golf course and feel grateful for all the great things in my life.”