What We Learned From Week 15 of the N.F.L. Season

Favored teams did well in Sunday’s early N.F.L. action, with the A.F.C. South heavyweights both winning, the Miami Dolphins eliminating an old rival from playoff contention and the Tampa Bay Buccaneers starting slowly before racing back for a surprising road win over Atlanta.

Here’s what we learned:

A Derrick Henry stiff arm sounds even scarier than it looks. Henry is known for turning the stiff arm into a work of art, but he took it up a notch in the Tennessee Titans’ laughable 46-25 victory over the Detroit Lions. On a 7-yard run early in the second quarter, Henry was heading toward the left sideline when Alex Myres, a second-year cornerback, tried to wrap up the much larger running back. Henry thrust his right hand at Myres’s head, producing a thundering slap that sent Myres tumbling to the ground.

It was one of numerous highlights for Henry on Sunday, as he rushed for 147 yards and scored his 15th rushing touchdown of the season. Henry is up to a career-high 1,679 yards rushing, putting him 195 ahead of Minnesota’s Dalvin Cook for the N.F.L. lead. Henry could become the first player with consecutive rushing titles since the Hall of Famer LaDainian Tomlinson did it in 2006 and 2007.

Xavien Howard is a takeaway. He has tough competition, but Miami’s Howard should get a great deal of consideration for the N.F.L.’s Defensive Player of the Year Award. Howard, a 27-year-old cornerback, forced a fumble in Miami’s 22-12 victory over New England. The loss eliminated the Patriots from playoff contention. Howard also had a fumble recovery for a touchdown that was called back because another player had stepped out of bounds before touching the ball. With nine interceptions this season, plus Sunday’s forced fumble, Howard has produced a takeaway in 10 of Miami’s 14 games. He is a huge reason the Dolphins have shocked the N.F.L. with a record of 9-5.

Howard’s competition for the award includes Aaron Donald of the Rams — a two-time winner — and T.J. Watt of the Steelers. But Howard’s case would get a huge exclamation point with one more interception, as he would be the first player since 2007 to have 10 in a season. 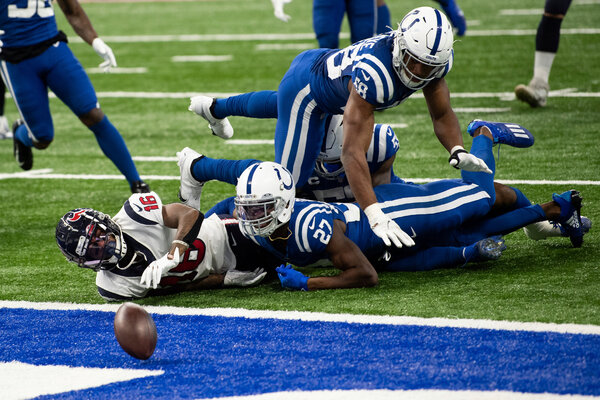 You have to watch until the end of every Texans-Colts game. Even in a down season for Houston, the A.F.C. South rivalry between the Texans and the Indianapolis Colts has provided two extremely memorable games. Two weeks ago, Houston appeared to be on the verge of taking the lead in the final two minutes when a bad snap led to a fumble and allowed Indianapolis to run out the clock. Sunday’s game was just as wild, with the Colts, clinging to a 27-20 lead in the fourth quarter before allowing the Texans to get into the red zone. Texans quarterback Deshaun Watson connected with Keke Coutee, who stretched forward at the Colts’ 2-yard line only to fumble the ball away, handing yet another win to Indianapolis.

The victory allowed the Colts to keep pace with Tennessee in the A.F.C. South. It was the 14th consecutive regular-season game between Indianapolis and Houston that was decided by 9 or fewer points.

Dez Bryant wasn’t done. In Baltimore’s emphatic 40-14 win over Jacksonville, one of Lamar Jackson’s three touchdown passes went to Bryant, a 32-year-old wide receiver whose N.F.L. career appeared to be over several times in the past. It had been 1,106 days since Bryant’s last touchdown, 982 days since he was released by Dallas, 772 days since he tore his Achilles’ tendon in a practice for New Orleans and 12 days since he appeared to announce his season was over on Twitter shortly after being pulled off the field during warm-ups because of a positive test for the coronavirus.

Bryant has just five receptions this season, but that is five more than just about anyone expected him to get.

The Buccaneers can dig out of a hole. Tampa Bay has had a problem with slow starts all season, being outscored by 32 points in first quarters. That sluggishness was taken to an extreme on Sunday when the Buccaneers went into halftime trailing Atlanta, 17-0, having gained just 60 total yards. Tampa Bay proceeded to have its players wake up on both sides of the ball, producing 356 second-half yards and walking away with a 31-27 win on the road thanks to Tom Brady’s go-ahead, 46-yard touchdown pass to Antonio Brown in the fourth quarter. Atlanta had two more chances to regain the lead, but Tampa Bay’s defense locked in, forcing a punt and a turnover on downs.

David Montgomery is on a roll. After six consecutive losses appeared to sink Chicago’s promising season, the Bears have pulled off consecutive wins, with Montgomery, a second-year running back, a big part of the resurgence. He rushed for a career-high 146 yards in Chicago’s 33-27 win over the Minnesota Vikings, scoring a pair of touchdowns. Montgomery has had more than 100 yards in three of the Bears’ four games since a Week 11 bye.

The Bears’ win was crucial because the division-rival Vikings are one of Chicago’s chief competitors for the N.F.C.’s final wild-card spot.

END_OF_DOCUMENT_TOKEN_TO_BE_REPLACED

END_OF_DOCUMENT_TOKEN_TO_BE_REPLACED
Recent Posts
We and our partners use cookies on this site to improve our service, perform analytics, personalize advertising, measure advertising performance, and remember website preferences.Ok