Where are they now? Key members of the 1999 U.S. women’s winning team

PARIS – It has been 20 years since “the '99ers” won the World Cup title, a watershed moment for women’s sports. A look at where key members of the 1999 U.S. women's soccer team are now:

Michelle Akers — Operates a rescue program for abused and neglected horses, Michelle Akers Horse Rescue and Outreach, and a soccer training facility, Circle 10 Soccer Complex, on an 8-acre farm outside of Atlanta.

Brandi Chastain — Co-founder of the Bay Area Women’s Sports Initiative, which pairs female athletes with children with disabilities and girls and women in under-served communities to promote physical health and well-being. Works as a coach and mentor for Allstate’s All-Americans, and does motivational appearances. Has pledged to donate her brain to the Concussion Legacy Foundation for research into repetitive head trauma in athletes.

Mia Hamm — Her Mia Hamm Foundation raises funds and awareness for bone marrow and cord blood transplants in honor of her late brother, Garrett, who died in 1997 of aplastic anemia. Co-owner of Major League Soccer’s LAFC, and a member of the board of directors for AS Roma of Italy’s Serie A. 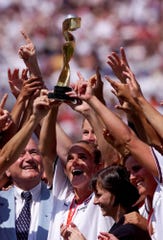 Tiffeny Milbrett — Director of coach and player development for the Tampa Bay United Rowdies, the developmental program for the USL team.

WHAT BRA? What ever happened to Chastain's famous sports bra from 1999?

20 YEARS AGO: How US women's soccer team changed the game

Carla Overbeck — Assistant women’s soccer coach at Duke. The Blue Devils’ staff was named United Soccer Coaches National Staff of the Year in 2017 after leading Duke to the ACC title and a No. 1 seed in the NCAA tournament.

Cindy Parlow Cone — Elected vice president of U.S. Soccer in February to fill the vacancy left by Carlos Cordeiro, who became the federation’s president in 2018. Was the inaugural coach of the Portland Thorns, leading the team to the first-ever NWSL title in 2013. Has pledged to donate her brain for research into the effects of repetitive head trauma in athletes.

Briana Scurry — Public speaker. Forced to retire in 2010 after a concussion, she now advocates for more awareness of and protection against head trauma in athletes.

Kate Sobrero Markgraf — Soccer analyst for NBC and ESPN. Has master’s degrees in educational and psychology and kinesiology, and is now a career counselor at Cardinal Stritch University in Milwaukee.