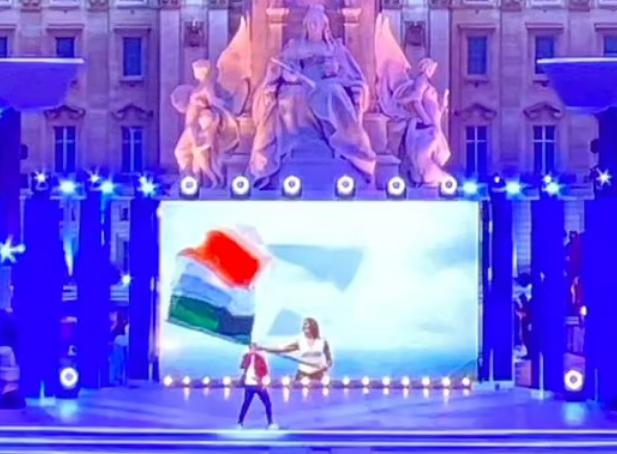 The BBC has apologised after broadcasting an Irish tricolour flag during the Queen’s Jubilee concert at Buckingham Palace.

On Saturday, the corporation aired the incorrect flag to represent Northern Ireland during a segment where comedian Doc Brown spoke of being ‘proud to be British’.

During the montage, the screen showed the England and Wales football badge, a Scottish flag, and then the tricolour flag.

These appeared as Doc referred to Wales, Scotland and Northern Ireland by speaking of ‘the red dragon, shamrock and thistle’.

Of course, the tricolour flag is actually used to represent the Republic of Ireland which became independent from the UK in 1922.

The only official flag in Northern Ireland is the Union Flag of the United Kingdom.

Viewers were unimpressed by the error and were quick to call it out online.

‘How can the BBC not know the flag of Northern Ireland,’ fumed one. ‘Sums up the organisation.’

Echoing a similar sentiment, another penned: ‘A pretty huge mistake for the BBC to fob off as a minor incident… given the history between our 2 nations it’s an absolute horrendous insult to Ireland.’

‘NI is such an after thought they couldn’t be ar*ed to find out what flag to use. That’s embarrassing,’ a third said.

Dust off your Union Jack bunting, Queen Elizabeth II’s Platinum Jubilee is well and truly upon us.

Taking place from Thursday, June 2, to Sunday, June 5, the celebrations mark Her Majesty’s record-breaking 70th year on the throne.

Across the UK, there will be street parties, concerts, and other special events attended by the Queen and senior members of the Royal Family.

Visit Metro.co.uk’s Platinum Jubilee page for all the latest updates.