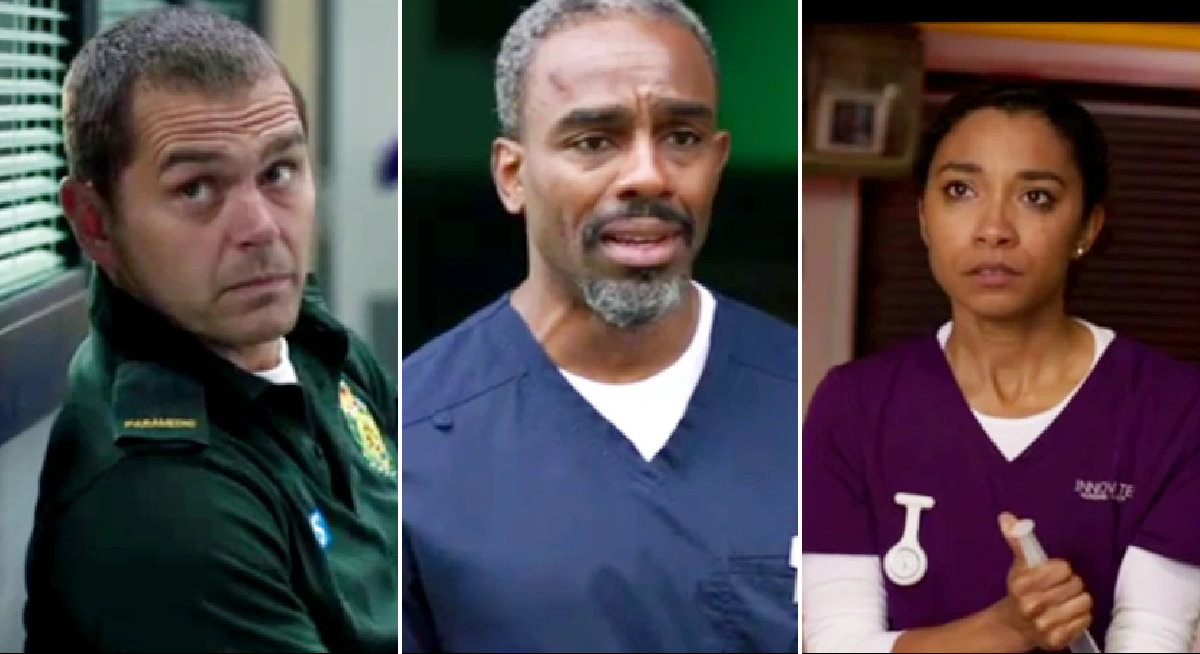 When Jan (Di Botcher) promised new paramedic Sah Brockner (Arin Smethurst) an easy day at the beginning of tonight’s Casualty, seasoned viewers will have had a quiet chuckle. There are no easy shifts on Casualty, and a new staff member will generally have such a baptism of fire it’s a wonder that anyone ever turns up for a second shift.

At first Sah had nothing more to worry about than colleague Teddy (Milo Clarke), who’s hardly been working at Holby for five minutes himself. Teddy was trying to be welcoming, but couldn’t help acting a bit superior in front of Sah, taking over when they were handing a patient over to Dylan (William Beck) in the ED and generally being a bit clumsily patronising.

Sah seems to be a street-wise, no nonsense kind of person and they took Teddy’s efforts at face value because there was a lot more going on – like a patient, Ren, who initially gave a false name and at one point wandered off only to collapse in the car park. Sah dealt with all this efficiently and with sensitivity and they look like they’re going to be a brilliant addition to the team.

As first days go, it must have been a memorable one, ending as it did with Tina Mollett (Adele James) trapping a dangerously ill Ren in the back of an ambulance, holding her hostage while trying to get Jacob (Charles Venn) to pledge his undying love to her.

Tina had also popped a cannula into her own arm and was threatening to pump herself full of something unpleasant if Jacob didn’t see things her way.

Tina had come back to the ED as an agency nurse, in a last-ditch effort to get Jacob to speak to her. As far as the rest of the staff team were concerned, Jacob and Tina were still engaged and they were pleased to see her. It didn’t take long for Tina’s perky facade to crumble, and she started accusing Jacob of picking on her and undermining her.

When Iain (Michael Stevenson) heard that Tina had taken Ren out of resus, he knew something bad was happening and had to tell his colleagues about what had been going on between Tina and Jacob so they knew the situation was urgent. It was Iain who found them in the ambulance station.

Tina had told Jacob she was pregnant, but in dramatic scenes she grew ever more desperate. Eventually Jacob and Ren’s father persuaded her to let Ren go, as Tina didn’t really want to hurt her – she just wanted Jacob’s attention.

Tina was still threatening to hurt herself with the syringe of drugs. As ever, Jacob tried to placate her and talk her down, but Iain had heard enough. ‘Have you done manipulating him?’ he said. ‘Suicide’s not a game, Tina.’

He said he didn’t even believe she was pregnant (he was right about that), and didn’t believe she really meant to hurt herself. As the police arrived, Tina lashed out at Iain with a metal mop handle and he fell to the ground.

The new series begins Saturday 8.45pm on BBC One. pic.twitter.com/ssSalGwZkI

So Tina was arrested, Iain luckily wasn’t badly hurt, and the ED staff attempted to rally around Jacob – who was furious when he heard that Iain had told them all about Tina. She’s made him believe that it’s all his fault, and even after tonight’s shocking events he still thinks, ‘it’s my fault for not protecting her.’

But is Tina finally out of his life for good?

Sue Haasler is the author of five novels and the official BBC Holby City book, which you can read about here.