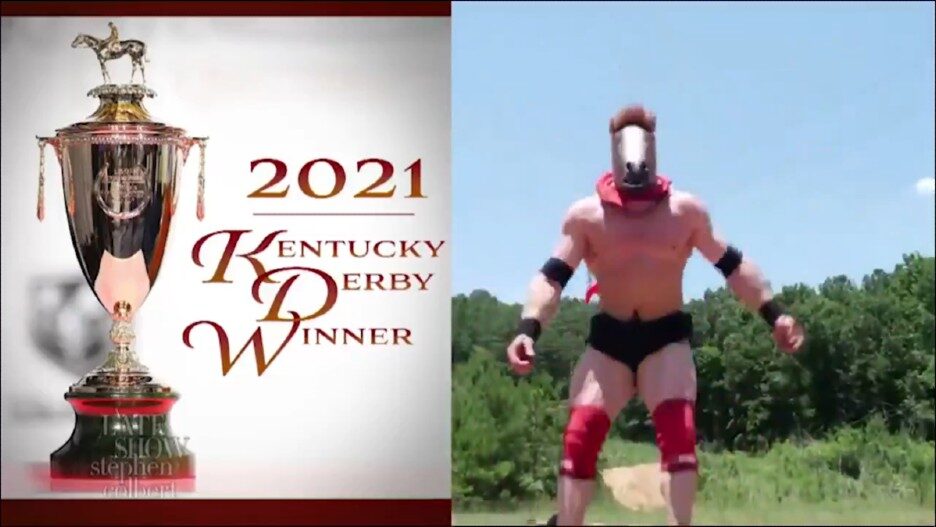 On Monday’s “The Late Show,” Stephen Colbert kicked off his return after a week off with a fun sketch about the Kentucky Derby doping scandal — and well, let’s just say in the Colbert version of current events that horse definitely, definitely juiced up.

So for those of you who don’t get dressed up in your Sunday finery to watch horses run for the entertainment of gambling addicts, what happened is that Medina Spirit, the horse that won the Kentucky Derby, failed a postrace drug test after testing positive for banned performance enhancing substances. An investigation is ongoing and pending the results, Medina Spirit could become only the third horse in Kentucky Derby history to be disqualified and stripped of the title and winnings.

The horse’s trainer, Bob Baffert, has seen 5 of his horses fail such tests. Weirdly, he’s reacted to the latest violation the way a lot of people over the last few years have attempted to evade scrutiny or accountability — by claiming he is somehow a victim of “cancel culture.” Weird.

Anyway, “The Late Show” kicked off Monday with a fake news cast claiming to be the first interview with Medina Spirit since the scandal broke. And basically, the gist is that Medina is quite obviously a roided up rage addict who definitely used performance enhancing drugs. Also, the incredibly muscular actor in the video is wearing an ill fitting horse mask, a hilarious combination as it turns out.

Watch the clip below: