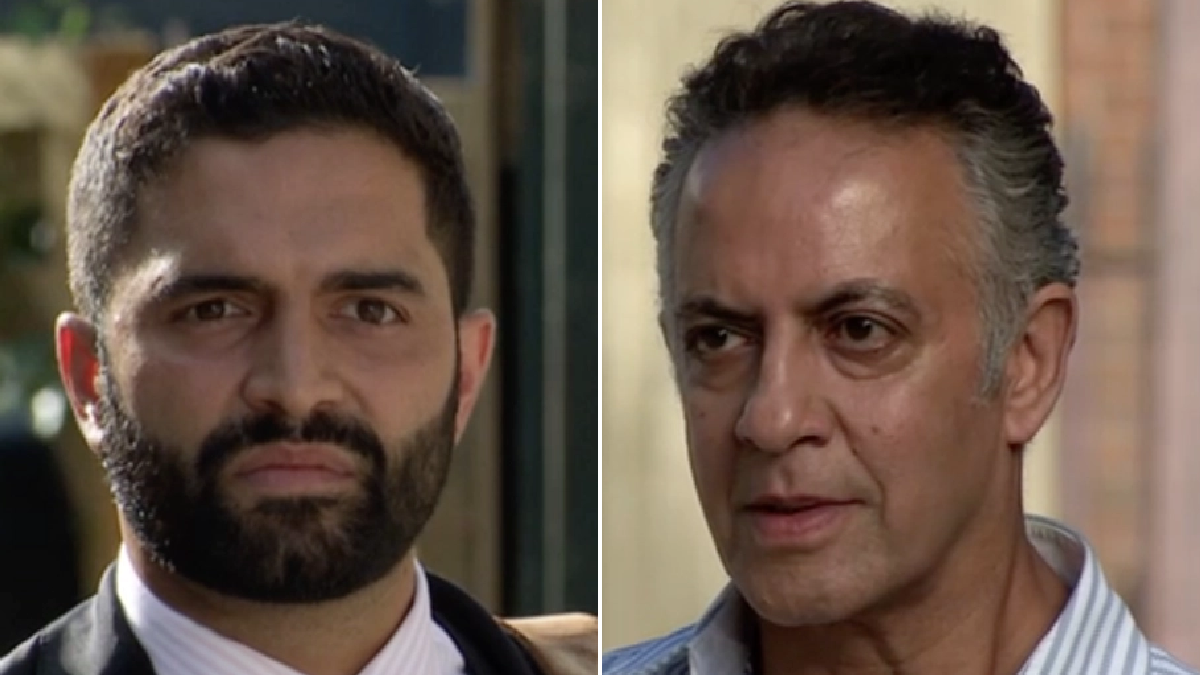 Imran Habeeb (Charlie de Melo) received a telling off from Dev Alahan (Jimmi Harkishin) in Coronation Street, after he implied Asha (Tanisha Gorey) might have been to blame for Seb Franklin’s (Harry Visinoni) demise.

The cobbles’ resident lawyer vowed to do whatever it takes to prove Kelly Neelan’s (Millie Gibson) innocence, and he certainly took no prisoners, so to speak, as the trial kicked off in Wednesday’s (September 1) double-bill.

Nina Lucas’ (Mollie Gallagher) new statement, now including her recollection of the events of the attack, were submitted into evidence ahead of proceedings, much to Imran’s delight.

Sabeen (Zora Bishop), however, was not too pleased about this development, and therefore she set out to undermine Nina’s account of the assault when she was given her chance to cross-examine her.

Nina, who re-adopted her goth clothing and make-up, told the court about how she is certain that Corey Brent (Maximus Evans) is to blame for her boyfriend’s demise, but Sabeen questioned the authenticity of her memories, implying that perhaps they’re false.

Using the young woman’s comic drawings as a basis for her argument, Sabeen claimed that Nina has created three different versions of events, and suggested that perhaps she’s simply so desperate to remember what happened, that she created another.

Afterwards, Asha took to the stand, and Imran decided to take advantage of this opportunity when cross-examining her.

The lawyer asked her if it was at all possible if Corey was simply jealous of the bond she shared with Nina, and if he was, could this have motivated him to attack Nina’s boyfriend Seb?

‘it is possible this has nothing to do with my client,’ he asked, ‘but rather Corey targeted Nina because of you?’

Asha was heartbroken, and Dev was not pleased.

The businessman wasted little time in approaching Imran when he returned to the cobbles, berating him for implying that Asha was to blame for Seb’s death.

‘That’s how you do your job is it?’, said Dev. ‘You tell kids that it’s their fault someone’s died?’

Imran was not in the mood to listen to Dev’s lecture, reminding him that he needed to do whatever it took to prove Kelly’s innocence.

‘I am doing my best here, okay?’, replied Imran. ‘I knew what I had to do to Asha today, and I knew that I had to go hard on her, and I hated every second of it. The difference is, after all of that, Asha gets to go home.’

Dev, not satisfied with his explanation, branded Imran a ‘bully’, and yet Imran remained unfazed.

‘Do you want to see what I can really do?’, added Imran. ‘Come by court tomorrow. Because what I did to Asha today is nothing compared to what I’m going to do to Corey!’

But Imran’s commitment was evident, and if anything, it’s admirable. The question is: will it pay off?

Will he succeed in annihilating Corey like he intends to?

The court case will carry on for quite some time yet, with the jury deliberating over the fates of teens Corey and Kelly next week, before they ultimately reach a verdict.