NBC’s “Debris” has a challenge in the era of streaming. Releasing weekly episodes when most audiences are used to binging is tough, but particularly so when you’re telling a deliberate story about aliens and the answers aren’t particularly forthcoming. How do you keep network audiences coming back and avoid getting frustrated? It’s a question “Debris” will have to reconcile. The first two episodes of the new show were certainly eye-catching, with a cast of players who are more than comfortable doing the heavy lifting. But the sci-fi story, at its heart, is still seeking a way to gain fans for being anything more than weird.

“Debris” definitely stands on the shoulders of legends and if you’ve enjoyed series like “The X-Files” and, especially, creator J.H. Wyman’s previous show, “Fringe,” then odds are this will similarly capture your attention. The series follows Bryan Beneventi (Jonathan Tucker) and Finola Jones (Riann Steele), two operatives for competing international government agencies. They’re investigating a series of mysterious debris falling down to Earth from a spacecraft encountered three weeks ago.

Each episode, so far, blend a mystery of the week with the overarching questions: What is this debris? Was the ship it came off of acting in good faith? And why are shady people out to snag pieces of it? The weekly mysteries, right now, are the most intriguing mainly because of how eerie the imagery has been. The pilot showed us floating bodies while the reanimated body of a dead boy quested for his mother; the second episode started off with all the metal in a Pennsylvania town rolling down the street of its own accord.

Right now the “why” of it all dominates, probably because it’s been a minute since a series like this parceled out episodes, and the fear is that audiences will give up too quickly to learn the answers “Debris” has in store. Then again, if series’ like “The X-Files” and “The Leftovers” taught us anything, it’s that sometimes we don’t need things explained, and that could easily be the case here. If so, it’s good that the cast assembled is a group of all-stars because they’re doing their utmost to keep people coming back week after week.

That “Leftovers” comparison seems apropos considering that, over two episodes, the emphasis has been on the intersection of tragedy and the metaphysical. As the pilot lays out, the debris the characters interact with is bound by one person’s grief. In Episode 2, the issue is with regards to a man and his indecision over pursuing a relationship or securing a life-changing job. On the surface that threatens to be a little saccharine. Why is the debris targeting these individuals specifically? But it opens up further discussions about Finola and Bryan’s background, as well as a question not often examined in sci-fi series: that aliens might be interested in our connection to each other. And if that’s the case, what a lonely existence for those who live beyond the stars. 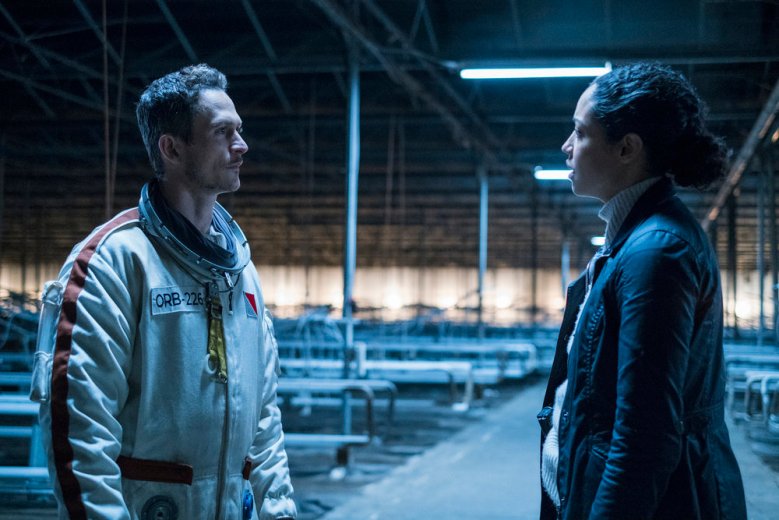 It’s great to see Jonathan Tucker back on NBC and both him and Steele are enough to keep the series engaging. Right now the bare bones of their characters are in evidence. Bryan wears the federal man image like a second skin, but it’s obvious there’s trauma. He has flashes of an emotional past event and hides a picture from Finola, responding with “another time” to questions of who it is. Where Steele’s character is all heart, Tucker’s Bryan is brain, and by that I mean a man desperate to tamp down his emotions or run the risk of losing control. As the first two episodes show, he’s also holding a dark secret about Finola’s life that no doubt will cause tension between them down the road.

Steele possesses a quiet strength as Finola. She’s obviously carrying a lot, losing her dad and dealing with an addict sister who bemoans the lack of time the sisters spend together. Where Bryan keeps his feelings about the debris to himself, Finola is fascinated by it. She sees the magic within it. In the pilot episode, the mixed emotions play out on her face. There’s a sense of wonderment to it, but that same power is terrifying to her. Because her family is broken, Finola hides herself in her work. A call to her sister this past episode is a great showcase of Steele’s talent, showing her love for her sister but holding back from physically making a grand gesture to repair their break.

Compared to other procedural investigative teams the series hasn’t laid out how Bryan and Finola will work together as partners. The last two episodes have seen them together, but it’s obvious as characters they’re still feeling each other out. This most recent episode saw some great moments of levity between the pair, with Bryan talking about the joys of Peeps to Finola’s questioning. Because of what Bryan knows, the conflict between them is building, but hopefully before it explodes we’ll get more moments of fun and connection.

“Debris” is still setting things up but what’s been presented is engaging so far. If it can find a happy medium between the worlds established by “Fringe” and “The X-Files,” and enhance the banter between its leads, it could be something really special.