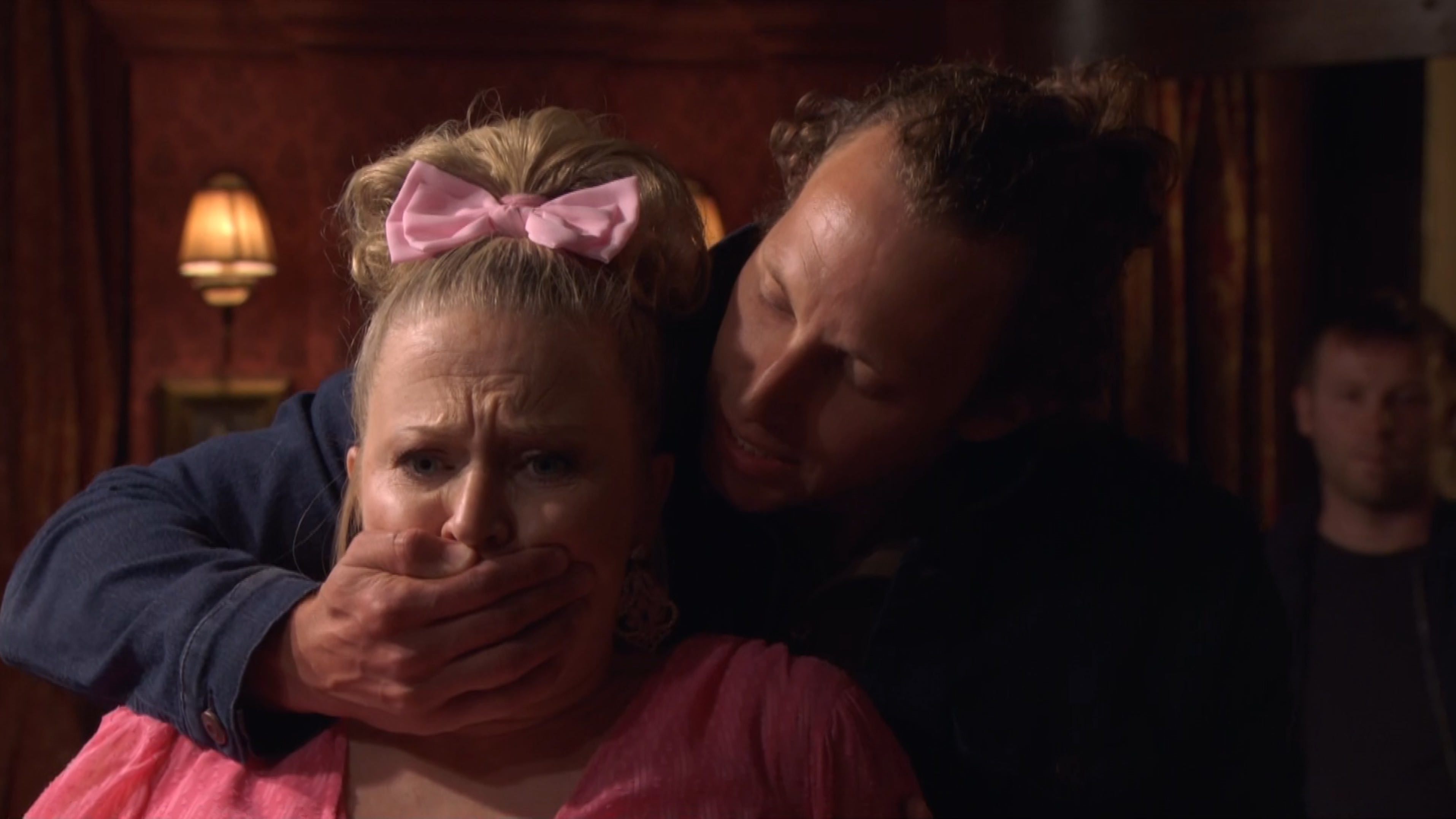 Linda Carter (Kellie Bright) was caught up in a terrifying situation in EastEnders earlier this week, when two men broke into the Queen Vic.

The landlady of the BBC One soap’s iconic boozer was left fearing for her and her unborn baby’s life when she was approached from behind by one of the men, who ordered her to hand over the charity money collected during Whitney Dean’s (Shona McGarty) gig.

Linda, scared, did as she was told, but she soon tried to alert husband Mick (Danny Dyer) about the robbery, as she attempted to make a phone call. But one of the thugs noticed, and grabbed her by the arm.

Zack Hudson (James Farrar), who was secretly spending time with girlfriend Nancy (Maddy Hill) upstairs, heard the commotion unfold and raced downstairs to chase the burglars off, rescuing Linda in the process.

The scenes were tense to say the least, but it wasn’t just the burglary that was a talking point for some, as actress Kellie Bright’s real-life husband Paul Stocker portrayed one of the robbers!

Strict social distancing measures are currently in place at EastEnders, meaning that actors have to maintain a two metre distance at all time.

In certain instances, such as this week’s robbery, actors’ real-life partners have been brought in in order to ‘cheat’ the distance and allow scenes to look as true to life as possible.

Paul, meanwhile, is thought to have stepped in for Jake Wood as Max Branning in numerous kissing scenes last year, during the controversial Max and Linda affair storyline.

The actor previously appeared in two episodes of EastEnders back in 2016, portraying DS Howard South, who interviewed Bobby Beale (Elliot Carrington) in the wake of his arrest.

In the real world, Kellie is pregnant with her and Paul’s third child, revealing earlier this year that she had undergone IVF treatment using an embryo she had frozen.

‘I really struggled getting pregnant with my second child,’ she told OK! Magazine at the time.

‘I was 34 when we naturally conceived Freddy but we couldn’t get pregnant again. We tried for a long time and we got to a point, around the time I was doing Strictly, where we started to investigate IVF.

‘I was 39 by this point and we went for it. It was successful. We managed to get four good, strong embryos. One became Gene, the other three went into the freezer.

‘So this baby inside me now was the last one we had – the last chance of a pregnancy, because at 44 we were not going through IVF again.

‘I believe it was meant to be.’

EastEnders airs Monday, Tuesday, Thursday and Friday on BBC One.