With the fate of his early years of his upcoming presidency hanging on snaring a majority in the Senate out of tomorrow’s duel runoffs in Georgia, Joe Biden ripped Donald Trump today at a rally in Atlanta.

“This administration has gotten off to a God-awful start,” the president-elect passionately told a somewhat socially distanced crowd in the Peach State metropolis of the response to the lethal coronavirus pandemic and the vaccine rollout. “The president spends more time whining and complaining than doing something about the problem,” Biden added as the former Celebrity Apprentice host tried to strongarm Georgia officials to award the state to him over the ex-VP.

The stronger-than-usual language from Biden was not in his prepared remarks. 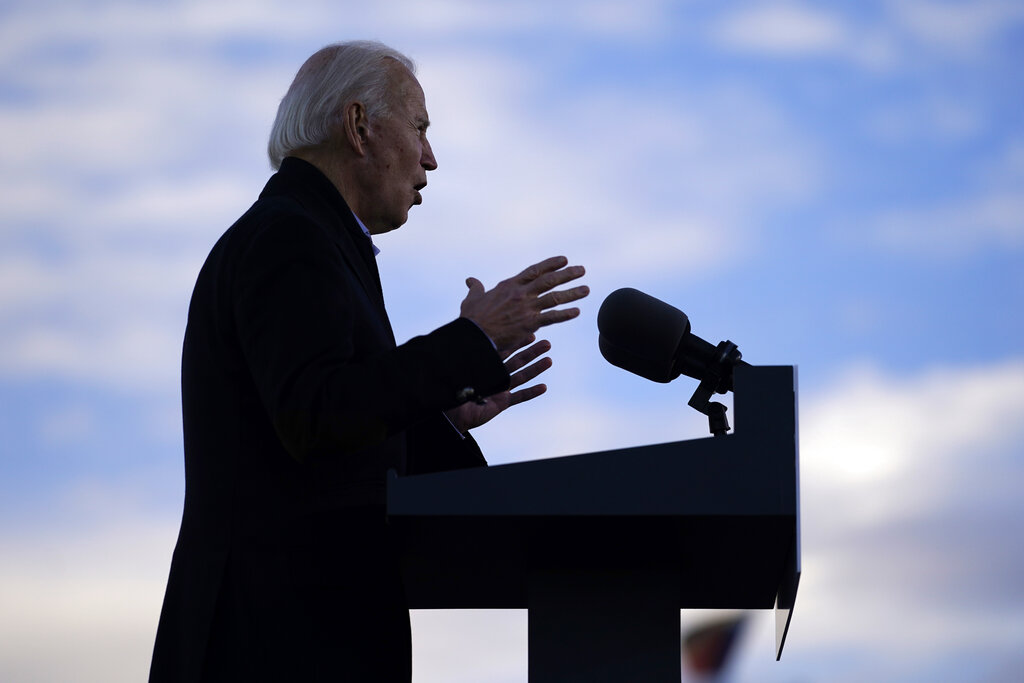 “I don’t know why he still wants the job, he doesn’t want to do the work,” the momentarily off-script Biden went on to say to the drive-in rally, sticking a shiv into Trump and divided Republicans in the most win races.

Covered live by MSNBC and Fox News Channel, the latest visit to the Peach State by the President-elect comes a day after his running mate Kamala Harris was in Savannah for a social distanced rally of her own. The current junior Senator for California was in town to keep momentum going to for contenders Jon Ossoff and the Rev. Raphael Warnock.

With exiting VP Mike Pence also in Georgia this past weekend, the stakes are everything for the incoming administration.

Buoyed by deep pocket Hollywood support, if the duo of Ossoff and Warnock beat incumbents David Perdue and Kelly Loeffler in the very tight races, the Democrats would take over the Senate. Incoming VP Harris would hold the tie-breaking vote in a 50-50 chamber. If the Democrats do not take the seats, the GOP will retain Senate control and likely stymie Biden’s agenda until at least the 2022 Congressional elections.

Just hours before Trump is set to come to Georgia for his own rally, the shade throwing Biden never expressly mentioned the leaked weekend election shakedown call from the loser incumbent to Georgia’s GOP’s secretary of state to “find” enough votes for him to claim victory. Yet, he really couldn’t have done any more damage to Trump, the GOP or Georgia race as this latest overreach has further split the party and further united the often faction strewn Dems.

Additionally, as the January 6 certification of Biden’s 302 electoral college votes win by the Senate looms, 12 Republican Senators have promised to attack American democracy and challenged the certification in a kamikaze measure, Democrats have asked the FBI to open an investigation into the authoritarian phone call.

Despite multiple legal and political wide swings by Team Trump to overturn that result and the electoral college votes that come with it, Biden’s victory held. “We won three times here,” the Democrat joked today with a line he has used repeatedly in the last two months.

Even before Tuesday’s election, over 3 million citizens of Georgia have cast their ballots already in advance voting or by mail. Coming off the record-breaking turnout in November, that 3 million is a new record for any runoff race in the state – which could bode badly for the GOP.

“You have two Senators now who think they don’t work for you, they work for Trump,” Biden told the audience of around 500 parked cars out near Atlanta’s 1996 Olympic stadium. “I was elected seven times to the United States Senate from Delaware. Not once did I take an oath to any President or anyone else. I took an oath to the United States Constitution” he continued to say with bite and throwing in a quote from the philosopher Søren Kierkegaard at one point.

“As president, I don’t believe your United States Senators work for me,” Biden proclaimed. “I believe they work for the people of Georgia.”

“It is time for this nation for God’s sake to finally come together, finally.”

Deadline will have full coverage of the Georgia runoff races tomorrow. Put some coffee on. Polls say it could go either way, so it may be a late one.

END_OF_DOCUMENT_TOKEN_TO_BE_REPLACED

END_OF_DOCUMENT_TOKEN_TO_BE_REPLACED
Recent Posts
We and our partners use cookies on this site to improve our service, perform analytics, personalize advertising, measure advertising performance, and remember website preferences.Ok