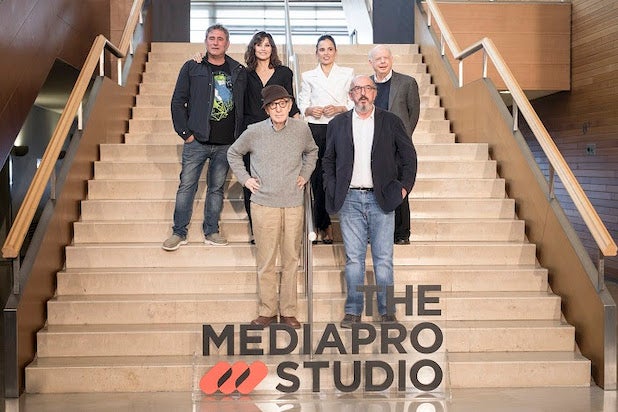 Gina Gershon and other members of the cast of Woody Allen’s new film defended working with the director, calling the opportunity “a dream come true.”

“It’s a beautiful script; a dream come true,” Gershon said in a press conference Tuesday. “These are crazy times; one has to analyze the situation and decide how you feel; I’m delighted to be part of this team.”

Woody Allen is set to begin production on his 51st film in San Sebastian, Spain.

Allen was also on hand for the press conference, and he described “Rifkin’s Festival” as “a romantic comedy about some folks from the United States who arrive at the San Sebastian Film Festival, and what happens has a comical resonance to what takes place here.” He added that the city in the Gipuzkoa region of Spain is like a character in the film.

Allen was asked at the press conference whether he would one day consider retiring.

“I’ve always focused on my work and that absorbs my brain,” he said. “It doesn’t matter what’s happened to my wife, my children and politics. I’ll probably drop dead in the middle of setting up a sequence.”

Like Gershon, Anaya similarly referred to the script as “the most beautiful story” she had ever read and praised working with Allen.

“It’s a day-dream, because Woody is a genius, he’s endearing and a legend; It has been a huge pleasure to be directed by him,” Anaya said.

“He discovered me and there’s a special magic about filming with him once again,” Wallace Shawn, who has collaborated with Allen in the past, said of working with the director. “It’s something very beautiful; because it’s his dream and we walk through that dream.”

Allen describes “Rifkin’s Festival” as a “tribute to cinema” and follows a couple during the San Sebastian film festival in which the woman has an affair with a brilliant French director and the man falls in love with a Spanish woman living in the city.

The MediaPro Studio, an offshoot of the MediaPro Group, will co-produce the film. They previously collaborated with Allen on his globe trotting films “Midnight in Paris,” “You Will Meet a Tall Dark Stranger” and “Vicky Cristina Barcelona.”

Allen’s 50th film “A Rainy Day in New York,” starring Elle Fanning and Timotheé Chalamet, is reportedly being released in several international territories despite being caught in distribution limbo in the U.S. after Amazon nixed its distribution deal with Allen.