Dominic, 50, was meant to be a guest on Good Morning Britain to speak about his latest work with hosts Kate Garraway, 53, and Adil Ray, 46. However, with the news about the 74-year-old President making the headlines, the presenters wanted to get the actor’s take on the matter. However, clearly opposed to Donald Trump’s presidential campaign and work in the White House, the musician was clear in his views and ITV viewers watching at home weren’t best pleased with his comments. 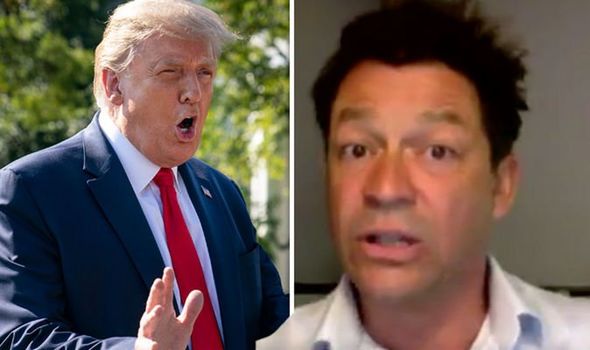 When Kate asked for Dominic’s thoughts on the news, The Wire star didn’t mince his words, admitting he was “jumping for joy” and “not a fan” of the President.

However, his comments sparked uproar among viewers, with one taking to Twitter: “@GMB #GMB Comments from Dominic West referring to Donald Trump – appalling. Shame on you GMB for allowing this interview to continue.

A second person watching at home added on the social media platform: “What a bitter a******e Dominic West is! #GMB.”

Whilst a third commented: “I’m disappointed in Dominic West. Despite what you think of him as a politician, to jump for joy because someone has a virus that could potentially kill him is disgusting! #GMB.”

“Dominic – a little insensitive in tone initially when talking to Kate. #gmb,” a fourth commented, referring to the fact the presenter’s husband is currently fighting the effects of his own coronavirus diagnosis.

END_OF_DOCUMENT_TOKEN_TO_BE_REPLACED

END_OF_DOCUMENT_TOKEN_TO_BE_REPLACED
Recent Posts
We and our partners use cookies on this site to improve our service, perform analytics, personalize advertising, measure advertising performance, and remember website preferences.Ok