Good Omens was released on Amazon Prime last week and eagle-eyed viewers have noticed that the series features a number of Easter eggs paying tribute to the late Terry Pratchett, who co-wrote the book Good Omens is based on with showrunner Neil Gaiman. Gaiman has spoken about how he wrote the Good Omens show for Amazon Prime in tribute to his friend Pratchett. Terry Pratchett also asked Gaiman to write the show before he died in 2015.

How does Good Omens pay tribute to Terry Pratchett?

The first in on the newspaper where Newt Pulsifer (played by Jack Whitehall) reads the job ad posted by Witchfinder Sergeant Shadwell’s (Michael McKean).

Next to this advert is another one that reads: “LOST HAT – Uncle Terry’s in a bookshop near Soho… It is black and has a wide brim.”

This black, wide-brimmed hat was often worn by the fantasy author, so much so that it was given a chair of its own at the world premiere of Good Omens in London.

WHAT HAPPENED AT THE END OF GOOD OMENS?

The personals ad ends with “GO. 28/04”, a reference to Pratchett’s birthday.

On that newspaper, we can also see an ad for a lost book that cuts off at “Colour of M”.

This could read Colour of Magic, a reference to the first of Pratchett’s Discworld novels.

Elsewhere in the series, we see Death (Brian Cox) playing on an arcade game.

WILL THERE BE ANOTHER SERIES OF GOOD OMENS?

On the game’s high score screen, all of the scores are Death’s except for the first spot, which is taken up by a “T. Pratchett”.

Speaking to Express.co.uk at the premiere of the series, Neil Gaiman, who co-wrote the book of Good Omens with Pratchett, said: “It was summer of 2014 and Terry wrote me a letter.

“He’d never asked anything of me before and he wrote and said ‘you have to do this,

“‘I know how busy you are and I know you can’t do it but you have to do it so I can see it before the lights go out’.

WHERE IS GOOD OMENS FILMED AND SET? 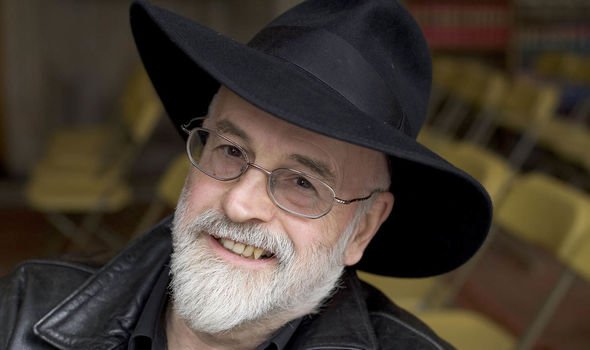 “I said ‘okay’, and then Terry died, which astonished me because I thought we had like six or seven years of him.

“I went back from his funeral and started writing the first episode when I got back to America.

“It didn’t feel funny and I missed him a lot.

“But knowing that I was making it for Terry was what kept me going through everything, no matter how difficult it got, no matter how strange it was, and I think he’d like it.”