Susanna Reid was joined by Bill Turnbull and Good Morning Britain viewers tuned in to see the former BBC journalist impose some changes to the ITV show. With the pair both having presented BBC Breakfast back in 2006, Bill wanted to implement their former employer’s strict timekeeping and at several points throughout the show, Bill mentioned how they were late delivering the news headlines and even cut off an MP in order to not “go over time”.

“It’s just gone seven o’clock – three minutes past actually, still four minutes earlier than the news was last Monday morning, I checked, 07:07 on Monday, 07:08 on Tuesday, ten minutes past seven on Wednesday, that has got to change while I’m here with you.”

“Okay, don’t set your clock by this programme I think is the advice,” Susanna said and Bill remarked: “You will be able to soon.”

“We just get carried away by the interviews – not this morning!” Susanna argued before moving the show along. “Here’s Charlotte with the latest headlines.” 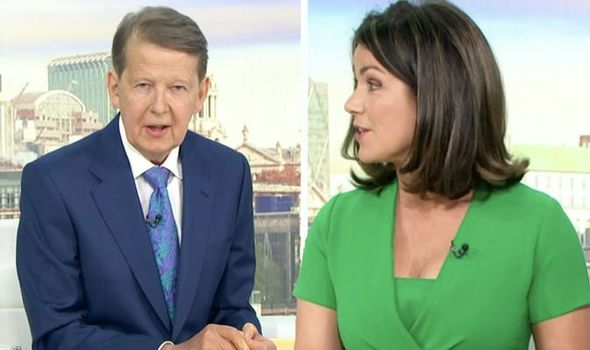 Charlotte Hawkins added: “I best get on with it, thank you very much.”

Later in the show, GMB viewers heard Susanna say: “It’s like being back at the BBC – or maybe it shouldn’t be!”

“Don’t go there, literally,” Bill laughed and she continued: “[It’s a] controversial subject this morning. ”

The presenters were then joined by the Energy Minister Anne-Marie Trevelyan via live video link to discuss whether herd immunity was ever part of Boris Johnson’s Covid policy after former government advisor Dominic Cummings claimed in a series of tweets, herd immunity was part of the government’s Covid plan.

“We’re past eight o’clock and it’s four minutes past eight,” Bill commented but Susanna jumped in: “No! I don’t want to leave it there.”

“We’re going over time,” Bill remarked and his co-star joked: “Bill is very agitated with me.”

“Back at the BBC, we had to stay on time,” he explained but Susanna wanted to ask the MP her opinion on whether there should be “sanctions against the BBC” for Martin Bashir’s conduct in his iconic interview with Princess Diana.

After wrapping up the conversation, Bill joked: “For a moment I thought I would storm out of the studio,” referencing Piers Morgan’s famous exit but no one commented: “Oh, embarrassed silence.”