Inside No. 9's Steve Pemberton 'wants to make nine series and a stage show’ 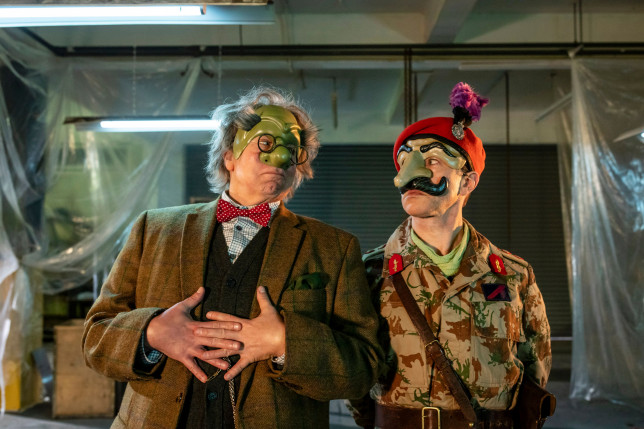 Inside No. 9’s Steve Pemberton has discussed the show’s long-term future, saying that he wants the show to continue for nine series – and also teased the prospect of a stage show.

The BBC show is an anthology of darkly comic twisted tales, with each one taking place behind a door marked ‘number 9’.

One of the most inventive and varied shows on British TV, each 30-minute episode is a self-contained story with new characters and a new setting. Aside from the writers, each episode has a new cast.

Speaking to Metro.co.uk and other gathered press at the The South Bank Sky Arts Awards, Steve – who created the show with Reece Shearsmith – said that they’ve also begun discussing a stage adaptation of the acclaimed programme.

‘I think if we managed to do nine series, that would be pretty incredible – and then we would drop down dead,’ he joked.

Discussing the prospect of a film, the actor and writer added: ‘Who knows? I mean, we’ve talked about doing the stage version of it. It fits the 30 minutes slot very well, so we wouldn’t do anything that would turn people against it. But yeah, we’ll see.’

In the meantime, Steve also confirmed that preparations for series seven are already written and casting is currently taking place.

‘We’ve written all the episodes and will start filming hopefully at the end of August. So we’ve been raring to go. It’s all written and casting is happening as we speak.’

When asked if there was a dream guest star he hoped to sign up for future episodes, the 53-year-old said: ‘I mean, directing Derek Jacobi was incredible. But to be honest, there’s so many you know, we’re blessed with such a great heritage of actors, comic dramatic and everything in between.

‘So, yeah, we never run out of people. That’s why we don’t like recycling.’

Inside No. 9 returned for series six earlier this year, featuring a host of guest stars including Game Of Thrones star Gemma Whelan, Kevin Bishop, Fleabag’s Sian Clifford and Line Of Duty’s Adrian Dunbar.

It comes after an Inside No. 9 producer revealed the one time he thinks show creators Steve and Reece went too far with the show.

Producer Adam Tandy recently brought up the 2020 episode titled Misdirection, which follows a world-famous magician who is extremely protective of his secrets.

‘I think the only time I have seriously thought we might have gone too far was the decapitation in Misdirection in the last series,’ Adam said. ‘In Misdirection, that decapitation with the guillotine felt to me like we could go too far.

‘So it is always a judgment call on the day as to how much gore, how much you can push the idea of offending taste. We have had similar instances where taste has been an issue. But that is probably the goriest moment we have done.’

Inside No. 9 is available to stream on BBC iPlayer.