Home » TV & Movies » It was a blast, but I left Elton John’s orbit long ago

It was a blast, but I left Elton John’s orbit long ago

I remember having to study the lyrics of Your Song, by Elton John and Bernie Taupin, in high school. It was the 1970s and studying lyrics to pop songs was, well, so 1970s.

Look at us staid, fusty, dusty curriculum masters, we’re now studying – studying! – pop song lyrics. We studied James Taylor, too – hummed along, not really knowing what Fire and Rain was all about below the surface. It didn’t matter. 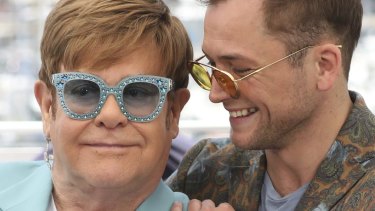 The release of the film Rocketman, about the life of Elton John, will spark memories in a legion of fans, but for me it is also a reminder of the moment I stopped listening to John.

Time conquers many things; it shapes and reshapes your likes, dislikes, what’s core, what’s not, to your life. Time allows you to settle into what you feel comfortable with musically. This doesn’t mean you don’t listen to new artists, but the filter can become narrower, the light has to shine harder and brighter to get through. To use the old currency, it has to compel you to get up and turn the record over to the other side.

Your Song and then Rocket Man took me into John’s galaxy. There was a depth to both melody and lyric that resonated with the young McFadyen. It’s a cliche that you don’t know what you’re looking for until you find it, and it’s especially true with words and music. A bell vibrates, a mighty chord is struck. On the strength of Rocket Man, I bought the album Honky Chateau, on which it appeared. (It was one of the first albums I bought with my own money, to borrow a RocKwiz phrase. The others were Black Sabbath Vol 4 and Tea for the Tillerman. Eclectic if nothing else.)

It wasn’t all love at first or third listen. As I’d come to realise, there are many shades to John – serious, crazy, zany, verbose, grandiloquent, manic, to name a few. It was enough to arouse curiosity and I bought the previous album, Madmen on the Water, and the following Don’t Shoot Me I’m Only the Piano Player and Goodbye Yellow Brick Road.

The latter is a rock masterpiece, and it is the point at which I walked away, never to return. By one road of reasoning I should have stayed for the next release (Caribou, Rock of the Westies, for instance), kept walking the extra mile for the artist. But sometimes the song is no longer your song. While it captures a time and a place, it doesn’t catch where you are now.

Music is the transporter of the soul. Close your eyes and you’re back. It takes a remarkable bond to stay with an artist from go to whoa, to forgive their lemons because they have provided such a bounty. Some Bob Dylan fans for instance see not lemons but merely a different coloured fruit. It’s all one.

As to Elton, sorry, and it’s not the hardest word at all – I left the yellow brick road without regrets. While he was singing, I was no longer listening. I had moved on.

Warwick McFadyen is a regular columnist.