Kate Garraway asked to ‘forgive’ Oliver Dowden after GMB blunder ‘One of those mornings!’

Kate Garraway and Charlotte Hawkins welcomed Culture Secretary Oliver Dowden onto Good Morning Britain to discuss the ongoing row over the safety of the AstraZeneca vaccine and the European Union. However, Garraway scolded the Tory MP when he incorrectly referred to GMB as GMTV during the interview on the ITV show.

On the AstraZeneca vaccine, Dowden said: “First of all it’s very important what we’ve heard, not just from the European Union Medicines Regulator but our own regulator.

“This vaccine is safe, you can have confidence in it, it’s good for you, it stops you getting the terrible disease and it’s good for the whole country because it helps stop the spread of the disease.

“The number one thing that people should look at if they have hesitancy is look at the reliable news sources.

“Go to the BBC, the GMTV, see what they’re saying about it. Go to Gov.uk if you have concerns, you’ll see that they’re being addressed.

Read more: Susanna Reid skewers Brussels in vaccine row ‘The EU has made a mess!’ 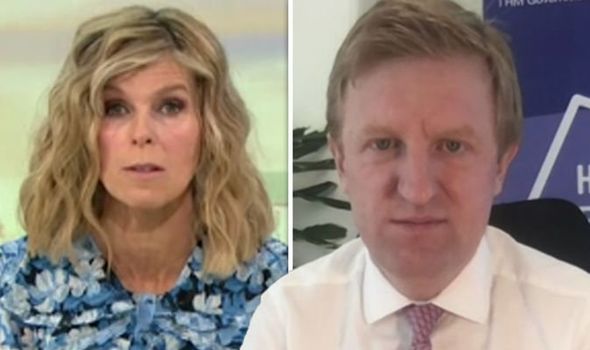 “The vast majority of people as the Chief Medical Officer said yesterday are still turning up taking their vaccine and they should take further confidence from the analysis that’s been taken,” he added.

“It’s one of those mornings where the fire alarm has gone off and everything else so forgive me,” Dowden replied.

“That’s right we’ve been around a long time that’s fine and will hopefully always will be,” Garraway said.

“So look what about supply because that’s the next concern isn’t it? The Government’s there, Boris was very bullish, ‘Our road to freedom is going to go ahead, we have the supplies.’

“However, the problem with these supplies the Government didn’t foresee, did they?

“They were promising that under 50s would be get their vaccine earlier or certainly they were giving the expectation of that maybe not promising dates. So how can we be sure, if you didn’t know about this hiccup?”

“Well we’ve always said there’s three milestones on this path,” Dowden replied. “The first is getting the vaccine to the most vulnerable people by the middle of February and that’s what we did.

“The second was to get it to all over 50s and the most clinically vulnerable by the middle of April, we are very much still on course to deliver that and then finally the rest of the adult population by the end of July.

“It’s always the case with vaccines in terms of production that you will have ups and downs but we’ve factored that into the timeline we set out.

“We are confident that everyone will get invited in those first groups for the vaccine by the middle of April.”

“We can see the results of that, the death are falling, the hospitalisations are falling, we are getting this disease under control and that’s why it’s essential that when people get called up they go and get their vaccine,” the Culture Secretary explained.