The title may conjure up the supernatural, but this shrewd film contemplates the actual genocide perpetrated against Guatemala’s indigenous population 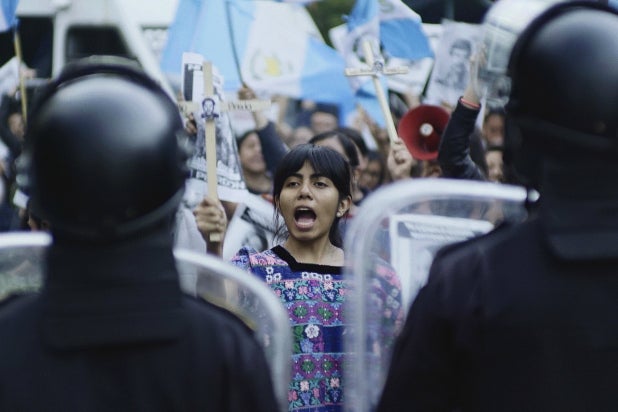 This review of “La Llorona” was first published following its premiere at the 2020 Sundance Film Festival.

For his third and most tonally adventurous feature to date, socially perceptive writer-director Jayro Bustamante repurposes one of Latin America’s most ubiquitous supernatural legends to fiercely examine genocide against indigenous people in his native Guatemala. Invoking genre narrative devices, the entrancingly evocative “La Llorona” (“The Weeping Woman”) walks between fact and myth to engender a shrewdly frightening piece of political horror.

Sadistic military dictator General Enrique Monteverde (Julio Diaz), a fictionalized incarnation of the country’s former president Efraín Ríos Montt, stands accused of sanctioning the murder of thousands of Maya Ixil people in the Central American nation between 1982 and 1983. Battling health complications but still refusing to accept any fault, Monteverde is found guilty thanks to the courageous testimony of Ixil women still mourning their dead. Bustamante shoots the courtroom as a spiritual confessional devoid of natural light.

Notwithstanding the evidence, Monteverde’s accomplices in power swiftly dismiss the verdict against the ailing villain. But the citizenry won’t obediently accept the impunity. Outside the lavish Monteverde home, protesters chant for justice. The mansion that once epitomized the esteemed family’s status is now a cursed prison for all those close to the acquitted criminal.

A chorus of voices demanding punishment for the atrocious killing campaign moves in as the new, incessant soundtrack of their lives. Sins of the past literally come knocking in this bona fide horror movie that harnesses ghosts as impalpable activists, but still fulfills its aim to strike terror into its audience — unlike the recent, disastrous American production “The Curse of La Llorona.”

Breathtakingly haunting throughout, “La Llorona” benefits from the subtle hand that its director employs to intertwine commentary on pervasive racism and corruption with episodes in which the eponymous entity, which in this case clamors for his tragically deceased children in the Ixil language, makes everyone inside the property question their sanity. An earthly mysticism, connecting the lore more to the indigenous worldview than to the Catholic notions of the afterlife, manifests visually through the recurrent presence of water and wind as elemental powers of change.

Nightmarish flashbacks put Monteverde’s wife Carmen (Margarita Kenéfic), a character who represents bigotry and unchecked privilege within this world, in the shoes of her husband’s victims. Though a mostly compelling concept with subtext galore regarding experiential empathy, these brightly colored segments could seem a tad obvious near the film’s resolution. Those versed on this folk tale’s details will probably anticipate the mechanics of some of its twists; however, it’s the historical lens through which they are being reinterpreted that enlivens and revamps them.

As part of the multiethnic and convincing ensemble cast, actress Sabrina De La Hoz, who was stupendous in Bustamante’s “Tremors,” returns now as Natalia, the conflicted daughter of a monster — and the mother of a child with a missing father — cautiously deciphering what to believe. “Ixcanul”‘s stern María Telón takes on the role of Valeriana, the loyal housekeeper who sticks around even when all other workers have vanished, while Juan Pablo Olyslager, the lead in “Tremors,” appears here briefly playing Letona, the general’s most trusted man.

Amidst the commotion, the embattled clan hires Alma (María Mercedes Coroy), an unnervingly quiet young woman whose intentions are unknown. In the nearly silent part, a remarkably inexpressive Coroy (who followed her on-screen debut in Bustamante’s “Ixcanul” with the English-language drama “Bel Canto”) speaks not in many audible lines but through piercing looks and static strength. When she looks at the camera, her unbreakable expression radiates otherworldly wrath. Later in the film, Coroy emerges from water bathed in moonlight and wearing a white dress. In that striking moment, one cannot discern whether she is an ethereal vision or a corporeal figure.

Framed with magnificent rigor, cinematographer Nicolás Wong’s compositions are both beautifully painting-like and enterprising, because their point of view — behind door frames, windows, and bunk beds — resembles the perspective of someone or something peeking at the characters from those positions. This excellently crafted camera placement in service of the mood also adds dynamism to a project with limited locations. Crystalline lighting choices, particularly at night with shadows of cool blue, magnify the eeriness that pool scenes here exude by design. It’s a conversation between below-the-line craft and performance.

Seeking to amass a community of storytellers with the same foresight, Bustamante has formed his own acting troupe. For many of the thespians in “La Llorona,” their careers began with him. He has nurtured these emerging talents, and in just a few years, with a trifecta of movies premiering at prime international festivals, they have exposed Guatemalan cinema to the global spotlight. If films are a force for change, there’s hardly a better case study than what Bustamante and company are sowing by digging into topics deemed controversial.

A purposefully somber cry for amends and acknowledgment permeated in phantasmagoric allure, “La Llorona” is genre-bending done right in a country reckoning with its recent trauma. Rather than being a single entity represented by Alma, Bustamante’s Llorona stands in for Guatemala as a whole, crying in unison for all the children it lost at the hands of those who swore to protect them. The mist that clouds their sight and keeps them away from a transparent future can only dissipate with the winds of truth.