“When Ben Falcone called me to say, ‘Hey, do you wanna be in a superhero movie and play a supervillain,’ what’s the first question you ask?” Bobby Cannavale posits, then answers his own question: “What’s my power? You gotta know what your power is.”

Falcone has directed wife Melissa McCarthy as a reformed white-collar criminal, a middle-aged co-ed and the savior of all humanity from an apocalyptic A.I. Now, they’re adding superhero to that list. “I’m a huge comic book fan,” the writer-director tells ET’s Kevin Frazier. “There’s really strong heroes and really strong villains, but I’m always fascinated with the people that are kind of in the middle and are a bit of an outcast.”

Thus, he created Thunder Force, which stars McCarthy and real-life best friend Octavia Spencer as estranged childhood friends forced back together to protect the world from super-powered bad guys. Spencer plays Emily Stanton, a scientist who discovers a “treatment” to turn regular people into superheroes, which McCarthy’s Lydia mistakenly undergoes in a shenanigans-filled mishap.

“I’d always dreamt of being a superhero,” Spencer says. “So, when two people you personally love and professionally admire bring you a script for a character that you’ve always wanted to play and it’s opposite the most versatile actress in the world — in my opinion — I’m just like, ‘Oh my god, this is going to be so much fun.’ And it actually was. It was so much fun.” 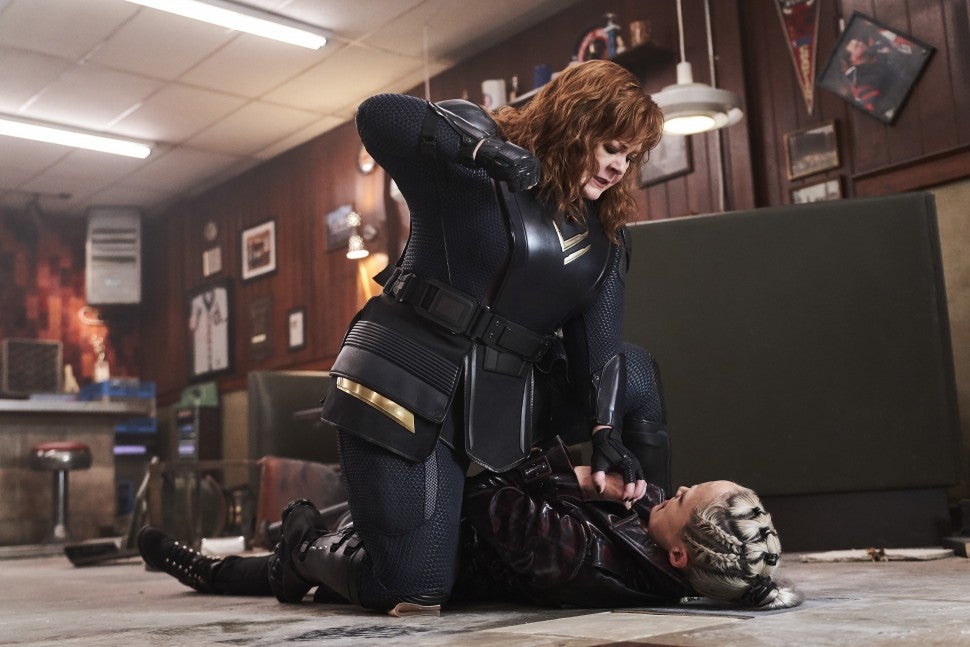 But back to the superpowers. McCarthy’s character winds up with super strength, while Spencer’s possesses the power of invisibility. Suited up as Thunder Force, they take the city by storm. The movie may be a comedy, but on set, both actresses were put through the gauntlet of filming a proper superhero spectacle: exchanging punches, handling explosions and being harnessed on wires. (For fight sequences and also sexual fantasies. You’ll see.)

“I don’t know why I prefer to be strung up and spun about a room, but I love it with my whole heart,” McCarthy exclaims. “Probably because I can’t do any of that stuff anymore. Like, I did gymnastics back in the day, and when I go up on wires, I’m like, I can still do back handsprings, watch this! I just don’t have to deal with gravity.”

“I’m not Melissa,” Spencer says for her part. “I don’t relish the idea of flipping around, cartwheeling and stuff. I had to take some training so it would be believable when the stuntwoman [did it], because she’s so good and so athletic. But not everybody is Melissa McCarthy. “

“You’re gentle,” McCarthy weighs in. “It’s one of your best things.”

The duo finds themselves up against Pom Klementieff’s Laser and Cannavale’s The King, who as Falcone told him on that first phone call, is “the strongest individual on the planet.” To play the part, Cannavale skipped the gym and was instead fitted with a custom-made muscle suit. “I did walk around like I was something, giving all the stuntmen dirty looks,” he laughs. “Even though they knew what I really look like under the suit.”

Both actors were tasked with wire work and fight sequences of their own. Klementieff, who is known for kicking ass onscreen in the Marvel Cinematic Universe — and will soon kick more in Mission: Impossible, which she booked while filming Thunder Force — set out to do as much of her own stunts as possible, while Cannavale happily left it to the pros.

“You take things for granted. Like, running. I just turned 50 last year, and it’s not to say that I don’t know how to run — I know how to run — but I can’t really run like these young guys,” he explains. “These stuntmen, they really know how to run. And ain’t nothing worse than seeing yourself run when you’re trying to look tough. It was pretty bad.”

“It’s true,” Klementieff confirms. “And when you shoot a movie, you have to do things so many times in a row that you can look good the first takes and then it doesn’t look as good. Someone who does that all the time is going to look better.”

“I find that that’s true about my acting,” Cannavale deadpans. “As it goes on, you just wanna move on.”