This week, after the stress of a strung out historical moment invaded our daily lives via endless poll tracking, ballot counting, and misinformation sorting, it’s kind of nice to set any worries, pessimism, and seriousness aside and watch “Moonbase 8,” a satisfying comedy about three astronauts-in-training who never leave the Earth. Cap (John C. Reilly), Skip (Fred Armisen), Rook (Tim Heidecker) are three equally doofy dudes, isolated in the desert, running a perpetual simulation of what it would be like to live on the moon.

The only difference is, well, nothing they do matters. They face zero consequences for their many, many mistakes. So if a scorpion crawls inside Cap’s helmet and he rips it off to avoid getting poisoned, he’s not going to suffocate or freeze to death or whatever fatal fate would befall him on the actual moon. He’s also not going to get a call from NASA, telling him to pack up and go home. He’s just going to writhe around in the sand, screaming into the void, looking like a goofball.

The pilot gets right to it, setting a brisk pace the series keeps up: Set in the not-too-distant future, NASA is preparing to build its first manned base on the moon and training potential moon-men via multiple Earthbound simulations. Cap, Skip, Rook, and a better-left-unnamed fourth astronaut are all working diligently to qualify for their first lunar mission. Each has a designated speciality (Cap is in charge of the water supply, Skip runs the greenhouse), but they all kind of do everything (and nothing) together. Even their rankings are trivial. Cap is the official leader, but he rarely exerts his power; right from the start, they all put the team — and the mission  — first. 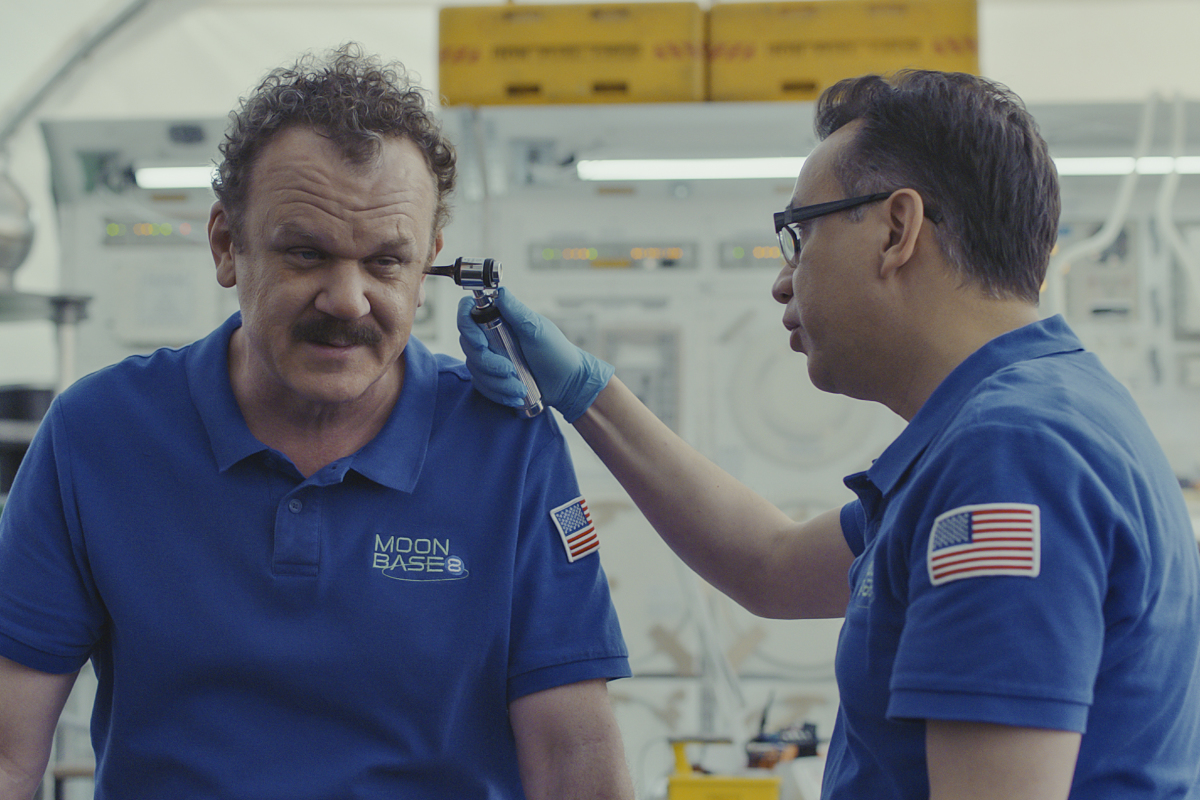 Courtesy of A24 / Showtime

Their attitude lends “Moonbase 8” a supportive, positive energy not unlike “Ted Lasso,” though Showtime’s comedy isn’t quite so inspirational, far less memorable, and often skews darker in tone. Most of the comedy stems from how bad these three are at executing their mission. A water shortage turns into an unnecessary and disproportionate catastrophe. A personal squabble brings about a tremendous amount of physical labor. When one of them gets sick, none of them understand the purpose or urgency of a quarantine — on Earth, or in space. Rampant, unpredictable escalation of relatively minor problems drives most episodes, before peace is brokered (or accidentally stumbled upon) and they go back to their normal routines.

Of course, the most obvious modern parallel to point out is the trio’s bubble. Alone and isolated outside of Winslow, Arizona, the crew only has a few rooms, their desolate outdoor expanse, and each other to keep them entertained, day after monotonous day. But, thankfully, “Moonbase 8” is a workplace comedy. Professional decorum, task management, and impressing the boss become the source of many jokes and keep the story moving forward. Most of us are alone with our families, not our colleagues, so only filmmakers, frat brothers, and NBA players should strongly identify with their close quarters co-working arrangement. If you want to pretend they’re all camping out to avoid catching COVID (just like you should be), by all means, but it’s easier to set that worry aside and just enjoy the show.

“Moonbase 8” isn’t trying to reinvent the wheel. It’s oddly well-suited, production-wise, to knock out episodes under the industry’s costly pandemic safety regulations — given its limited cast, singular setting, and minimal crew — but the series plays to its creators’ strengths while relying heavily on their chemistry. Odds are if you enjoyed Reilly’s rambunctious adult baby in “Step-Brothers,” the subtle silliness of Heidecker’s composed characters, or any one of Armisen’s unpredictable eccentrics, you’ll find plenty to smile about in six episodes. Unlike other ambitious adventures into the night sky, “Moonbase 8” is grounded; there’s room for creative expansion in future seasons, but this is a small-scale mission that’s off to a solid start. If you’re hoping for the moon, well, maybe this isn’t the space show you’re looking for.

“Moonbase 8” premieres Sunday, November 8 at 11 p.m. ET on Showtime. All six episodes of Season 1 will be available on-demand as well as via Showtime’s streaming service. The premiere episode will be made available at midnight for free.

END_OF_DOCUMENT_TOKEN_TO_BE_REPLACED

END_OF_DOCUMENT_TOKEN_TO_BE_REPLACED
Recent Posts
We and our partners use cookies on this site to improve our service, perform analytics, personalize advertising, measure advertising performance, and remember website preferences.Ok