Alex Jones and Rylan Clark-Neal were back on The One Show tonight with performer John Barrowman who is currently in lockdown in Palm Springs with his husband Scott. However, as Rylan expressed how big a fan he was of John and his role in Dr Who, the performer told Rylan he could come and visit, but there was a very strict rule he would have to abide by.

Rylan began: “Now John listen. I had you on my radio show recently and you know I am the biggest Dr Who fan.

“Captain Jack Harkness is my favourite, but allegedly you have let something very scary into your social bubble?”

As Rylan said this a full-size Dalek entered John’s living room and Alex and Rylan both jumped in their seats.

Rylan asked: “Is that the dog operating that or Scott? John, I thought the dog was doing that then.” 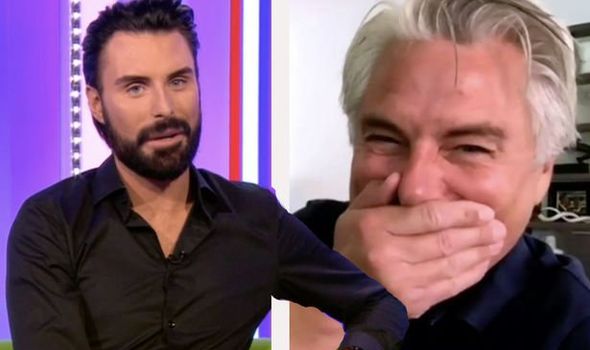 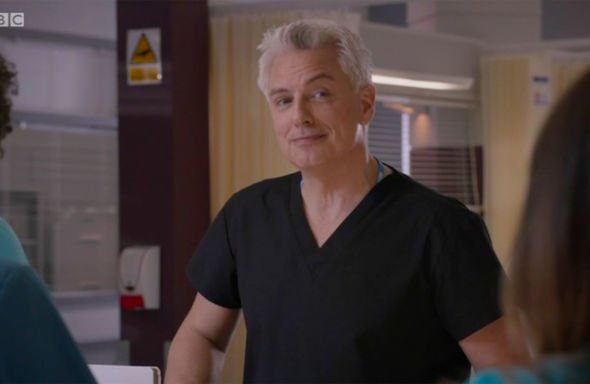 He added: “John for a second there I genuinely thought the dog was operating the Dalek.”

Alex quickly interrupted and said: “You are just jealous, you would love that.”

Rylan agreed: “I am genuinely very jealous and I am thinking maybe we should move out there.”

John quickly butted in and said: “When this is all over you come to Palm Springs and I will let you inside the Dalek.

“You can go around Palm Springs and I will film you.” 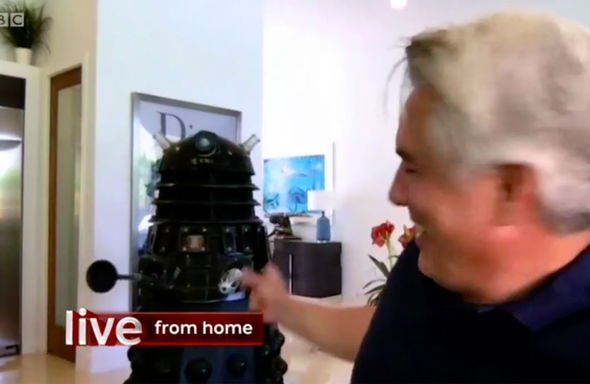 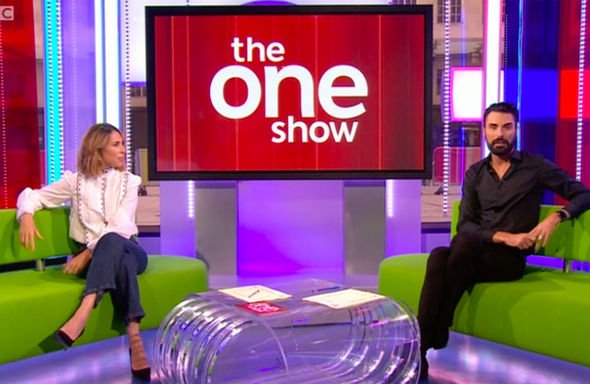 Rylan was ecstatic by the offer and shouted at the production crew: “Book the flight. Get that flight sorted!”

But, John had a very specific requirement that Rylan had to fulfil before he went to stay.

John explained: “But you have got to wear the appropriate swimsuit.

“It’s because it’s hot inside and you need to be ready to jump in the pool.”

Rylan was all flustered and quickly said: “Oh it’s taken a turn. We will get back to you later.”

He told Alex and Rylan: “I will be playing a character called Drew Nicholson-Heath and he comes from a very good background.

“He’s a surgeon and very good at his job, but he works in Dubai and he’s come to Holby City to poach some of the doctors to come to this other hospital.

“But whilst he is at Holby, he notices that something isn’t right and that there are things going on, well he discovers something is wrong.

Alex introduced a clip from next week’s episode, but when they came back it was John’s turn to get a little bit embarrassed.

As Rylan went to ask another question Alex interrupted and said: “You look very attractive John in Holby City, it must be said.”

John didn’t quite know how to respond and was quiet for a moment, so he very quickly thanked her and tried to move the show on.
The One Show airs on BBC One weekdays at 7pm.

END_OF_DOCUMENT_TOKEN_TO_BE_REPLACED

END_OF_DOCUMENT_TOKEN_TO_BE_REPLACED
Recent Posts
We and our partners use cookies on this site to improve our service, perform analytics, personalize advertising, measure advertising performance, and remember website preferences.Ok