During Sunday’s episode, Channel 4 hosts Simon Rimmer and Tim Lovejoy kicked off the show by introducing guests Miranda star Sarah Hadland, actress Susanna Fielding, Ghosts actor Kiell Smith-Bynoe and singer Imelda May to the show. Katie Piper also appeared via video link to chat about her new storybook collection and podcast. However, things soon took a turn when Simon was demonstrating how to cook a Gnocchi dish.

“Gnocchi, when it comes to the surface, you pop it straight in your frying pan. I mean you don’t have to, but there’s something nice about fried potato,” Simon explained as he fried the Gnocchi in a pan of oil.

“What you get is this nice colour on them and again, when they go into the pan don’t shake them around, be brave, let them kind of sit there.

“You want to get them coloured on all of the surfaces.

“Obviously, we are running out of time, so we haven’t got time to do that.” 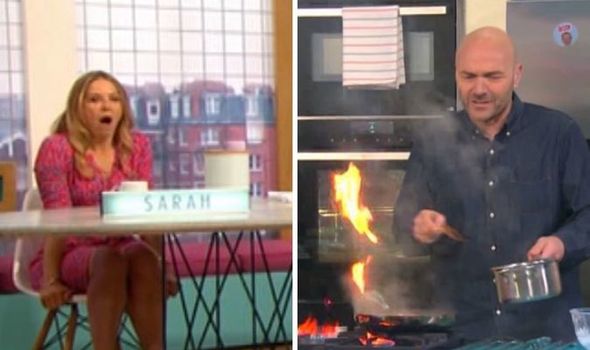 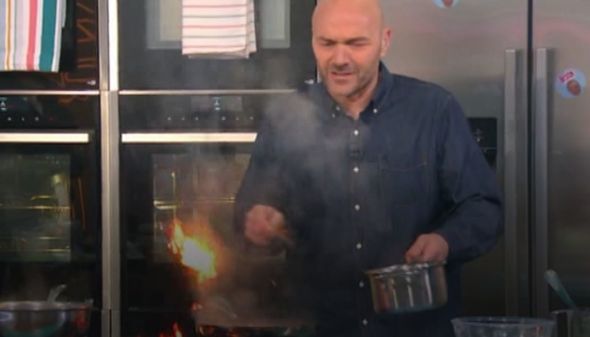 The TV chef began pouring a tomato-based sauce into the pan which is when things went a tad wrong.

As he did, flames from the hob began to rise, although, while his guests looked on in shock, Simon didn’t seem to be bothered at all.

Actress Susanna put her hands over her mouth, while Sarah just sat there with her mouth open in shock.

“Fire,” Tim chipped in as Simon continued to stir the dish casually. 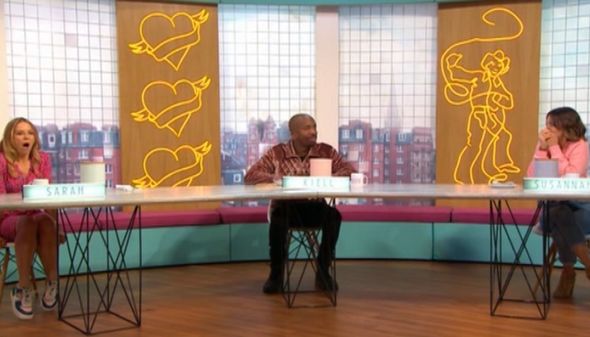 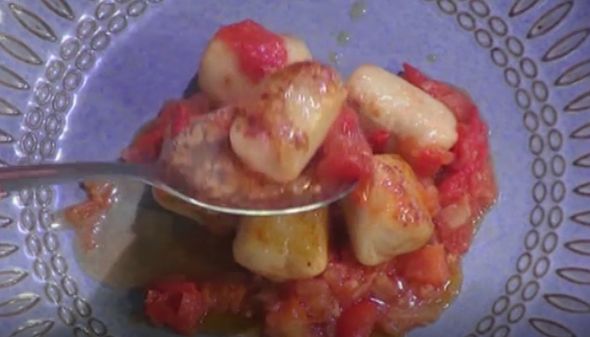 Simon continued with the dish as if nothing had happened, as he explained: “What we do is serve.

“You don’t need loads of this, it’s pretty rich stuff.

“We always serve kind of too much pasta, Gnocchi, and all the Italian things that they have small portions of.

“We just put too much in there so we have a little serving.”

The chef then went to add some homemade pesto on the top before grating Italian cheese to complete the dish.

Elsewhere in the programme, some viewers were left baffled by another cooking demonstration Simon did.

At the beginning of the show, the 57-year-old demonstrated how to make sweetcorn wings.

He went on to admit to viewers that the dish doesn’t really exist as he made it up.

“As we know sweetcorn doesn’t have wings and they don’t have ribs.”

As he served up the dish to his guests, he told them: “Basically, what you’ve got is deep-fried sweetcorn with a nice bit of ranch dressing to dip in.

“The flavour is delicious and as I say, just be careful if you’re going to buy the raw sweetcorn…”

As he tasted the dish, Tim commented: “I do like the idea of that, and I like the taste.”

Sunday Brunch airs on Sunday at 9.30am on Channel 4.