Home » TV & Movies » Where Is Anne Frank Review: A Visionary Animated Update of a Holocaust Story That Needed Retelling

Where Is Anne Frank Review: A Visionary Animated Update of a Holocaust Story That Needed Retelling

“School Ties” had a great run, but substitute Hebrew school teachers of the world finally have a new movie to play on the old tube TV they always roll in from the storage closet. Don’t groan just yet: Despite the fact that it’s both destined and explicitly designed to become an educational tool for the next generation of Jewish tweens, Ari Folman’s “Where Is Anne Frank” is such a vital, creative, and sociopolitically urgent modernization of a classic Holocaust story that most kids won’t notice or care that it exists in the service of clear moral instruction. They may not even ask why the film’s title is missing a question mark.

As anyone familiar with Folman’s previous forays into animation (“Waltz with Bashir” and “The Congress”) can imagine, this is no ordinary cartoon rendering of the unimaginable. In the context of the director’s body of work, perhaps the strangest thing about “Where Is Anne Frank” is that it tries so hard not to traumatize kids for life.

This project was first conceived in 2009, when the Anne Frank Fonds Basel — distressed by rising Holocaust denialism, and rightly concerned that its namesake’s story might need to be reinvented in order to reach young people of the digital age — commissioned Folman to make a film that would cut through the noise. It was an inspired choice regardless of the finished product, as the work that Folman had already made at that point reflected a rare gift for using animation to bridge the gap between past and present, trauma and identity, memory and action.

The Foundation was keen on the idea of highlighting Anne’s imaginary friend Kitty, to whom her diary is addressed, and Folman ran with that concept like it was a stick of lit dynamite. As sophisticated as “The Congress” despite its inherent didacticism, and as conceptually brilliant as “Waltz with Bashir” (while lacking its emotional gut-punch), Folman’s latest film begins on a dark and stormy Amsterdam morning “a year from now,” when a crack of thunder causes the glass around Anne’s diary to explode onto the floor of the museum that stands in the building where the Franks hid from the Nazis between July 1942 and August 1944.

The ink lifts off the pages through some unknown sorcery and swirls together until Kitty — a freckled 13-year-old girl with an unruly tuft of red hair — has materialized from Anne’s letters. Confused yet resourceful, Kitty is invisible to visitors while she remains in the exhibit (Justin Bieber’s howler of a cameo reinforces Folman’s delightful fixation on the open-source imagery of public figures) and ribbons apart whenever she’s too far from the diary, but it isn’t long until she’s roaming the streets of a near-future Netherlands with the book in hand and trying to make sense of her late best friend’s legacy. 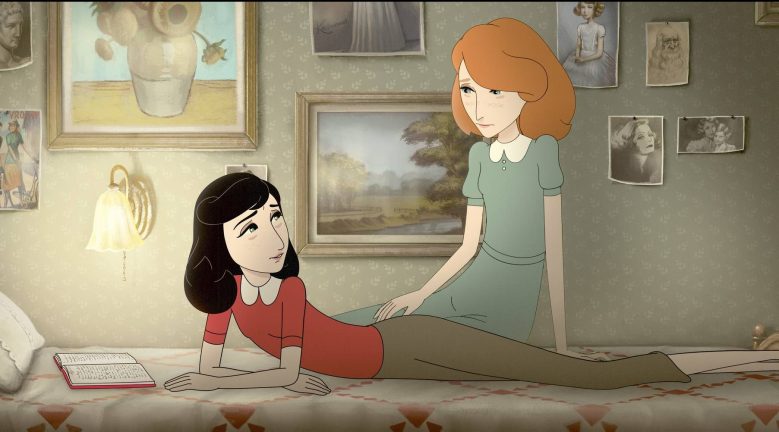 “Where Is Anne Frank”

Rather stiffly voiced by “Bridgerton” star Ruby Stokes (par for the course in a movie where the vocal performances are tinged with the same exaggerated affect of edutainment that Folman works so hard to strip away from the rest of it), Kitty is convinced that if she’s still alive, Anne must be as well. The reality of the situation is sadly a bit more complicated. Although Anne’s name is affixed to just about every bridge, library, and theater in Amsterdam, the city doesn’t seem to have internalized the most poignant lessons of her short life.

The first new friend Kitty makes is a pickpocket named Peter (Sebastian Croft), but when he’s not acting as the ringleader of a “Jet Set Radio”-inspired trio of anime thieves, he runs a shelter for undocumented refugees who face a threat of deportation similar to that which shadowed the last years of Anne’s existence. The Dutch police may not be as violent as the Nazis, nor subscribe to the same genocidal ideology, but the fate these refugees are hiding from is ultimately not far removed from that which found Anne in Bergen-Belsen, and 1.5 million other Jewish children elsewhere in Europe.

Likewise, the humanity required to spare these kids — who are personified by a young Malian girl named Awa — is not so different from that which moved Otto Frank’s most trusted helpers to hide their boss’ family in the attic above their office. Just because evil doesn’t goose step through the city streets in a phalanx of 15-foot supersoldiers (as they are in Folman’s heightened, Art Spiegelman-esque depiction of Hitler’s forces) doesn’t mean it isn’t evil.

While Folman devotes ample time to Anne herself, voiced by Emily Carey in a series of lush and upbeat flashbacks that stand out from the gray monochrome of the contemporary plot (an inversion of the way that historical movies tend to sour the past), these scenes primarily exist to reaffirm that Anne Frank existed in the first place. That she was a real girl who crushed on Clark Gable, laughed at her neighbor’s farting wife — Folman has no interest in the sacrosanct — and pretended that her family’s hideaway was actually a snow-covered Swiss chalet in the mountains somewhere. Folman underscores the fact that Anne wasn’t special because she was some kind of saint, but rather because her imagination allowed her diary to take root in our imagination, and perhaps even save us from our failure to imagine that such history might repeat itself.

That context is necessary, even if only for Kitty. In one of the film’s most crucial moments, Anne tells her imaginary friend that she was dreamt up as her antithesis; Kitty isn’t Jewish because Anne wants her to be unlike herself in all of the ways that matter. When asked what being Jewish entails, Anne responds that “Being Jewish means making a decision that you’ll take on the Jews’ destiny and their history.” Kitty enthusiastically agrees to those terms, and “Where Is Anne Frank” is at its most clever and forward-thinking in the contemporary passages where the fictional girl finds that destiny and history are as inextricable from each other as she is from Anne’s diary.

Folman is determined to make the film’s lessons digestible in a way that won’t cause jaded young people to roll their eyes or look at their phones; one telling scene sees a group of schoolkids watching YouTube videos during a stodgy production of the Anne Frank stage play, which Kitty promptly interrupts in a way that makes everyone snap to attention. Impish to the core and never above relying on pure razzmatazz to get a rise out of his audiences, Folman allows Kitty to get into high-speed ice skate chases, melt into Miyazaki-like ink blots, and even fall in love.

Lena Guberman’s rich and playful animation is always up to the task of bringing such action to life. She flirts with myth and caricature in a way that flattens history into imagination, and the flashback scenes unfold against a backdrop of physical miniatures, a subtle masterstroke that helps grip the entire film in an unshakeable sense of reality. If the characters can seem a bit stiff by comparison, it’s hard to say if the animation style is at fault, or if Folman — whose previous films orbited around characters to the same degree that this one is driven by them — is just better-suited to more abstract narratives.

The lack of emotional oomph is a sore spot for a movie that exists to galvanize its morals into actionable feeling. Conscious of his intended audience and careful not to traumatize them more than necessary, Folman makes a concerted effort to filter Anne’s final days through the kind of mythic imagination that she might have appreciated, but it would have been impossible to soften that aspect of the story without lessening the impact of the contemporary half as well. In lieu of a knockout blow, “Where Is Anne Frank” is left to settle for a certain tenderness, much of which is provided by the coo of Karen O’s singing voice as it swims along the surface of the gentle score she co-wrote with MGMT keyboardist Ben Goldwasser.

But “Where Is Anne Frank” doesn’t need to be “Grave of the Fireflies” in order to satisfy its purpose, especially when the story it tells proves to be every bit as damning as it is didactic. Here is a film that’s less about Anne Frank’s actual diary than it is the zillions of copies that were printed of it after her death and taught to generations of children around the globe; a film that strives to imagine what Anne Frank would make of a future in which the whole world knows her name, and precious few people remember why they learned it. “What could be more useful than my memories?” she asks Kitty. They were her gift to us, and Folman does a valiant job of repackaging them in a way that might remind future generations of their value.

“Where Is Anne Frank” premiered at the 2021 Cannes Film Festival. It is currently seeking U.S. distribution.