Sets of 120,000-year-old footprints belonging to humans have been discovered in Saudi Arabia.

The set of seven human footprints, found around an ancient dry lake in the northern region of Tabuk, are the earliest evidence of humans in the Arabian peninsula.

Experts believe they are the footprints of at least two people, and say they could help understand the routes taken by humans out of Africa. 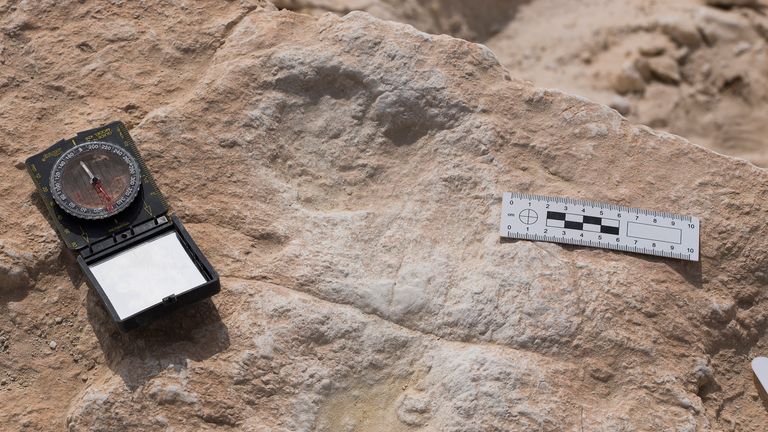 The new research suggests “inland routes, following lakes and rivers, may have been particularly important to humans” leaving the continent, according to Mathew Stewart from the Max Planck Institute for Chemical Ecology

He added: “Footprints are a unique form of fossil evidence in that they provide snapshots in time, typically representing a few hours or days, a resolution we tend not to get from other records.”

The researchers think the footprints belong to modern humans, on the basis of stature and mass inferred from them, rather than Neanderthals, who aren’t known to have been in the region at the time.

Mr Stewart said: “We know that humans were visiting this lake at the same time these animals were, and, unusually for the area, there’s no stone tools.

“It appears that these people were visiting the lake for water resources and just to forage at the same time as the animals.”

Footprints of elephants and other animals were also identified alongside 233 fossils.

Today, the Arabian peninsula consists of vast deserts which would have been uninhabitable for early humans and the animals that they hunted.

However, over the last decade, researchers have found that the area experienced much greener and humid conditions due to natural variation in the climate.

Richard Clark-Wilson, from Royal Holloway, University of London, said: “At certain times in the past, the deserts that dominate the interior of the peninsula transformed into expansive grasslands with permanent freshwater lakes and rivers.”

“The presence of large animals such as elephants and hippos, together with open grasslands and large water resources, may have made northern Arabia a particularly attractive place to humans moving between Africa and Eurasia,” added Michael Petraglia, from the Max Planck Institute for the Science of Human History.

END_OF_DOCUMENT_TOKEN_TO_BE_REPLACED

END_OF_DOCUMENT_TOKEN_TO_BE_REPLACED
Recent Posts
We and our partners use cookies on this site to improve our service, perform analytics, personalize advertising, measure advertising performance, and remember website preferences.Ok