180,000 in Hong Kong remember Tiananmen as fear of Beijing grows

Hong Kong: It was the first time Wing Or had come to the June 4 vigil, and it was concern that Beijing is tightening its grip on Hong Kong that was the spur.

Accompanied by his daughter, Wing was among a huge crowd of180,000 people to commemorate the 30th anniversary of the Tiananmen Square massacre at Victoria Park on Tuesday evening, holding candles and singing. 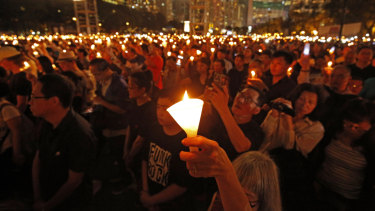 Hundreds of thousands of people attended a candlelight vigil to remember Tiananmen Square at Victoria Park in Hong Kong on Tuesday.Credit:AP

His daughter was born and raised in Sydney because the family left Hong Kong for Australia as the 1997 handover from Britain to China loomed.

Now, those earlier fears of Beijing encroaching on Hong Kong's liberties may be realised, Wing said. Many others at Tuesday's vigil expressed similar concerns.

"A lot of Hong Kong people believe in democracy because they were under British rule for so long," he says.

A controversial extradition law that would allow criminal suspects in Hong Kong to be sent to mainland China to face charges is being pushed through the Legislative Council by chief executive Carrie Lam.

There is suspicion it could be used to extradite dissidents and political opponents, and will remove a so-called "firewall" between the Hong Kong and mainland China legal systems.

Wing say the extradition law provided "an extra reason" to come out on June 4.

For the young, another impetus was the recent jailing of many of the leaders of the 2014 Umbrella movement. 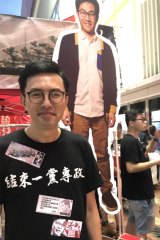 Chairman of the League of Social Democrats Avery Ng at the rally in Victoria Park.

Avery Ng, a former Melbourne University student who gave up his Australian passport to run for political office, is one of the young democracy activists on the firing line of Hong Kong's tougher approach to dissent.

Chairman of the League of Social Democrats political party, Ng was convicted in March over his role in a protest by hundreds of people outside Beijing's office in Hong Kong in 2016. He will be sentenced in September and likely faces jail.

Young student activists had boycotted the June 4 vigil over the past five years, wanting to distance themselves from anything to do with Beijing. But this year the attitude has changed.

"I believe that especially with the extradition bill, people are now starting to realise you can't just take care of yourself and think of Hong Kong in isolation," he said.

"The Chinese communist party is finding ways to suppress our freedoms. It is important to treasure our freedom of speech and pay respect to those that sacrificed their lives."

Nicole Ng, 18, handing out flyers for her school student activist group as crowds made their way to Victoria Park, said students need to learn more about June 4. "They were also student leaders, just like 2014. We can learn from the experience of history. We have a long path and a tough fight ahead for democracy," she said. 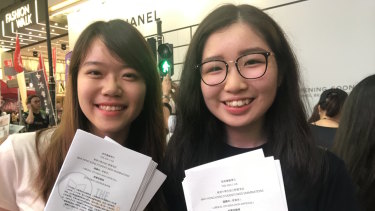 The June 4 vigil has been held every year since 1990, and is the only public gathering to remember the Tiananmen Square crackdown that is allowed on Chinese soil.

The organisers on Tuesday evening said the crowd had reached a peak of 180,000, up significantly from 115,000 last year and the biggest turnout since 2014. The park was filled to capacity, with latecomers that continued to stream out of the subway station diverted to an overfill lawn.

Reverend Chu yu-ming, who was convicted for his role in organising the Umbrella Movement but escaped a jail sentence in April, addressed the June 4 vigil. Chu had been a key figure in Operation Yellowbird, the underground network that helped Tiananmen Square student leaders on Beijing's wanted list to flee the country.

Choi Ling, 64, said she came to the vigil on Tuesday evening for the first time in many years because of the extradition law and concern that Hong Kong's freedoms guaranteed under 'One Country, Two Systems' were under threat.

"What China promised – a referendum – they snatched away," she said.

One of the Tiananmen Mothers, Zhang Xianling, mother of Wang Nan, told the Hong Kong vigil that 56 mothers had already passed away but they would continue to fight for truth, compensation and official accountability for the loss of their children in the 1989 crackdown. "Lies cannot conceal the blood," they said.

Hong Kong chief executive Carrie Lam on Tuesday dismissed concerns that she will do Beijing's bidding on the extradition law.

Another protest march against the extradition law will be held in Hong Kong on June 9.