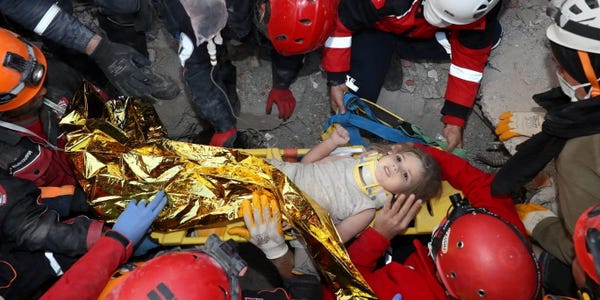 Earthquake rescuers in Turkey have pulled a three-year-old girl out from the ruins of an apartment building, 91 hours after it collapsed, according to the Associated Press (AP).

Ayda Gezgin is one of 107 people rescued so far since the earthquake struck the Aegean Sea on Friday afternoon, hitting the Turkish coast and, less severely, the Greek island of Samos.

Various monitoring agencies in the US and Turkey have rated the earthquake's severity between 6.4 and 7, according to the AP.

In the Turkish city of Izmir, Rescuer Nusret Aksoy told reporters he found Gezgin trapped in a tight space next to a dishwasher, after hearing a child's scream as he searched the rubble of the eight-story building, the AP reported.

She was pulled out to cries of "God is great!" according to the AP. Aksoy said: "I got goosebumps and my colleague Ahmet cried."

Turkish Health Minister Dr. Fahrettin Koca tweeted a video of the girl wrapped in a foil blanket on a stretcher, introducing herself as "Ayda" to a rescuer.

The Turkish Red Crescent tweeted a picture of a young girl being kissed on the cheek by a rescuer, purportedly showing the moment of Gezgin's rescue.

Turkish President Recep Tayyip Erdoğan tweeted a picture of the rescued girl holding a doll, calling her a "miracle" and saying: "get well soon beautiful baby."

Gezgin is not the first child rescued from the disaster. On Monday, 14-year-old Idil Sirin and three-year-old Elif Perincek were pulled alive from two separate buildings in Izmir, the AP reported. Sirin's eight-year-old sister did not survive, according to the AP.

The death toll from the earthquake has reached 105, with 144 people hospitalized as of Tuesday morning local time, according to the Anadolou News Agency.

END_OF_DOCUMENT_TOKEN_TO_BE_REPLACED

END_OF_DOCUMENT_TOKEN_TO_BE_REPLACED
Recent Posts
We and our partners use cookies on this site to improve our service, perform analytics, personalize advertising, measure advertising performance, and remember website preferences.Ok